Naval base shooting sends 2 to hospital 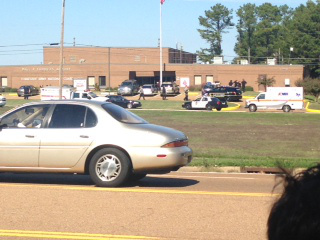 (CNN/WREG) — Two people were shot and wounded in a fight at a Tennessee National Guard office outside Memphis, military officials reported Thursday.

It happened just before 12:50 p.m. at the Army National Guard Recruiting center on Attu Street.

Sources told WREG that the shooting was prompted by the firing of a recruiter, who came back to work with a handgun and shot two of his superiors.

The suspect, who sources later identified Amos Patton, a Sergent First Class and a seasoned recruiter, was taken into custody by other guardsmen.

The Navy facility was on lockdown after the shooting, but there was no “active shooter situation” in progress, the Navy reported via Twitter. The lockdown was lifted shortly afterward.

Click here to read more on this story from WREG in Memphis.