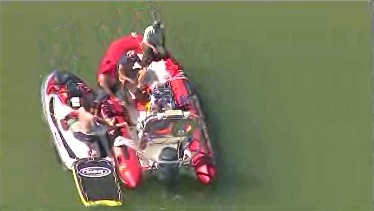 GALVESTON, Tex. (WTVR) — The victims on board a World War II era plane that crashed late Wednesday morning in Galveston have been identified.

KHOU reports the passenger was 66-year-old John Stephen Bugsby, a United Kingdom resident who was visiting Texas with his wife to celebrate their 41st wedding anniversary. He had paid nearly $2,000 to ride on the plane.

The pilot was 51-year-old Keith Hibbett of Denton.

“This is by far one of the most difficult things I’ve ever gone through. Our pilot was like a brother to me,” said Larry Gregory with the Lone Star Flight Museum, which owned the plane. “He’s taught me a lot about flying and everything else. And it’s just devastating.”

Witnesses on a charter boat reported seeing the plane go down around 11:40 a.m. near Galveston’s West End in Brazoria County.

Jennifer Spaulding was on another boat and she heard the impact.

“We saw the water spraying up in the air, but we never saw what it was,” Spaulding said. “We never saw a plane go down or anything, so we didn’t think anything like a plane. We just figured it was a boat.”

The pilot was not in contact with the island’s air traffic control tower at the time of the crash, FAA spokesperson Lynn Lunsford told the Galveston County Daily News.

Coast Guard helicopters and boats searched Chocolate Bay for over an hour before locating the debris and victims.

The FAA will investigate the cause of the crash.

The plane was called “Galveston Gal” and was painted to resemble a plane with the same name that flew missions to support bombers during World War II. A seat was added so that pilots could carry tourists on flights over the bay.

The Galveston Gal was one of dozens vintage planes that entertained crowds at the annual Wings Over Houston Air Show.

“My heart and the hearts of the Commemorative Air Force, our air show staff and many others are heavy. We are a brotherhood and sisterhood of people who are passionate about preserving aviation history and honoring our veterans who served our country,” said Wings Over Houston Director Bill Roach. “And we are united in our desire to share this passion with our others through museums, air shows and other events throughout the United States.”

The plane recently returned from an air show in Fort Worth.