RICHMOND, Va. – Residents of the Mosby Court public housing complex are able to make a difference in the upcoming gubernatorial election through the help of the ASPiRE program at VCU.

Nannette Bailey, the community outreach coordinator of the program, recently went door to door along with students and volunteer residents in the neighborhood east of downtown, asking residents if they are registered to vote. On Election Day, her team will shuttle residents to the polls as well. 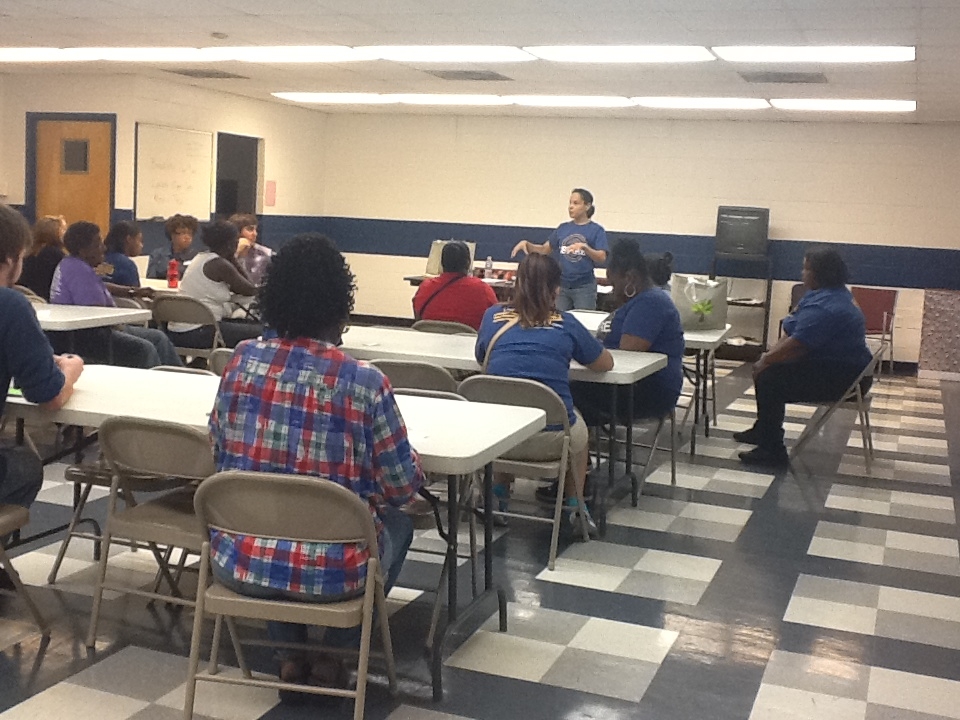 Bailey said there was a good turnout of voters from the neighborhood in last year’s presidential election, but a considerably lower number of residents voted in the gubernatorial election in 2009.

“We looked at the data from the last gubernatorial election, and it was much lower, which I think is probably typical when it’s not a presidential election,” Bailey said. “But as you can see, there are certainly a lot of folks out here who are eligible to vote, so we’re trying to increase those numbers.”

Mosby is comprised of four sections of public housing units with a total of 1,000 people. Walking and knocking on each door can prove to be a difficult task. ASPiRE members kept a cheerful spirit as they walked by 84 units in an hour. They plan to walk through each section again before Election Day to make sure residents show up at the polls.

Darlene Crutchfield, a Mosby resident of two years and an ASPiRE volunteer, said they made good progress, and she’s hoping for the best turnout possible at the polls.

“There were a lot we did not get to, but they don’t open the doors. So, maybe on our next trip back we can get a whole lot more,” she said. “But we did great, we got a few to register to vote, and this is only the beginning. We just got to keep on keeping on.”

Members also provided registration forms and information regarding restoration of voting rights. With the new Voter ID laws set to take effect next year, voters will soon be required to show a photo ID at the polls for any election in Virginia.

Betty Allen, a Mosby resident of seven years and also an ASPiRE volunteer, said she doesn’t think the new laws will affect certain populations of voters such as minorities, the elderly or the poor.

“No, I don’t think that would bother them none,” she said. “That will be interesting.”

But Bailey thinks the new photo ID law could definitely be a problem for some in the Mosby Court neighborhood.

But many residents seemed more concerned with the restoration of their voting rights as convicted felons. Gov. Bob McDonnell has now made this possible by restoring voting rights to non-violent felons on a case-by-case basis that began last spring.

Bailey said many forms are online, but are not easily accessible to Mosby Court residents as not all of them have Internet access.

She said her program is happy to provide any necessary paperwork residents need to be able to vote again.

“We have information for restoration of rights, we have the phone numbers that you can call, we have the form that you have to fill out to be mailed in,” she said.

Along with providing voter registration forms and restoration of rights information, the ASPiRE program will also offer to run a shuttle service from Mosby Court to the polls on Election Day on Nov. 5.

“It’s a good walk to the polls, so that’s a deterrent for folks,” Bailey said. “Last year, I estimate that we took about 100 people to the polls via rides.”