RICHMOND, Va. – As federal employees return to work today, their anger over 16 days of government shutdown does not seem to subside any time soon.

“I really do think that some of the people in Congress don’t mean us any good, and they need to be voted out. Plain and simple,” said Ann Taylor of the American Federation of Government Employees. Taylor, who represents federal workers in the Department of Housing and Urban Development, said it shouldn’t have taken so long to see that employees were suffering. She felt Congress didn’t care about the federal workers.

Furloughed employees had demanded the end of the shutdown at a rally at Kanawha Plaza in Downtown Richmond on Wednesday afternoon. They were furious as they shouted chants begging for an end to the government shutdown that was finally resolved Wednesday night by votes of the U.S. House of Representatives and the U.S. Senate. 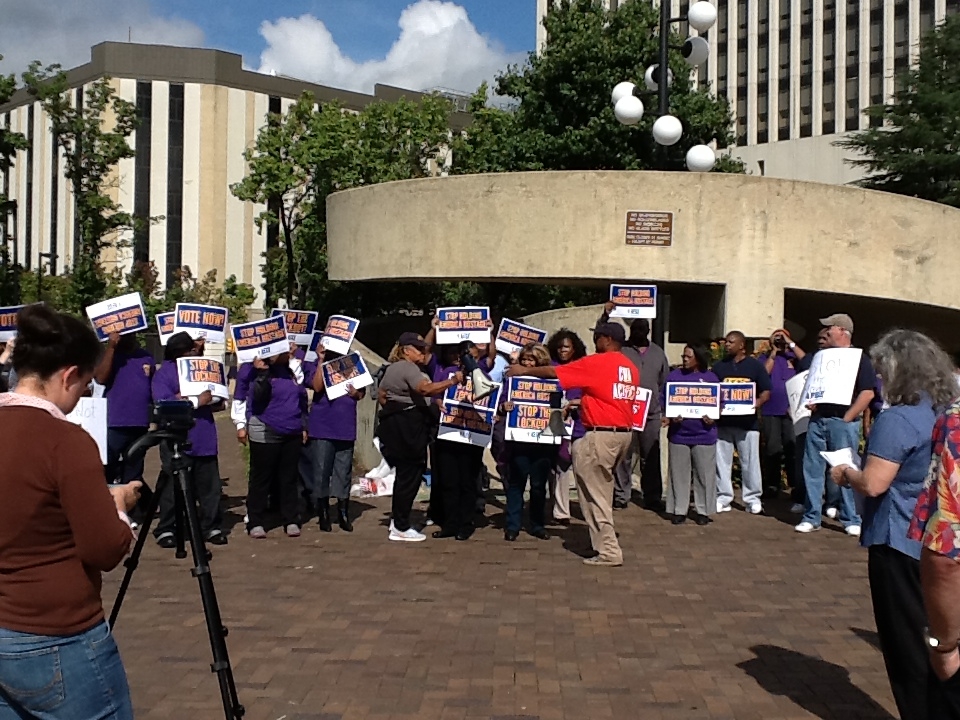 Ray Davenport, secretary-treasurer of the Virginia AFL-CIO, said the shutdown hurt the economy, small businesses, and federal workers that are in most instances loyal employees.

“Many times the federal workers are being used as punching bags, and they, however, in the large majority of cases are extremely dedicated public servants,” he said.

Although the government is now open, Taylor said the damage has already been done to thousands of federal workers, veterans and their families. She said many federal workers had been sitting at home wondering how they were going to pay their bills.

“We’ve had employees who have been put in the hospital, had strokes, heart attacks, and we heard that one employee actually committed suicide. And that’s how serious this is,” Taylor said.

Barbara Gordon, a federal worker for The Department for Housing and Urban Development, said she is outraged at the devastating effects the shutdown has had on federal workers. She said she just wants to get back to doing her job of providing services to the community.

“I want to help those persons that are homeless, veterans that need houses and persons that can live in our Section 8 houses. We cannot answer the phone, and I’m sure we’ve missed a lot of calls because of the shutdown,” Gordon said.

Mary Player, another federal worker for the The Department for Housing and Urban Development, said although the shutdown has affected federal workers economically, they all want to continue being devoted workers to help make up for lost government revenue.

“They want to get back, and they want to receive their money, and when they go back and get their paycheck that’s putting money back into the economy,” Player said.

Gordon believes that members of Congress were not helping the situation, offering empty promises over the last two weeks of coming up with a deal to reopen the government. She said people need to start exercising their right to vote.

“We need to vote. Every person has the right to vote. These persons are not helping, and we need to vote them out,” Gordon said. “We need persons in Congress, persons in the Senate to do their jobs.”

Electing representatives who can get the job done and who care about the needs of people was the unified demand of the federal employees at the rally.

When it comes to making sure that a government shutdown does not happen again, Player has a simple suggestion.

“I think we can prevent it from happening again in the future by congressmen working together,” she said.