Duggar to McAuliffe: Drop out of the race

RICHMOND, Va. (WTVR.com) – Reality TV-star Jim Bob Duggar and his family are going all out for Republican Ken Cuccinelli in a statewide tour, demanding that his opponent quit his campaign for governor.

“I am asking Terry McAuliffe to drop out of the race,” said Duggar in an interview with the VCU “iPadJournos” project at a campaign event at the State Capitol in Richmond on Tuesday. Duggar, who stars with his wife Michelle and his 19 children on TLC’s show “19 Kids and Counting,” is touring the state with the conservative organization Family Research Council Action in an attempt to get Cuccinelli elected governor on Nov. 5. 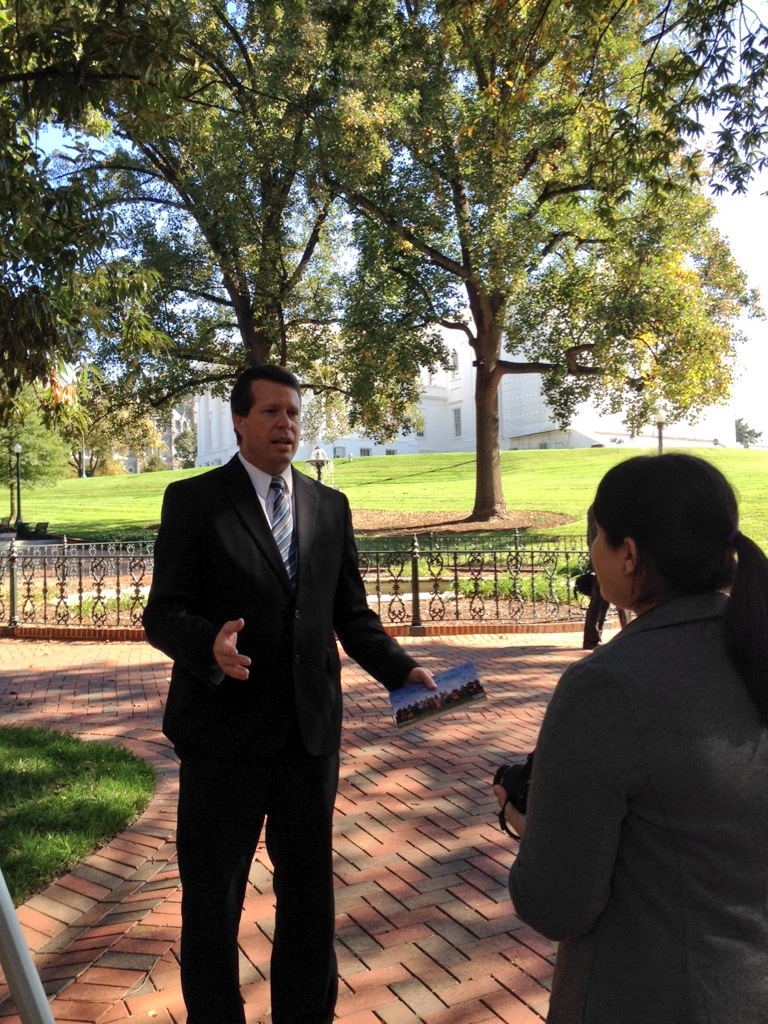 Duggar accused the Democratic gubernatorial candidate to have been part of a scandal that involved scamming terminally ill patients. He referred to McAuliffe’s investment in a Rhode Island estate planner, who was convicted for defrauding insurers by taking patients’ identities.

“They were going and picking out these policies, giving the patient maybe a few hundred dollars and then they were collecting all the life insurance benefits from these people,” said Duggar. “[McAuliffe] used them as a pawn to benefit himself.”

While McAuliffe has pointed out that he was a passive investor with no knowledge of these business practices, the Cuccinelli campaign has run ads this week that called McAuliffe “despicable” and a “corrupt insider.”

Duggar believes this “scandal” should be reason enough for McAuliffe to drop out out of the gubernatorial race.

“This is something he didn’t disclose when he was running for governor in 2009,” the reality TV star said. “It’s totally against everything that the people in Virginia believe in and the people in America believe in.”

Duggar’s status as a reality TV star may bring more attention to McAuliffe’s involvement in the case, but Duggar’s main focus is to draw as much support as possible for Cuccinelli’s campaign.

“Tonight he’s going to be coming over here to campaign and we’re going over to Virginia Beach, so we’re swapping places,” said Duggar at the Richmond event before heading to Virginia Beach. “We’re trying to cover two areas at once.”

Republican candidate for Lieutenant Governor E.W. Jackson attended the event with the Duggar family at the Capitol, emphasizing the importance of this election.

Jackson’s appearance concluded in a prayer led by the candidate. The Duggar family showed its support for Jackson by chanting, “E.W. for president” afterwards.

Among the around 40 people attending Tuesday’s event was the Richmond field director for Women Speak Out, Leslie Davis Blackwell, who applauded the Duggar family for campaigning in a state they do not reside in.

“They stand for family values and they stand for life. They stand for conservative principles,” said Blackwell. “I think it’s quite remarkable for them to go out on the road to support Ken Cuccinelli.” Women Speak Out is an organization of women voters who are supporting Cuccinelli’s campaign for governor.

“I like that [Cuccinelli] has a proven record of standing up for women, our health, our safety, our families. I like that he values and respects the dignity of life,” said Blackwell.

The Duggars are scheduled to continue their campaign in Virginia with stops in Fredericksburg and Woodbridge on Wednesday.