RICHMOND, Va. – As Election Day nears, be ready for Republican Ken Cuccinelli, Democrat Terry McAuliffe and Libertarian Robert Sarvis to pop up when you check your Facebook page and Twitter feed. Their gubernatorial campaigns are all engaged on social media platforms like Facebook and Twitter. Experts say these are indispensable tools in political campaigning today. 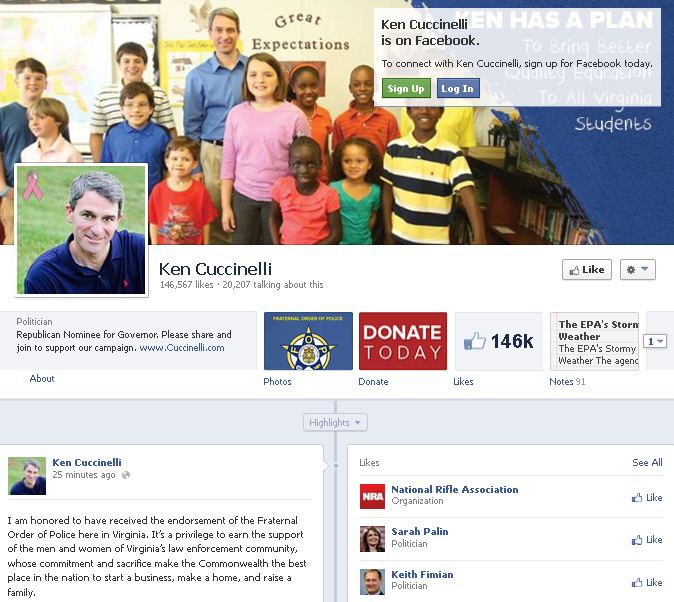 David Saunders, president and chief idea officer of the advertising agency Madison+Main, stresses the importance of a strong online presence. “Social media is about the like and the share,” said Saunders. “It is the culture of personality.”

Saunders believes social media platforms are too popular to ignore during elections. Typically in October, campaign efforts are increased with more advertisements, Facebook posts and tweets promoting the candidates’ messages. Each candidate’s campaign on average makes several Facebook posts a day, with some gaining hundreds of likes and comments.

“Candidates can’t just continue to push direct mail and attack ads through TV down our throats. They really need to engage voters [through social media], because it’s a much more interactive medium,” Saunders said.

Ashley Shoval, an advertising professor at VCU’s School of Mass Communications, believes a platform like Facebook trumps all other networks because it directly connects voters with candidates.

“Politics is something a lot of people are very passionate about. It is highly emotionally charged, so right away there is the opportunity to pass along your opinion and share it with friends and family,” Shoval said.

Cuccinelli currently has a clear lead in the popularity race on Facebook with around 146,500 likes, while McAuliffe has only 48,600 and Sarvis 9,400 likes. On Twitter, Cuccinelli’s lead is smaller with around 16,000 followers over McAuliffe’s 13,500 and Sarvis’ 1,800. But one slight advantage for McAuliffe has been so far that he has tweeted more often than his opponents.

The candidates and their campaigns appear to be using social media as a way to directly communicate with voters rather than as an outlet to promote campaign ads.

“If they can do that, they can be very effective at it,” Saunders said.

Although Sarvis is behind Cuccinelli and McAuliffe in his number of likes and followers, he finds some of his biggest support through social media platforms like Facebook and Twitter.

“As a third party candidate, he’s reliant on social media presence because that’s all he has,” said VCU Brandcenter graduate Gottwald, who prefers getting candidates’ updates from Facebook, because it is a less limited medium in comparison to Twitter, which only allows users 140 characters per tweet.

“With Facebook you get a little bit more nuance and more shading of stories and it’s easier to post links to it,” said Gottwald.

All three candidates have a large presence on social media, but none of them can compete with the current governor. Bob McDonnell has more than 56,000 likes on Facebook and 35,000 followers on Twitter.