RICHMOND, Va. — Only few college students tune in during off-year elections like the Virginia gubernatorial race and cast their vote. In an attempt to get the campus community involved in this fall’s election, the Society of Professional Journalists at VCU staged a debate on Monday night.

Representatives for the Young Democrats, College Republicans and Young Americans for Liberty stood in for gubernatorial candidates Terry McAuliffe, Ken Cuccinelli and Robert Sarvis in the University Student Commons and debated the hot-button election issues in front of a crowd of around 150 students. 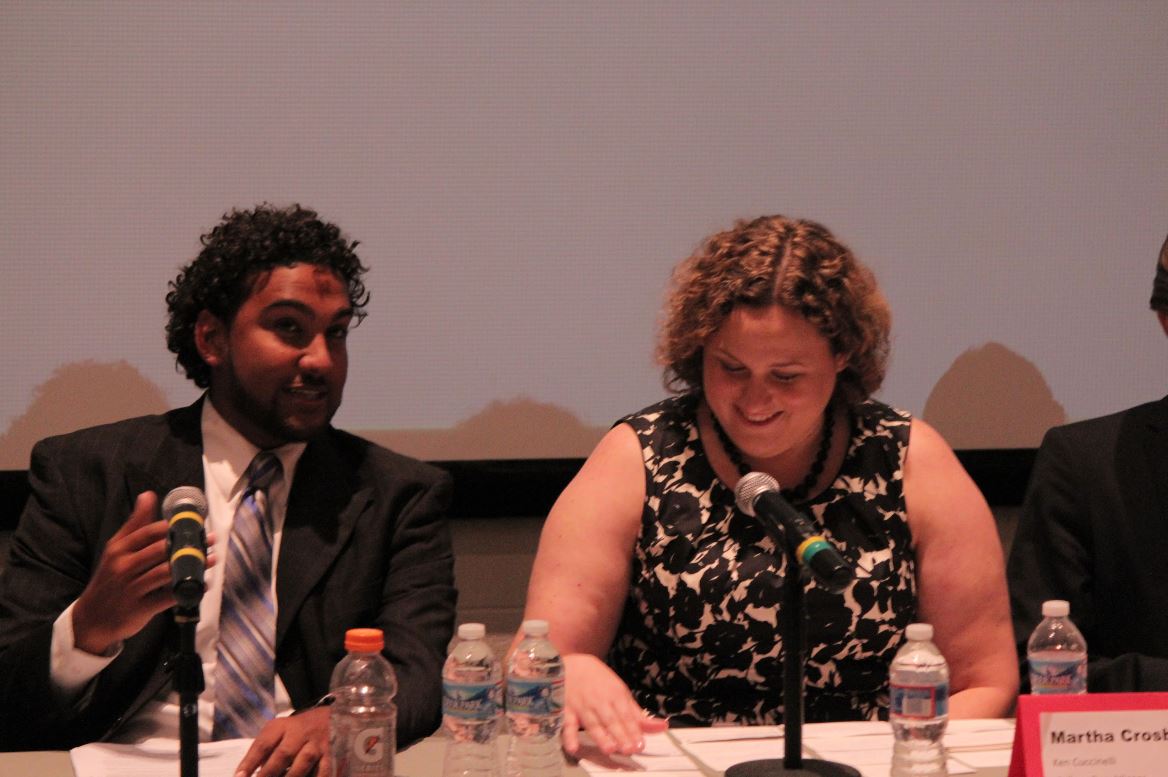 The first half of the debate shed light on issues such as tuition costs, health care, veteran’s affairs, Medicaid, medical marijuana and higher education, while the second part was run in a town hall format with audience questions submitted via Twitter.

And at times — just as between the real candidates — the debate got heated. When each student representative was given the opportunity to ask a question to one of  the opponents, Young Democrats and College Republicans took shots at the Libertarians. Their gubernatorial candidate, Robert Sarvis, has had surprisingly good showings in statewide polls recently.

Matt Rogers of the Young Democrats at VCU asked Tyler Lloyd, who had joined the stage for the Young Americans for Liberty at the last minute, who the Libertarians expect Virginians to vote for in the upcoming election for lieutenant governor.

“Thanks for your question, but no comment,” said Lloyd as his party did not nominate a candidate for the office.

Martha Crosby of the VCU College Republicans then turned to Lloyd again and asked how the Libertarians expect to get their policies implemented if nobody is there to back them. Lloyd responded that it can be achieved by bringing down the government and its current state of affairs as with the current shutdown.

“We don’t have a libertarian government, so you can’t blame the Libertarians for anything that goes on,” Lloyd said.

“You don’t have accountability either,” Rogers snapped back.

The debate then swiftly turned to other hot-button topics like raising the mandatory minimum wage of $7.25.

“We need to raise the minimum wage so people can live and raise a family,” said Rogers of The Young Democrats.

Crosby said that Ken Cuccinelli and Republicans oppose raising the minimum wage, while the Libertarians are against a federally appointed minimum wage altogether.

“Everything is going to cost more when the people that don’t deserve the money get it,” Lloyd said.

Lloyd did not shy away from taking on unpopular viewpoints with the audience, for instance demanding that the government “stop student loans in the college system.”

“Education is overall highly regulated,” said Lloyd. “We’d like to cut down on federal subsidies in the college system, because if you don’t do that you will further incentivize higher and higher tuition rates.”

Crosby, on the other hand, seized the opportunity during the debate to rebut the belief among some students that Ken Cuccinelli is a candidate who doesn’t care about others.

In the end, the gubernatorial debate turned to national topics as the student representatives assigned blame for the current government shutdown in Washington. And as in Washington, the Democrats pointed fingers at the Republicans and the other way around, while the Libertarians blamed both parties.

Only once did the student representatives find a rare common ground when one student asked them whether the Richmond Flying Squirrels baseball team should get a new stadium. All three representatives agreed that it was an issue to be handled by the mayor and not by the future governor.

The debate supported VCU’s efforts of encouraging students to get their voice heard in political elections. Representatives from VCU Votes, a nonpartisan election campaign at VCU, helped to register students to vote after the event.

Watch an interview with Matthew Rogers, president of the Young Democrats at VCU, on why Virginians should elect Terry McAuliffe as governor.

Watch an interview with Martha Crosby of the VCU College Republicans on why Virginians should elect Ken Cuccinelli as governor.

View the discussions from the VCU mock gubernatorial debate on Twitter under the hashtag #spjvagov.

By Jackson McMillan and Jim Swing (Special to WTVR.com)