WASHINGTON (CNN) — Police near the U.S. Capitol opened fire on Thursday on a car being chased by authorities from near the White House, hitting a woman driving the vehicle that also contained a child, an intelligence source told CNN.

The child appeared to be uninjured, according to the source and witnesses. The female driver was pronounced dead. Multiple police sources and publications have identified the woman as Miriam Carey, a 34-year-old dental hygienist. A search warrant was executed  at a residence in Stamford, CT.

The chaotic scene, with gunfire erupting near the heart of the U.S. government, brought a swarm of emergency vehicles and caused Congress and surrounding offices to be temporarily locked down.

A federal law enforcement source told CNN  that the vehicle  first had an encounter with uniformed Secret Service at a White House checkpoint.

Words were exchanged and an officer blocked access. The driver eventually sped away. Close to the U.S. Capitol, the motorist struck a police car, injuring an officer, the source said. Because of "threatening behavior" and the location, use of force was authorized, police opened fire and the driver was hit, according to the law enforcement source. Multiple sources told CNN it is not believed at this point that any shots were fired from the car.

A witness who was on the base of the U.S. Capitol steps said he saw a black sedan, chased by police cruisers, stop at a grove of trees. Police drew guns and tried to get the driver out. The vehicle went into reverse and officers opened fire, Frank Schwing told CNN. "It was pretty chaotic all over," he said of the Thursday afternoon incident.

Capitol Police said an officer injured in the incident was hurt in a crash. House and Senate sessions were immediately suspended.

A Capitol Police bulletin said reports of gunshots required "all occupants in all House office buildings to shelter in place."

"Close, lock and stay away from external doors and windows," the bulletin said.

President Barack Obama was briefed on the situation.

U.S. Capitol Police Chief Kim Dine said there appeared to be no evidence of terrorism. Police say it appears to be an isolated incident involving the lone vehicle.

"This does not appear to be in any way an accident," D.C. Police Chief Cathy Lanier said of the actions.  Officials would not comment further on the suspect and any verbal exchange at the White House. 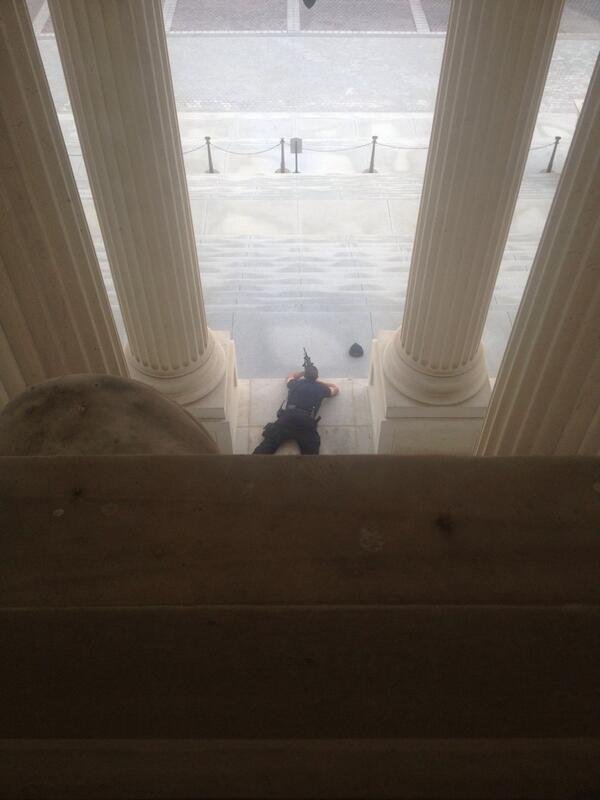