(CNN) — They’re a family of two fathers and one daughter. Until recently, they had lived a quiet life in an upper-class neighborhood in the Mexican city of Monterrey. But they’re now at the center of a national gay rights debate in Mexico.

Their 2-year-old daughter, the couple says, was expelled from a private school in Monterrey for having two fathers.

Alex and Pepe were married in Mexico City, where same-sex marriage is legally sanctioned. They asked CNN not to make their last names public to protect their daughter’s identity.

Alex, a 28-year-old who works in marketing and sales, is the girl’s biological father. Pepe is a 39-year-old broker with a degree from the University of Miami.

The couple says an administrator at The Hills Institute, which also has a daycare facility, told them they would have to hide the fact that they’re a same-sex couple if they wanted the girl to stay at their school.

“They were asking me to give up all of my rights as parent at the school,” Alex told Telediario Monterrey, a local independent TV station. “I would’ve had to not participate in school or social activities. I was to not communicate with anybody nor attend together, as a family, Mother’s Day or Father’s Day celebrations as long as she was attending the school.” 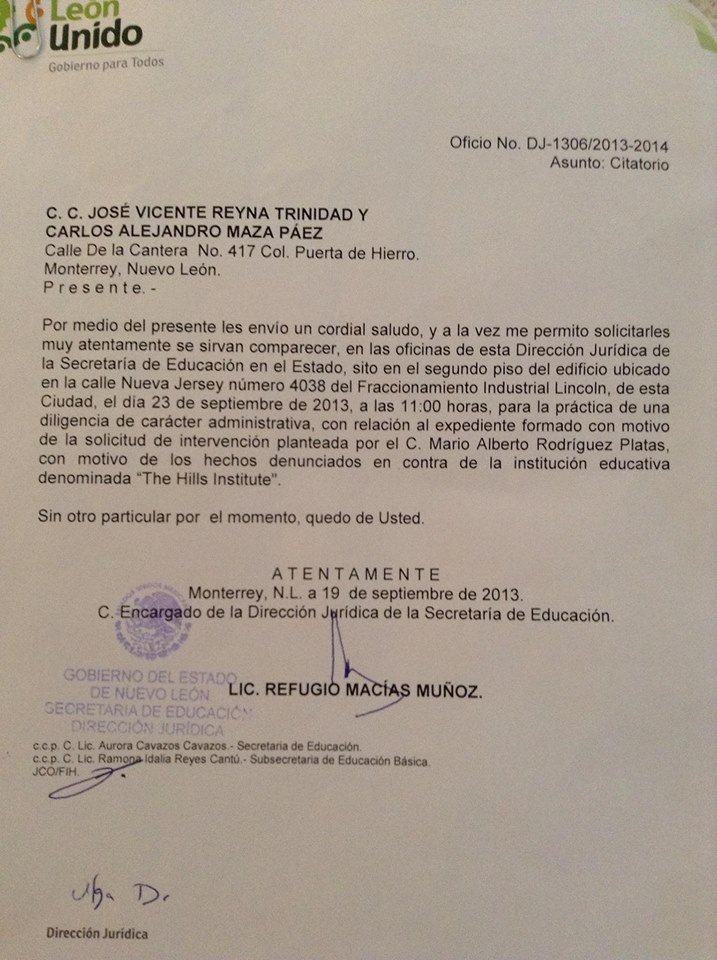 The couple found the conditions unacceptable and the school called the parents to the school a few days later only to give them the news that girl had been officially expelled.

“They saw us through the door’s window and locked the door,” Pepe told Telediario. “The receptionist went to the back of the office. After waiting for 10 minutes, they sent an employee escorted by a security guard to tell us that the girl had been officially expelled.

CNN’S calls and e-mail to officials at The Hills Institute so far have gone unanswered.

On its website, The Hills Institute says their vision is to become “the best bicultural school in Mexico’s educational system.”

According to Alex and Pepe, the couple attended the school’s open house in mid-August. They say they made it clear to school personnel that they were a legally married couple and had legal custody of the child. No issues were raised by the school, the parents said.

The girl was expelled September 13. Last week, Alex and Pepe made the decision to file complaints with two agencies in Mexico.

The couple filed a complaint with the Nuevo Leon state department of public education claiming that regardless of their family’s composition, or whether the school is private or not, it is illegal to deny a child an education in Mexico, based on the Mexican Constitution’s anti-discrimination protections.

They also filed a complaint with the Mexican agency that protects consumers saying the school has yet to refund their money. Alex says a check the school sent bounced.

In a letter to the Nuevo Leon state secretary of education, a spokesman for the LGBT community in Monterrey denounced the girl’s dismissal from the school. Mario Alberto Rodriguez wrote that he believes the incident “violates several legal statutes … in detriment of the rights of the minor.”

Article 1 of the Mexican Constitution states that “discrimination on the basis of ethnic or national origin, gender, age, disability status, social status, health, religion, political persuasion, sexual orientation, civil status or any other that infringes against human dignity or diminishes rights or liberties of the people is hereby prohibited.”

Alex and Pepe say they decided to go public because they feel it’s the only way authorities will do something about their case. “Our daughter has been discriminated against in the most vicious way,” Pepe told CNN.

As for the little girl, her parents say they’re looking for an alternative school while trying to explain to her why she can’t see her friends anymore.