UPDATE: He won! Twenty-three year old Chris Atkins was elected Virginia Tech Homecoming King over the weekend. As promised, he shared the honor with seven-year-old Nathan Orban. Atkins ran for Homecoming King to raise money and awareness for the Leukemia and Lymphoma Society. He said if he won, he would crown Orban, who is recovering from cancer, on the field. 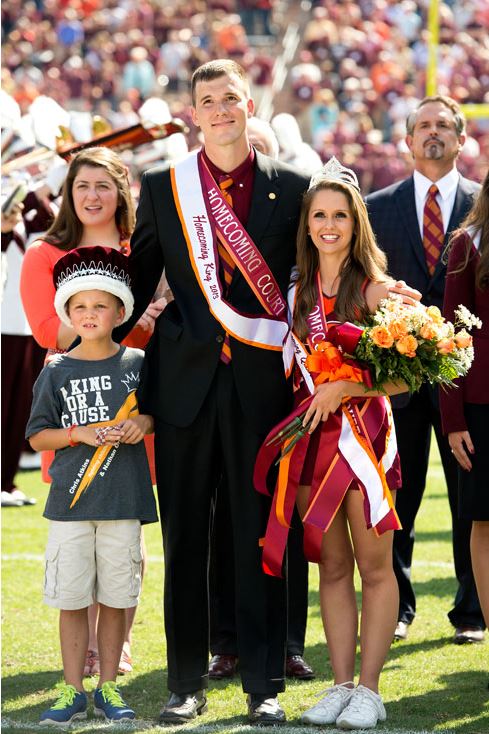 “When I first heard his story and heard he was a Hokie fan, I was so inspired,” the Berryville native said. “When I finally met him [Nathan] in person it was very humbling. He’s already fought the hardest fight you’ll ever fight in your life.”

Atkins, dubbed “King for a Cause,” said he wanted to use his homecoming platform to bring attention to the Leukemia and Lymphoma Society. Atkins and his Farmhouse Fraternity hope to raise $10,000 for the society.

“I’d like to bring money and awareness to Leukemia and Lymphoma Society. I’d like to share Nathan’s story to show the toll cancer can take on the family. You take everything day by day and hour by hour. Cancer is tough, but it’s a lot more than just the disease,” Atkins said. He added that to this point, Orban’s cancer has prevented the child from attending a Virginia Tech football game.

Atkins said Orban will be with him on the football field when the homecoming king is named.  If Atkins wins, he said he planned to immediately hand over the crown to Nathan and crown the child as homecoming king.

“If we can crown Nathan homecoming king, it would be a great experience for him and the Hokie Nation,” Atkins said.