For this plate to become a reality, 450 pre-paid applications are needed, a legislative sponsor and approval from the General Assembly.

At events, via e-mail and in person, LGBT rights supporters have shown their interest for a custom plate that represents the community, James Parrish, Executive Director with Equality Virginia, said.

And while the idea has been discussed for quite some time, this year the enthusiasm has skyrocketed in tandem with the Supreme Court rulings and national momentum.

“We thought it was time for our community to have this way to show their support,” Parrish said.

In Virginia, LGBT people do not currently have workplace protections, and same-sex marriages are not recognized by the state. Shortly after taking office in 2010, Governor Bob McDonnell signed an executive order removing the state workplace protections that former Governor Tim Kaine had signed in 2006 to prohibit discrimination on the basis of sexual orientation.

The new plate is intended as a way for Virginians to show support for equal rights for all, on the road and elsewhere.

“It’s all part of the changing hearts and mind campaign,” Parrish said.

But before “Equality For All” can join the diverse group of more than 200 specialty Virginia license plates that includes pro-life supporters, bowlers, home schoolers, Shriners, the NRA and Parrotheads, there are some hoops to jump through. 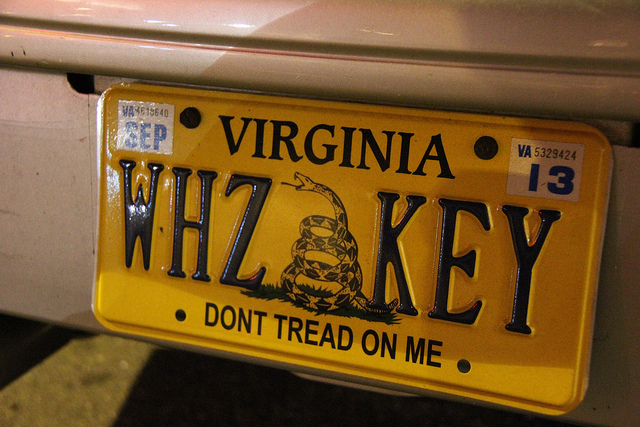 Plates do not go into production until the Department of Motor Vehicles receives prepayment from 450 applicants, a legislative sponsor and approval from the General Assembly. Then the governor signs off on the license plates bill.

Parrish said he received a notification each time someone signs up, and while we were talking, a “ding” came in announcing the latest person to get on board.

So far more than half the signatures have been collected. And while there is no official legislative sponsor named with this effort, Parrish was excited to reveal that several senators and house delegates have expressed unsolicited interest to sponsor the bill.

Signing up is easy, and can be done online or at the many pride events happening this month. There are at least three coming up in Virginia: Charlottesville, Roanoke and Richmond.

Parrish said that after the amount of signatures are obtained, some final tweaks will be made on the plate design. What you see now is a template, and Equality Virginia is seeking input from people on the design.

The plates will cost $25 for non-personalized and $35 for personalized. After 1,000 sales, $15 from every plate will serve as a fundraiser to further Equality Virginia’s efforts.

The process usually takes nine months, and so Parrish said excitedly, there could be one available “this time next year.”

Sunni Brown, Public Relations, DMV, said that the lack of pre-paid applications is a frequent reason that a plate is not approved. DMV doesn’t track if plates are ever turned down in the General Assembly once they’ve completed all the other hurdles.

The next GA session will coincide with the new governor’s term. We asked candidates Terry McAuliffe (D), Attorney General Ken Cuccinelli (R) and Libertarian Rob Sarvis if they would sign off on the plates if procedure was followed.

As of publication, only Sarvis has responded and said yes he would sign off on it, if “this is in accordance with the process in place for all such plates.”