RICHMOND, Va. – When Douglas Wilder calls, gubernatorial candidates are ready to make their case to him and his students. An endorsement by the former Virginia governor can still go a long way for any candidate in Virginia.

Both, Republican Ken Cuccinelli and Democrat Terry McAuliffe, spoke to students in Wilder’s public policy class at VCU on Thursday afternoon, outlining their education plans in attempts to rally young voters behind their campaigns. 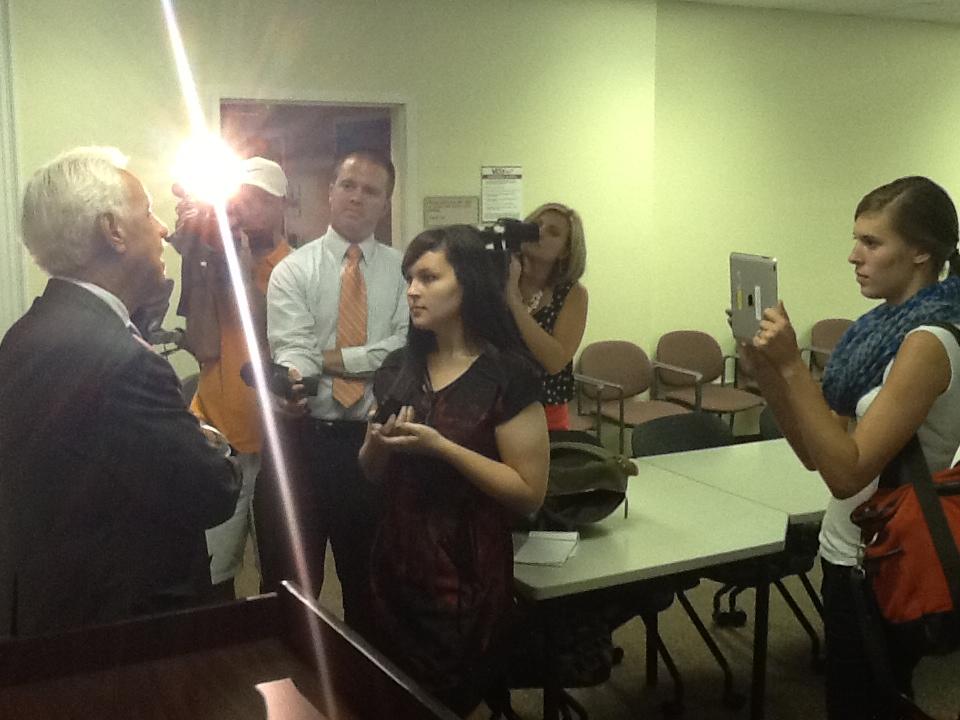 While McAuliffe was still courting student supporters on VCU’s Monroe Park campus, Attorney General Ken Cuccinelli was the first to address Wilder’s class. He introduced his higher education policy, which is built around economic growth, employability, affordability and accountability.

“The driving force behind our higher education plan is the fundamental idea that we want to be able to help as best we can every Virginian go as far educationally as they can and as they desire to,” Cuccinelli said.

He added that since education is critical in the expansion of businesses, universities should increase a student’s job prospects upon graduation and encourage students to study science, technology, engineering, and mathematics, the so called STEM field.

“There are employment opportunities there,” Cuccinelli said. He also said that he would like to maintain financial aid for college students in all majors, because he’s concerned that college education is being priced too high for many middle-class families. He added that he is running for governor so all Virginians can “experience the benefits of higher education,” if they want to pursue it.

Cuccinelli’s opponent, Terry McAuliffe, spoke to Wilder’s students just a little while later and stressed the importance of investing in education to create more economic activity in Virginia. He added that financial aid is “probably the single biggest thing we need to do,” when it comes to keeping higher education affordable. Like Cuccinelli, McAuliffe also touched on the importance of the STEM field, but added, “We want creative thinkers…we need it all. There’s no reason we shouldn’t have it all.”

But it might take some more visits to VCU by both candidates to win Wilder and his students over. Only few had made up their minds about the election after the visits.

Dhara Amin, a criminal justice graduate student at VCU, said she attended the talks with an open mind, because she was still an undecided voter. She said she felt each candidate did a good job appealing to the students, but added: “I think the attorney general failed to mention anything outside of STEM…which was really disappointing, because I am a student of the Wilder School and there’s a lot of soft sciences that we’re a part of.” Amin said she thinks it will be a good race, adding “It’s a good thing I have a few weeks left to make up my mind.”

Carson Lucarelli, an urban planning graduate student at VCU, felt that the candidates held back too much during their visit. “I feel like if the two candidates really want to achieve success among young voters, they need to be upfront about their issues. They seem to be so vocal about them in the media, but when they’re actually confronted face-to-face with their actual contingency that they’re hoping to attract, they seem kind of reluctant to answer those important issues.”

Still, Wilder believes the students are more prepared as a result of the candidates’ visit. “This was a precursor as to what could happen the next time. These students, as you can see, are ready to ask good questions and follow up and follow through with them.”

But Wilder was also not ready to make an endorsement after the candidates’ visits. “Not today, but sometime in the future,” he said.

By Katherine Johnson and Whitney Torres (Special to WTVR.com)