VICKSBURG, Miss. (CNN) — When Dustin Bockman, his younger brother Ryan and their friend Cole Landers put their 17-foot boat into the Mississippi River last weekend about 20 minutes from where they live in Vicksburg, Mississippi, they had no clue that they would soon be caught up in an hours-long battle against a record-setting alligator.

“We put the boat in at 8 o’clock on Saturday night and we got back to the dock with the alligator about 9:30 a.m. Sunday,” the 27-year-old UPS driver told CNN in a telephone interview.

It was a long night.

Bockman had been one of 920 people picked from 27,000 applicants to participate in the state’s 10-day alligator season. His selection and his $100 license gave him the right to catch two alligators — one of any size, and a medium-size one.

Though they’d never hunted alligators before, the men were well equipped: a bright light to illuminate their quarry’s eyes, which typically sit just above the surface of the water, a crossbow attached to a 150-pound fishing line, a deep-sea fishing pole with a snagging hook, a shotgun, Mountain Dew and root beer.

During the first few hours, they saw plenty of alligators, but passed them by. “I wanted to get an alligator 10 feet or better,” he said. 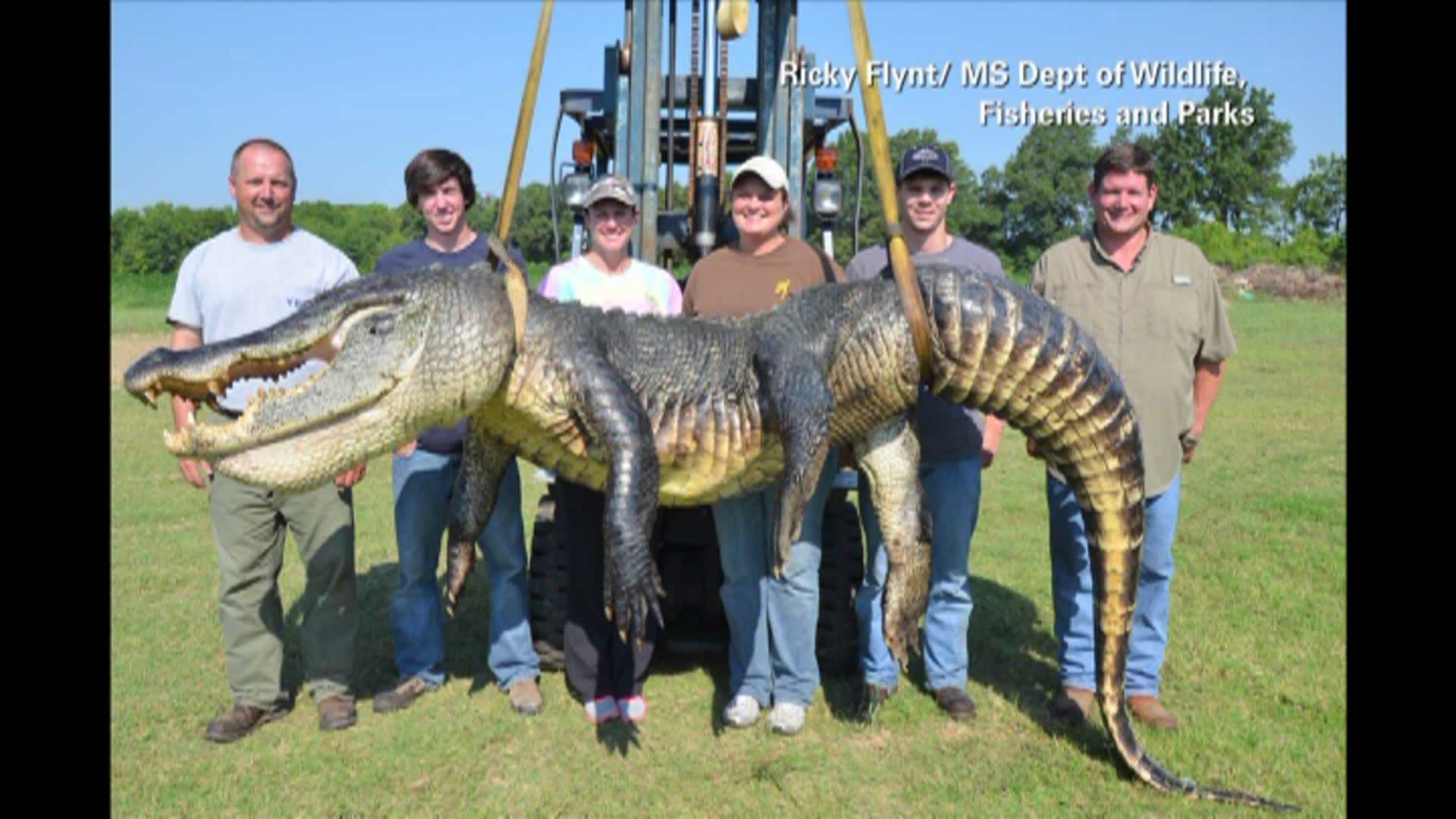 About 1 a.m., they found one that fit the bill. “We didn’t realize how big it was, we just knew it was big,” he said.

Under the rules of the lottery, hunters are not allowed to shoot alligators in open water, he said. “You have to get a line on them.”

That wasn’t easy. Each time they approached the alligator, he submerged, only to pop up a few minutes later dozens of yards away.

Finally, after about two hours, Bockman — an experienced hunter — shot him with the crossbow, striking him in the back.

The line was attached to a homemade buoy — made with a 3-liter water jug containing bells and glow sticks “so when it took off you could hear and see it at nighttime.”

A few minutes later, they got a second line on the gator with the fishing pole, and the animal took off, sinking to the river bottom and sitting — for up to 20 minutes at a time — as the three men tried repeatedly to pull him to the surface. “It was like trying to pull up a tree.”

Finally, another two hours later, success: “My buddy grabbed the boat fishing line and pulled him to the top,” Bockman said. But by then, the fishing line had caught around a tree, so they cut it.

That meant their only connection to the alligator was the buoy line. Another 90 minutes or so later, they used the buoy line to pull the alligator to the surface and tried to cover his head with a snare. “It’s like a noose — you put it around his neck and, when you pull it up, it tightens up.”

But the animal’s head was about two feet long and bigger than the snare could accommodate. “When we pulled it tight, he went to fighting, then broke the bow fishing line. All we had was the snare,” which was not firmly in place.

At that, Bockman stuck the barrel of his Remington 1100 20-gauge shotgun into the water, aimed it at the soft spot on the back of the animal’s head and pulled the trigger.

In an instant, the longtime hunter learned a lesson in physics. “The gun barrel peeled back like a banana peel,” he said. “The gas can’t escape at the end of the barrel (under water). I didn’t know that before, but now I do. It was pretty crazy. I thought they’d gave me the wrong bullets.”

It was still useable, however, and two more shots finished the job, which left them with another challenge. Knee-deep in mud, the three men tried to load their catch into the War Eagle boat, but discovered after much pulling and pushing that they couldn’t, so they called for reinforcements.

“We just pulled him over to a sandbar and waited for daylight so we could call some people to help us load him.” On Sunday morning, two of their friends arrived and helped them pull the alligator into the boat.

It was only then that they realized they had bagged a big one.

But they had forgotten to bring a tape measure, so they were reduced to guessing its size. “We didn’t realize until we took him back to my buddy’s house and took him out of the boat with a tractor and put a tape measure on him that we needed to go get him weighed for a state record,” he said.

Officials estimated its age at 50 to 60 years.

Their catch beat out the state’s previous record winner in the weight category, which had been set just an hour earlier by a hunting party led by Beth Trammell of Madison, Mississippi. That gator’s 723.5 pounds and 13 feet, 5.5 inches had broken the previous weight record of 697.5 pounds.

The current length record is 13 feet 6.5 inches, set by an alligator taken on the Pascagoula River in 2008.

Bockman has stored his prize catch in a deer processor’s walk-in cooler. He plans to keep some of the meat, give away most of it to friends, then get the hide tanned, mount the head and the mushroomed gun barrel on a plaque and display it to his friends.

But he has no illusions that his record will last long. “They could break my record tonight,” he said. “There’s bigger alligators out there.”

Bockman will have to wait, however. He still plans to bag a second alligator this season, but it must be between 4 and 7 feet in length.