RICHMOND, Va. (WTVR) – New plans for a large, new amphitheater near Richmond’s riverfront don’t show a 100-foot-long, pre-Civil War brick wall that was “mistakenly”  taken down – a wall on the shoulder of George Washington’s 225-year-old canal that would apparently interfere with patrons seeing the shows.

“Surprise, surprise,” said Charles Pool, an Oregon Hill resident and self-appointed guardian of the canal system that Washington envisioned to connect Richmond (and the bay) with the Mississippi. 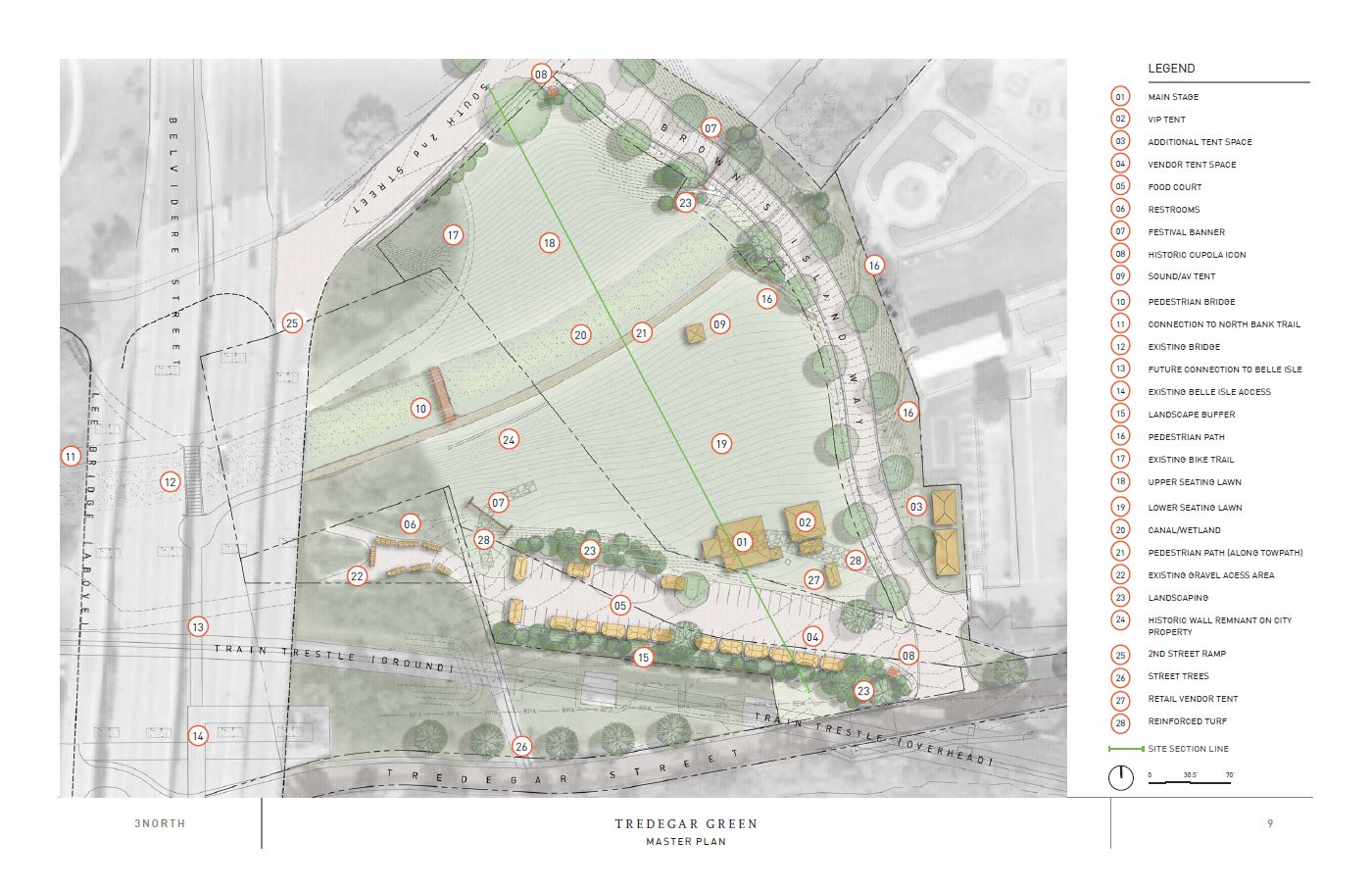 Pool tried to get Richmond police to open a criminal investigation into the wall’s mistaken demolition, since charges would’ve been filed against a citizen who damaged or took part of the historic wall, he said.

It’s no coincidence, Pool added, that the wall was torn down before the Richmond booster group Venture Richmond unveiled its formal plan for an amphitheater that would be used during Richmond’s popular Folk Festival and other events.

“The big surprise,” Pool said with irony, “is now Venture Richmond is including city property in the amphitheater proposal. The city property is where 100 feet of the Tredegar wall was demolished. It doesn’t come as a surprise to us.”

Last October, roughly 100 feet of wall was inexplicably torn just before another section was legally removed to make way for the 2nd Street connector road. For days, no one could explain it. Venture Richmond, the city, the road builders all said it wasn’t them.

Finally, the lawyer for Liesfield Contracting in Rockville told me it was an accident. They were removing part of the wall and another section fell down so the rest was removed for safety. Liesfield has agreed to put the wall back up.

But even that mea culpa doesn’t jive with statements from the city and the road builders.

The plans for the new amphitheater don’t show the wall. In fact, the site lines indicate the old wall would be in the way.

Venture Richmond is saying the Canal would be kept very close to its original size and elevation. The walls were added much later.

“We think they’re going in a positive direction to retain the canal bed the way it was during George Washington’s time when he surveyed it,” said Mary Jane Hogue, executive director of the Historic Richmond Foundation.

But opponents said the dimensions being considered aren’t the originals, but from a meeting some 50 years after the canal’s original construction. And the new outdoor theater plans also diminish the size of the tow path and remove the rails, critics said.

It could be argued that it’s too late anyway. So much of the historic canal, tow path, rails and side walls have already been destroyed, with no notice nor fanfare.

But canal lovers said that part of the canal  heading upriver to Maymont could be saved, restored and re-opened to boat traffic.

“If you look at the plans you’ll see the amphitheater faces directly at the Virginia War Memorial,” he said. “Who in their right mind would put the largest, loudest stage in the city of Richmond aimed at that location of contemplation and quietude?”

I couldn’t get a definitive answer about the wall this afternoon. I did talk with Joe Liesfield, and he’s planning to put that wall back up.

We’ll keep an eye on this latest development in the Richmond Canal Wall Mystery.