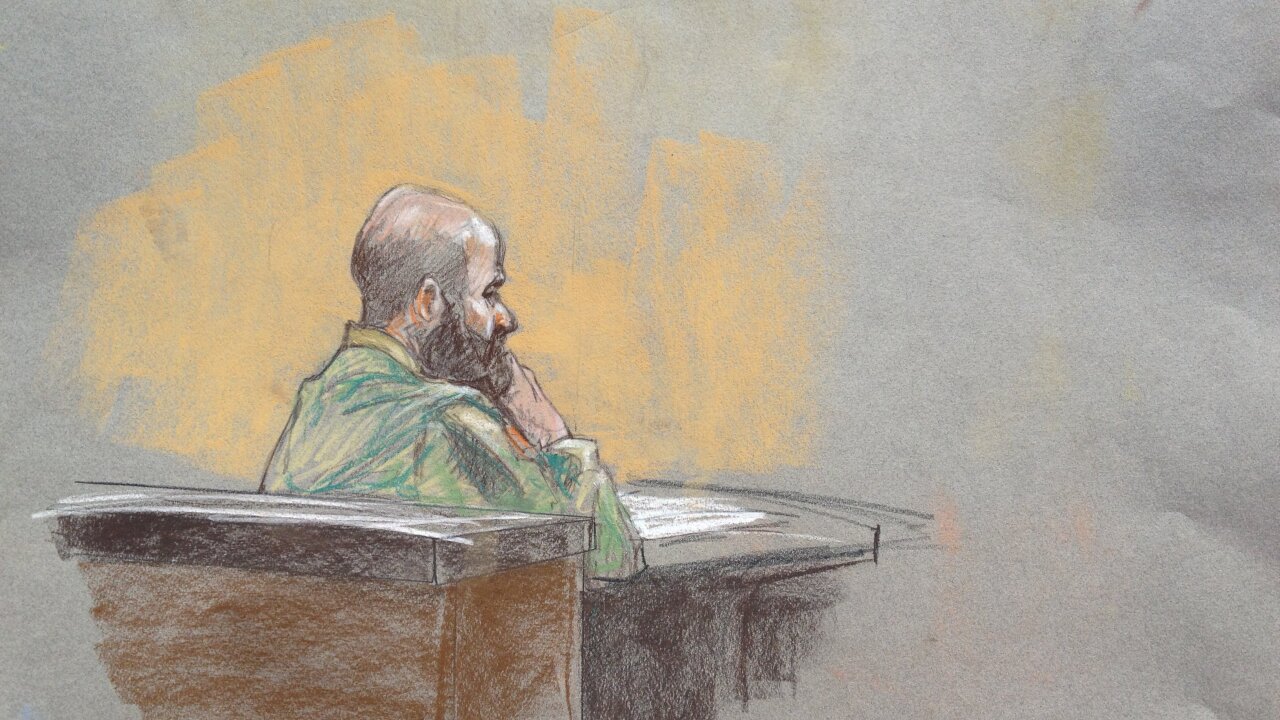 Deliberations were suspended for the night Thursday, August 22, 2013, in the court-martial of the Army psychiatrist charged with massacring soldiers at Fort Hood. The jury will continue weighing the fate Friday morning of Maj. Nidal Hasan, who is charged with 13 counts of murder and 32 counts of attempted murder in the November 5, 2009, shooting rampage.

A military jury has convicted Army Maj. Nidal Hasan of 13 counts of murder and 32 counts of attempted murder in a November 5, 2009, shooting rampage at Fort Hood, Texas, making it possible for the death penalty to be considered as a possible punishment.

Hasan is charged with 13 counts of murder and 32 counts of attempted murder in the November 5, 2009, shooting rampage at a deployment processing center where prosecutors say he targeted soldiers he was set to deploy with to Afghanistan.

A judge handed the case to the jury, a panel of 13 senior officers, on Thursday afternoon after 12 days of testimony in a court-martial where Hasan was acting as his own attorney.

After nearly three hours of deliberations, the panel asked to rehear the testimony of the police officer who shot Hasan, ending the rampage that left 13 people dead and dozens wounded.

Jurors also asked to see a map marked by the police officer, Mark Todd, indicating where he shot Hasan.

The questions appeared to indicate that the jury was evaluating the charge — premeditated attempted murder — against Hasan for firing at Todd, who was not wounded in the attack.

Later, the judge reconvened the court-martial so that the jury could ask two questions about paperwork, possibly indicating it is close to a verdict. The jury went back to its deliberations after it received the answers.

The jury began deliberations after Hasan declined to make a statement during closing arguments.

The prosecution urged the jury to convict, saying the evidence showed that he believed he had a jihad duty to kill as many soldiers as possible. If the jury unanimously convicts Hasan of two or more counts of premeditated murder, he faces a possible death sentence in the penalty phase.

“There is no doubt, as I said in the beginning, the accused is the shooter,” the prosecutor, Col. Steven Henricks, told the jury.

“The only question for you is … is this a premeditated design to kill?”

For more than 90 minutes, the prosecutor took the jury methodically through the evidence in the case, meticulously piecing together how he says Hasan prepared and planned for the attack.

Prosecutors have maintained the American-born Muslim underwent a progressive radicalization that led to the massacre at the sprawling central Texas base.

“He did not want to deploy, and he came to believe he had a jihad duty to kill as many soldiers as possible,” Henricks told the jury.

Hasan picked the day — November 5, 2009 — because it was when the units he was scheduled to deploy with to Afghanistan were scheduled to go through the processing center, he said.

Hasan, who has been acting as his own attorney, rested his case without calling a single witness or taking the stand to testify on his own behalf.

His decision not to offer a defense was an anticlimactic end to the trial in which prosecution witnesses, primarily survivors, painted a horrific picture of what unfolded inside a processing center during the attack.

During closing arguments, prosecutors showed a graphic FBI video of the crime scene hours after the rampage, where bodies, blood and bullets still covered the floor.

As the video was shown to the jury, some of the family members of those killed fought back tears.

One woman laid her head on her husband’s shoulder, tears pouring down her cheeks, while another woman, a wife of a victim, left the courtroom.

For his part, Hasan watched the video, appearing to pay close attention.

Hasan, who has insisted that the jury not be allowed to consider lesser charges against him, said his attack on soldiers at Fort Hood was not an act of “sudden passion.”

There was “adequate provocation” for the attack because the soldiers were going to participate in “an illegal war” in Afghanistan, Hasan told the military judge Wednesday, arguing against the jury being allowed to consider voluntary manslaughter or unpremeditated murder.

Prosecutors argued against the inclusion of lesser charges, saying the attack wasn’t carried out in “the heat of sudden passion,” and Hasan said he agreed.

Much has been made of Hasan’s defense or, as his stand-by attorneys have said, the lack of it. Judge Tara Osborn declined a request by Hasan’s attorneys to drop out of the case. The attorneys argued that Hasan was helping the prosecution put him to death.

There may be something to that claim.

Hasan took credit for the shooting rampage at the outset of the trial, telling the jury during opening statements that the evidence will show “I was the shooter.”

The judge has refused to allow Hasan to argue “defense of others,” a claim that he carried out the shootings to protect the Afghan Taliban and its leaders from U.S. soldiers.

Perhaps as a way around that ruling, Hasan in recent days has leaked documents through his civilian attorney to The New York Times and Fox News that offer a glimpse of his justification for carrying out the attack. Among the documents was a mental health evaluation conducted by a military panel to determine whether Hasan was fit to stand trial.

“I don’t think what I did was wrong because it was for the greater cause of helping my Muslim brothers,” he told the panel, according to pages of the report published by The New York Times.

He also said, according to the documents: “I’m paraplegic and could be in jail for the rest of my life. However, if I died by lethal injection, I would still be a martyr.”

Military prosecutors called 89 witnesses and submitted more than 700 pieces of evidence before resting their case.

The judge excluded much of the evidence that the prosecution contends goes to the heart of the motive for the attack, including e-mail communications between Hasan and Anwar al-Awlaki, the U.S.-born cleric who officials say became a key member of al Qaeda in the Arabian Peninsula. He was killed in a U.S. drone strike in 2011.

Osborn also declined to allow prosecutors to use materials they maintain showed Hasan’s interest in the actions of Army Sgt. Hasan Akbar, the American soldier sentenced to death for killing two soldiers and wounding more than a dozen others at the start of the Iraq war, an attack he said he carried out to stop soldiers from killing Muslims.

Along with the e-mails and the material related to Akbar, Osborn declined to allow the use of Hasan’s academic presentation on suicide bombings, saying “motive is not an element of the crime.”