COLONIAL HEIGHTS, Va. (WTVR) - The Virginia Department of Game and Inland Fisheries (VDGF) is investigating after photos and video of a manatee in the Appomattox River surfaced on social media over the weekend.

VDGF spokesman Lee Walker said if the animal is located, state officials will monitor its movements, but would not try and relocate it.

Cody Beeler, who posted photos and video of the manatee on both Twitter and Instagram, wrote he and his friend spotted two manatees in the lower Appomattox near Colonial Heights on Sunday.

“I think it’s very weird how they just, manatee swam straight up in the river... I’ve never seen something like this before," said Beeler. 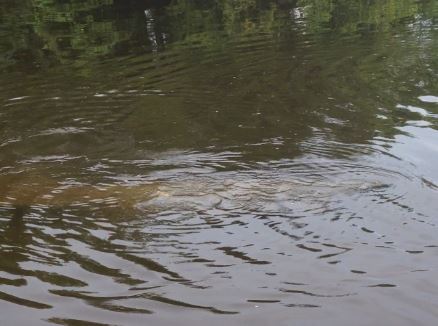 "Florida manatees are found in shallow, slow-moving rivers, bays, estuaries and coastal water ecosystems of the southeastern United States," according to the Save the Manatee Club. "They can live in fresh, brackish or salt water. Manatees prefer waters that are about three to seven feet deep. Along the coast, manatees tend to travel in water that is about 10 - 16 feet deep."

According to the group, Florida manatees are known to travel north.

"Florida manatees are somewhat migratory," the group wrote. "In the summer months, manatees are much more widely distributed. A few manatees may range as far west as Texas and as far north as Virginia, but these sightings are rare."

Manatees are a protected species under federal law. Boats may be the biggest danger manatees face.