These cool underwater pics are NOT Photoshopped

(CNN) — Things which might distract you while having coffee with a friend: food in their teeth, attractive waiters, giant sharks circling your head.

It’s not a hallucination — this remarkable photograph of two men sharing a drink 30 meters below the water is part of an art project exploring the mysterious world of freediving.

Each man, dressed in shirt, jeans and sunglasses, sits in a chair at the bottom of the Caribbean Sea with local reef sharks — harmless to humans — swimming just meters away 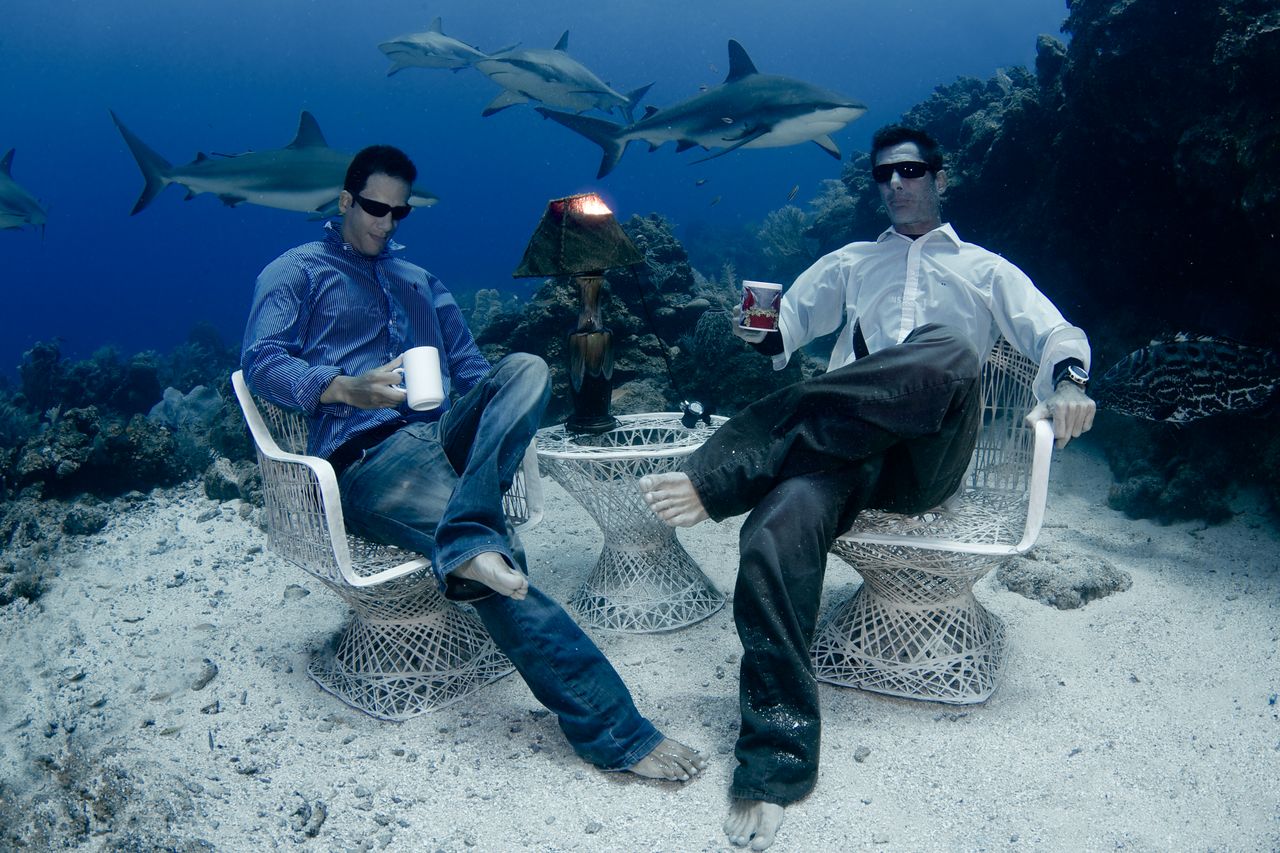 Of course, these aren’t ordinary men, but freedivers: extreme athletes who plumb the depths of the ocean on a single breath of air, sometimes descending more than 100 meters — the equivalent of a 30-story building — without the use of oxygen tanks.

American photographer Lia Barrett had been snapping daredevil divers competing at the Caribbean Cup off the coast of Honduras, when she decided to create a surreal underwater world in which humans go about everyday tasks — such as drinking coffee or riding bikes.

“After the competitors reveled in the new national and world records set at the competition, I took advantage of their breath-holding skills to do photo shoots I had only dreamed of before,” said the 29-year-old, originally from Korea.

“A 30 meter descent for these shoots was no great strain on the abilities of these champions who were going deeper than 90 meters during the competition. They were the ideal underwater models.”

Perhaps unsurprisingly, Barrett is often asked whether the extraordinary images are Photoshopped. She chuckles as she insists they’re 100% authentic.

The picture of two men having coffee by a lamp — featuring Tunisian freediving champion Walid Boudhiaf and Caribbean Cup organizer Esteban Darhanpe — took 50 minutes to create, with the men receiving oxygen from standby assistants around every three minutes.

“The light bulb was a remotely triggered strobe that we duct-taped to the lamp,” explained Barrett. “And it was that particular piece that was the comedy of the whole thing.

“On the way back up, we were holding onto the table with the lamp hanging off it during our decompression stop in the raging current — it was quite a scene.”

The underwater models made an 11-minute pitstop on the way back to the surface, ensuring they didn’t rise too quickly and suffer decompression sickness — which can cause potentially deadly blackouts.

Equipped with scuba gear and specialized cameras, underwater photographer Barrett has “front row seats” to a mysterious sport which for many people remains hidden beneath the waves.

“Before the freedivers start, they’ll lay on their back for around five minutes, then they start packing their lungs full of oxygen — it’s basically swallowing air — and you can see their lungs expanding,” she said.

“Then they kind of just roll over and start swimming down. They have to be very conservative with their energy and at around 20 meters they stop kicking and just free fall — it looks like they’re taking a nap. They disappear into the blackness and all I’ll see are these little bits of movement.”

At 100 meters below the surface of the water, the diver’s heart rate slows down, their blood vessels shrink, and their lungs compress to the size of oranges under the enormous water pressure.

“I love seeing the physical transformation when they come back — you cans see their facial expression straining, their ribcage is more defined, their lips are blue.”

The moment they reach the surface, dramatically ripping off their goggles and sucking in lungfuls of air, offers a strange mixture of exhilaration and relief for the dozens of spectators waiting on deck.

For freedivers who plummet to the ocean floor and back again in the space of four minutes, decompression sickness is one of the biggest risks they face — and one which Barrett has captured first hand.

“To watch a blackout is quite scary,” she said. “But it’s part of the sport, just like crashes in race car driving.”

“It’s as if the life has gone out of them, a bit like they’ve fallen asleep. But there are safety teams with them during the dive who are well trained at giving oxygen to prop them up.”

It’s a feeling 15-time world champion freediver William Trubridge knows well. The 33-year-old grew up freediving from his parents’ house boat in New Zealand and in 2010 became the first person to break the 100 meter mark on a single breath.

He’s blacked-out a number of times and estimates that around one in 10 divers pass-out during competitions, adding that almost all happen just before reaching the surface.

For Trubridge, it’s a risk worth taking: “The joy of being in the water, suspended in silence, at that depth, is incredible,” he told CNN.

“It’s almost impossible to think about the past or future. You’re able to just live in the now — it’s like it takes away your rational mind and you’re just a speck of consciousness, which is a really liberating feeling.”