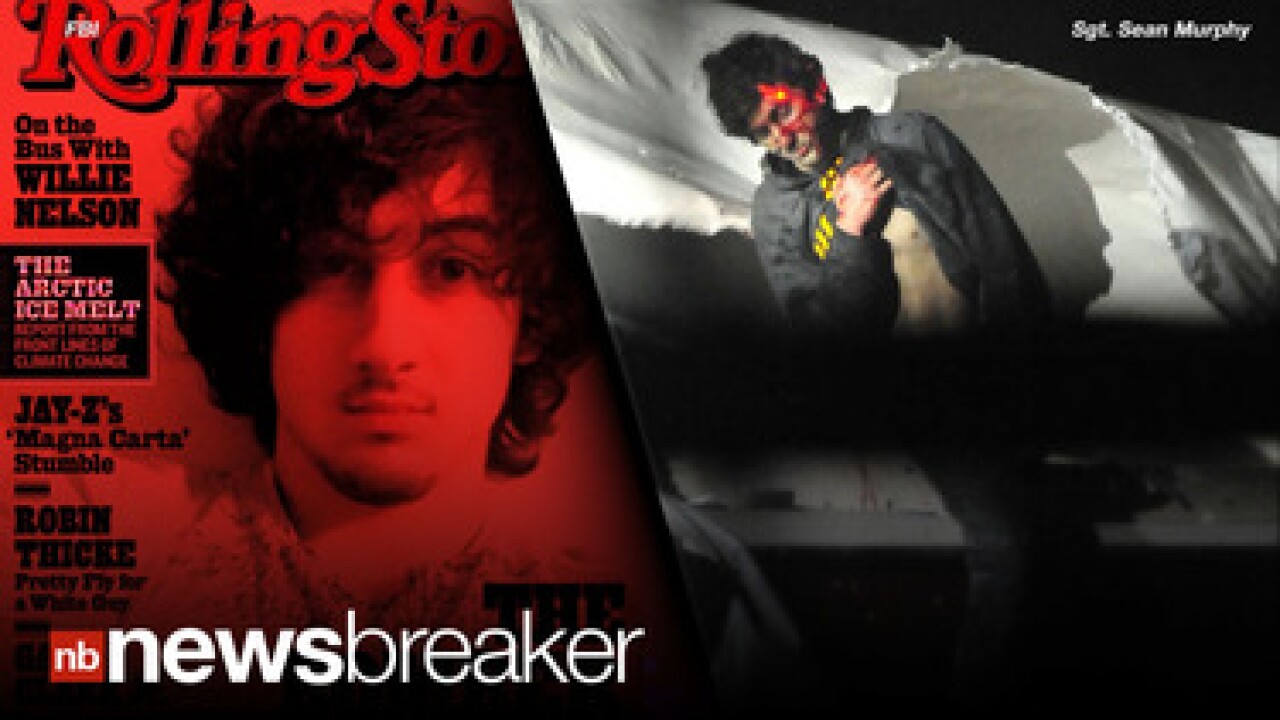 (CNN) — The Massachusetts State Police sergeant who took photographs of Boston Marathon bombing suspect Dzhokhar Tsarnaev that were published by Boston Magazine says he has been relieved of duty pending a review.

Sgt. Sean Murphy told CNN’s Anne Clifford Thursday night that he is on leave and has a hearing next week. Earlier Thursday, a police spokesman said the agency had not authorized the release of photos Murphy took.

In contrast to the tousle-haired, placid-looking 19-year-old on the front of the magazine, the new pictures show Tsarnaev emerging from the boat where he was cornered — his face smeared with blood, his skin ashen in the laser glow from snipers’ gun sights.

In one, he pulls up his shirt, apparently showing he has no weapon underneath; in another, he slumps across the deck of the trailered boat, his bloodied arm hanging down.

The pictures were taken by Massachusetts State Police Sgt. Sean Murphy and published online by Boston Magazine on Thursday afternoon.

In a statement accompanying the photos, Murphy called the Rolling Stone cover “an insult” and “hurtful” to survivors of the April 15 bombings.

“This guy is evil,” Murphy said. “This is the real Boston bomber. Not someone fluffed and buffed for the cover of Rolling Stone magazine.”

John Wolfson, Boston Magazine’s editor in chief, said the magazine has hundreds of similar photos and will publish more in its September issue. He said Murphy was “conflicted on some level” about releasing the photos, but “genuinely worried” about how the Rolling Stone cover will affect the victims’ families.

“I think he was also worried that certain impressionable people might be lured to replicate that by the kind of glamorous-looking photo that is on the Rolling Stone cover,” Wolfson told CNN’s “The Situation Room.”

A Massachusetts State Police spokesman said that the agency had not authorized the photos’ release.

“Today’s dissemination to Boston Magazine of photographs of Boston Marathon bombing suspect Dzhokar Tsarnaev and police activity related to his capture was not authorized by the Massachusetts State Police,” spokesman David Procopio said in a statement issued Thursday night. “The department will not release the photographs to media outlets. The State Police will have no further comment on this matter tonight.”

Tsarnaev is awaiting trial on federal charges in the Boston Marathon bombings, which killed three people and wounded more than 260 on April 15. In addition, a Massachusetts Institute of Technology police officer was shot to death during the dramatic pursuit of Tsarnaev and his brother, Tamerlan, who was killed during a gun battle with police.

Tsarnaev has pleaded not guilty.

Rolling Stone has defended its decision to profile Tsarnaev, whom the same cover called a “monster.” The magazine said the story “falls within the traditions of journalism and Rolling Stone’s long-standing commitment to serious and thoughtful coverage of the most important political and cultural issues of our day.”

But the cover photo has sparked fury on social media and prompted several retail chains to pull the issue from their racks.

Still, some people seemed eager to sell it.

By Thursday, the eBay auction website listed dozens of copies of the controversial edition of Rolling Stone for sale.