The 24-year-old tussled with a shark over the weekend and has since become the most famous man from Nantucket outside a limerick.

"I've been a fisherman my whole life," Sudal said. "It's almost like a drug -- I got used to catching bigger and bigger fish."

On Sunday, Sudal and his cousins were catching bluefish and noticed one had lost half its body.

"I get back half a bluefish. It's got the stereotypical shark bite out of it," he said.

So he threw it back in the water, hoping to lure the predator back. Within a minute, the shark came back to finish its meal.

That's when Sudal jumped into the water to grab a wrestling partner.

"That particular shark took about 45 minutes to get in," he said. "It was probably 7 feet long and 200 pounds."

When Sudal finally got the shark onto the beach, he kept it for about a minute and posed for some photos before sending it back into the ocean.

"I always let them go. I'm not trying to hurt the sharks," he said.

Sudal estimates he's caught more than 100 sharks in the past eight months.

But most of those were in Florida, where Sudal would catch and release as many as five sharks a day. Occasionally, he might see his name in a local newspaper there.

But when you move to Nantucket and start wrestling sharks on the beach, people take notice.

"I got that really cool picture of it. My boss said you should send that to the newspaper here," he said.

Since then, he's received about 100 calls and messages from women he's never met.

But Sudal has also received a wave of criticism over his captures, including concerns about injuries to the shark.

Sudal said he has a degree in environmental science and supports conservation efforts.

"I just played around with this guy," he said. "I love the feeling -- it's like a connection with the animal."

He said he'll continue with his favorite hobby.

And if a real-life Sharknado ever struck, Sudal will be ready. 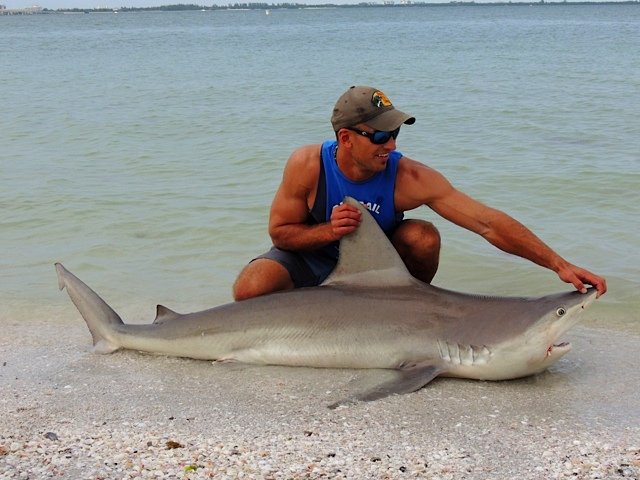