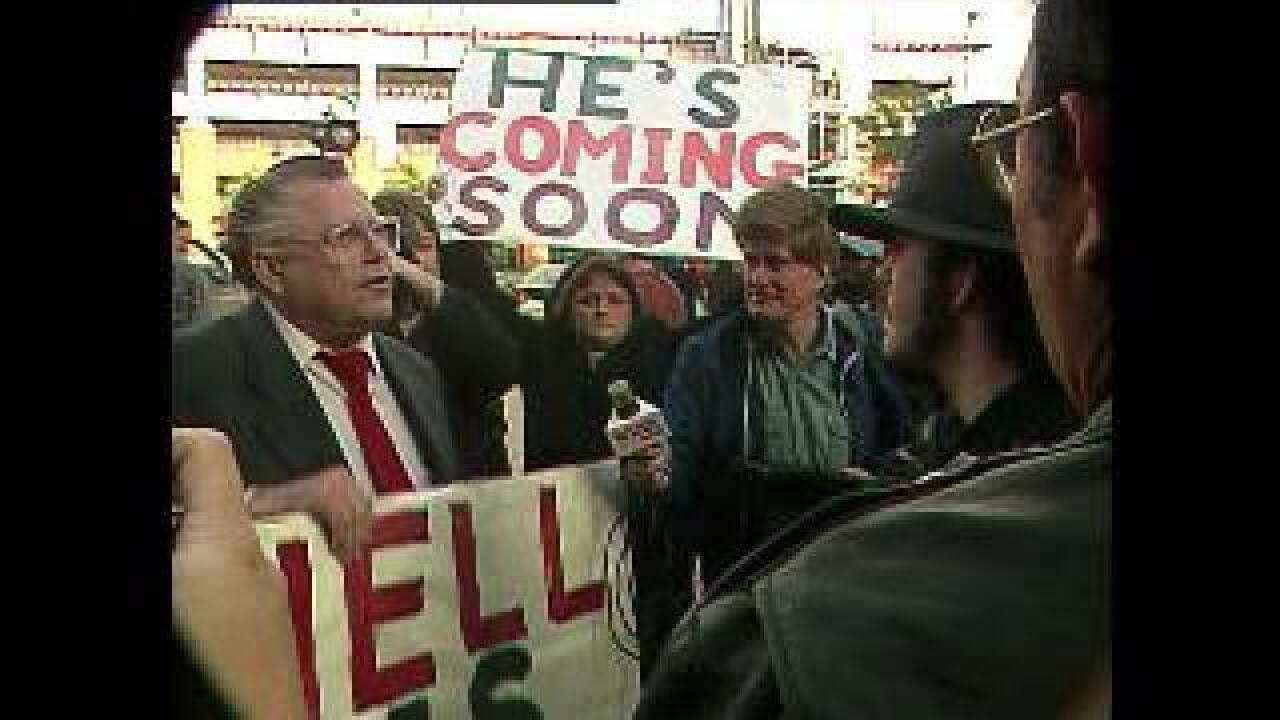 On May 10, 1997, Marilyn Manson’s presence was considerably more controversial than it was tonight.

Then the city manager had initially cancelled the show at the Coliseum, only to back down in the face of a threatened lawsuit from the ACLU. The offered the band money to stay away, but the offer was declined. Mayor Larry E. Chavis told Richmond Times-Dispatch reporters Gordon Hickey and Melissa Ruggieri that no amount was ever discussed.

Tonight, even with a band's whose shtick includes abusing an American flag and ripping apart a Bible, passersby  barely even acknowledged the crowd waiting in black eye shadow, ripped tights and multiple piercings.

Tonight's event apparently went off without a hitch, and nary a protest was spotted. Even when Manson returned to Richmond in November 1998, protesters still lined the street outside the Landmark Theater.

Maybe it’s  worth noting tonight's venue the national holds about 1500 fans, a mere fraction of the 13,000 the Coliseum,where the band played in 1997, can hold.

Reporter Mark Holmberg covered the circus that preceded the concert that night, and he remembers the controversy (his story is below)

“How times have changed,” he said. Of course, Richmond had – and has – GWAR, perhaps the premiere shock rockers. “I think Marilyn Manson upped the ante with a perceived sexual ambiguity,” said Holmberg.

Fast forward 16 years, and Marilyn Manson is not only rather old, he’s rather tame. The controversy is almost comical in retrospect. Gay marriage is all but a done deal. First Amendment free speech rights are widely respected.

The roles have reversed, somewhat.

The advent of cable television and the Internet has widened our vision considerably. What was shocking a generation ago would hardly make a ripple on YouTube today.

We have become a culture that often celebrates the outrageous. Conservative religious values are often the ones being mocked and treated as extreme and unacceptable.

When the Richmond Coliseum rolled out the unwelcome mat for the controversial shock rocker, Marilyn Manson , it was tough to tell who was the hippest -- Manson's black-lipped and hosiery-impaired fans or the Christians who trolled for converts like circus barkers.

"Free tickets!" shouted Pastor Hank Parker from a Coliseum entrance as concertgoers herded toward the turnstiles.

He held up a tract about eternity, shilling for Jesus. "Talk about a high!"

"You can smoke it!" shouted 18-year-old Dan Crandle, a Virginia Beach pizza deliveryman who wore heavy black mascara and a mischievous grin. He came with his Manson pal, Matt Dailey, who wore a nun's dress, black lipstick and combat boots.

"My mom got the outfit for me," he said of his ensemble. His white collar bore the scribble of Marilyn Manson himself. "I followed his bus to the hotel" last fall in Virginia Beach, Dailey explained of the coveted autograph from the Bible-ripping singer.

It had to be one of the starkest culture clashes in Coliseum history, played to the battling decibels of two of the area's radio stations, WRXL-FM and WBZU-FM. Both were doing loud remote broadcasts from the Seventh Street entrance to the Coliseum as more than a few concertgoers and Christians engaged in discussions about faith and free speech.

"Jesus sucks!" shouted a young concertgoer walking past Jackson. "I am Satan!"

"There's a spiritual battle going on," said one Christian holding a John 3:16 sign and standing apart from the throngs. "This isn't between us."

Many of the Manson fans, male and female, wore ripped and runned black stockings -- a few with bones painted on them -- assorted body piercings, punkish hair and blackened eye sockets. There were a few pentagrams and upsidedown crosses painted on foreheads in honor of the band proud to give equal time to Satan.

As for the hundred-plus Jesus fans, some wore suits or robes, others came in biker garb or beatnik clothes.

But many in both camps wore the national uniform -- jeans and Ts -- and would've been tough to tell apart except the Mansonites held tickets and the Christians carried tracts.

Many, like Cathy Baldwin, handed out free cans of Surge soda. "God loves you," she said simply.

"If you don't repent, you will die in a lake of fire!" shouted Dr. Paul Richardson with the Christ Worship Center. He held a "Hell is Real" sign overhead and wore a pcoat and tie.

"Why don't you take your own advice and go home," said 13-year-old Rebecca Spence, one of the few in the crowd wearing pastel-colored lipstick.

"Come to Christ!" Richardson roared, impervious to catcalls around him.

"What does it take to meet the Devil?" one concertgoer asked Richardson. "He's more interesting than God."

"I came for the show, not to be preached to," grumbled 22-year-old Chris Higgins of Lynchburg. "If I wanted God, I'd go to him." He said he understands the Christians' motivation, and their right to be there, but didn't like what he described as their arrogance.

"They act like that's the only religion in the world," Higgins said. "And just because I like this music doesn't mean I worship the devil."

Manson fan Baylor Jackson, who came from Greenboro, N.C., for the show, wound up shouting at Richardson. "He's trying to over-yell everybody and not even listen," he said disgustedly after his encounter. "He's talking about the Constitution . . . that was written by a bunch of . . . racist slave-owners."

But for the most part, the Jesus fans and Manson fans wore similar smiles and seemed to enjoy their encounter session, even if it got a little blurry at times.

"Accept Jesus For 5 dolla" proclaimed the sign held by Tom Foresta, who shouted about the evils loosed by Manson. He was with accompanied by his pierced-tongued partner, Matt Mills, who wore a Corpse Grinder T-shirt and carried an "I love Jesus" sign.

The duo said they're part of a Christian punk rock band playing a type of music they call "Christ-core."

Marilyn Manson made the same claim from stage, explaining why listeners shouldn't believe in him and why he hates himself.

That came shortly after he pretended to wipe his rear end with the American flag and after he and the thousands present thoroughly cursed Richmond City Manager Robert C. Bobb for trying to cancel the show.

Manson also berated the Christians who had gathered outside.

"We are no longer oppressed by the facism of Christianity!" he shouted.

Several Richmond undercover vice detectives -- part of a strong police presence at the event -- winced at parts of the show, but they were expecting the antipolice statements that came from Manson.

They had watched a tape of one of Manson's shows in preparation.

Lt. Walter Allmon, a vice squad supervisor, said the show was almost identical, including the flag incident and cursing of city leaders.