By Ben Wedeman and Ben Brumfield

Interim President Adly Mansour will need to get political consensus before they are appointed.

An announcement on the new government will be made within 24 hours, state-run Nile TV reported late Sunday, quoting presidential spokesman Ahmed Almoslemani.

Egyptian protesters took to the streets again Sunday, where, for weeks, arguments have turned to clashes. 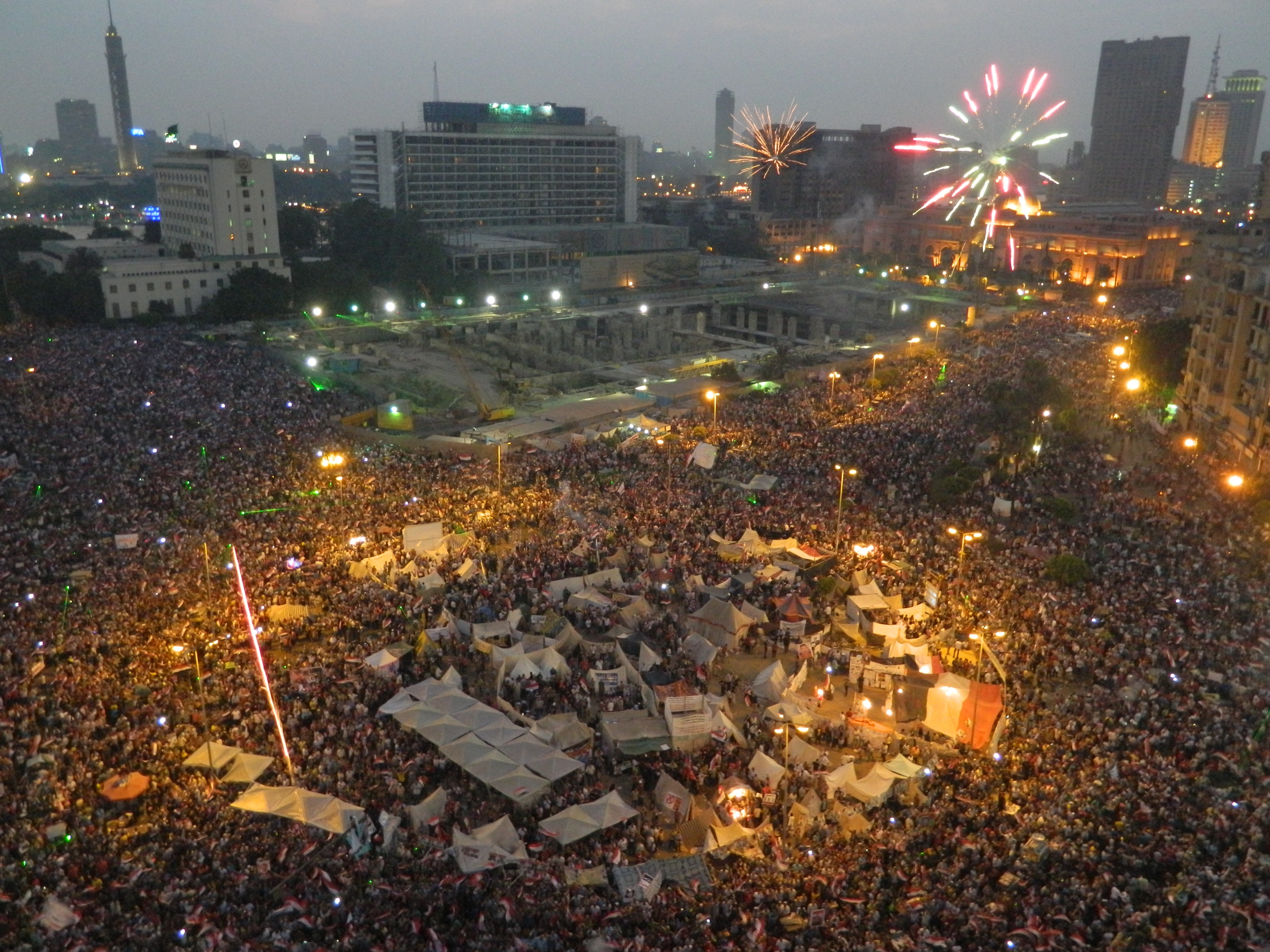 Rocks have flown, knives have flashed and gunfire has cracked through the air, leaving bodies on the ground.

More than 30 people have died and 1,400 have suffered injuries since Wednesday’s coup.

Supporters of the deposed president, Mohamed Morsy, and the Muslim Brotherhood rallied Sunday in Cairo to demand his reinstatement. Some of them took a vow Saturday before a cleric to die for their cause, if need be.

On the other side of the city, opponents of Morsy packed Tahrir Square, shooting off celebratory fireworks.

There were no reports of any clashes as darkness fell on Cairo, but some appeared to be bracing for violence.

Egypt’s military said in a statement that it was stepping up security efforts for the demonstrations.

“We also warn against any provocation or clashes with the peaceful demonstrators,” the statement said. “Anyone who violates these instructions will be dealt with firmly in accordance with the law.”

Meanwhile, the Muslim Brotherhood’s political party vowed that protests would be peaceful and accused authorities of planning to send fake bearded men into Cairo’s Tahrir Square to incite violence.

“This is so they can claim that the supporters of the elected-president and the Islamic groups are attacking the peaceful demonstrators. … We warn those who play with fire that any sectarian incitement at this critical time will not be in the interests of anyone in our beloved Egypt,” the Freedom and Justice Party said in a statement posted on its Facebook page.

Human Rights Watch called for the country’s military and political leaders to do more to stop the bloodshed.

“All sides need to tell their followers to refrain from actions likely to lead to violence and loss of life,” Joe Stork, deputy Middle East and North Africa director at Human Rights Watch, said in a statement. “At the same time, the security forces need to show that they can act professionally and effectively to stop the violence without resorting to unlawful lethal force.”

After Morsy was deposed, authorities arrested him and are holding him at an undisclosed location. His supporters believe he is being held at the Republican Guards complex and have targeted it with their marches.

On Friday, five of them died there, after security opened fire. On Saturday, members of the Muslim Brotherhood filed past the building with the coffins of those killed on their shoulders.

In the lawless desert of the Sinai, where al Qaeda affiliates have long had a foothold, violent attacks erupted after Morsy’s removal.

On Sunday, armed men blew up a pipeline transporting natural gas to Jordan, an ally of Israel and the United States, said a senior Egyptian intelligence officer, who asked not to be named.

Such attacks had ceased when Morsy was president. Before that, armed groups destroyed pipelines every few months, he said.

State-run EgyNews reported Sunday that three police officers in northern Sinai were shot and wounded while on duty when someone in an unmarked car fired shots at them and sped away.

It is unclear whether the attacks were a reaction to events in Cairo.

Morsy’s opponents — who got what they wanted when the military toppled him in a coup Wednesday — will protest “to finalize the great victory” they started on June 30, activist group Tamarod said.

Egyptian police are finishing the work the military started, taking into custody the Brotherhood’s leaders. Officers continue to follow up on hundreds of arrest warrants.

Tamarod was quick to nominate its candidate, Mohamed ElBaradei, for the office of prime minister, but a swearing-in announced for Saturday didn’t happen.

Tamarod spokesman Mahmoud Badr told Egypt’s OTV on Sunday that the presidency had tapped ElBaradei to form the new government but then retracted the offer after objections from the conservative al-Nour party.

ElBaradei is known around the world as the former head of the U.N. atomic watchdog agency, the International Atomic Energy Agency.

He was to appear Sunday in an interview with CNN’s Fareed Zakaria but canceled it along with all other media interviews, his office said.

Mohamed Tawfik, the Egyptian ambassador to the United States, told CNN Sunday that discussions about choosing a prime minister are ongoing.

“This is something for the Egyptians themselves to decide,” Tawfik said when asked if U.S. officials had indicated their support for ElBaradei. “The important thing is for this process to be inclusive and for there to be a general agreement on whoever will be named as prime minister.”

State-run Nile TV reported Sunday night that Tamarod and al-Nour party members were meeting to reach a consensus over who will be the new prime minister.

Wednesday’s coup was the culmination of weeks of efforts by Morsy’s opponents to push him out. They said 22 million people had signed petitions calling for him to step down — more than had voted for him in the 2012 election — and followed up with days of protests that attracted massive crowds.

Morsy’s supporters countered with rallies in favor of his government. At times, bloody clashes ensued. Dozens were killed.

On July 1, the military issued a 48-hour ultimatum demanding that Morsy form a power-sharing government with his opponents. The end of Morsy’s rule came on Wednesday, when his conciliatory gestures failed to placate the military.

Egypt’s experience with democratic governance was short for a country whose history can be measured in millennia. “Either we risk a civil war or … take extra constitutional measures to ensure that we keep the country together,” said ElBaradei, explaining the military’s conundrum. “This is a recall, and it is nothing novel.”

But Morsy failed to fix the nation’s ailing economy or stop spiraling crime, both of which worsened during his tenure. He was seen by many as increasingly autocratic.

Human Rights Watch has said Morsy had perpetuated abusive practices that Mubarak had established, molding them to his own purposes and adding to them. These included the trial of civilians by military courts, allowing police brutality and the suppression of critical voices.

Adly Mansour, head of the country’s Supreme Constitutional Court, was sworn in Thursday as interim president.

The Egyptian army has promised a path to new elections.

The chairman of the Muslim Brotherhood in Jordan warned that the Egyptian military coup might return terrorism and extremism to the region.

“What happened in Egypt will weaken our efforts of trying to convince the people that democracy is the only way to achieve their freedom and the social justice they seek,” Sheikh Hamam Saeed said. “It will also make people lose faith democracy.”

In Washington, a State Department spokeswoman on Friday condemned the violence that followed Morsy’s ouster and called on the military to respect the will of the people, but did not call for Morsy’s reinstatement.

“The voices of all who are protesting peacefully must be heard — including those who welcomed the events of earlier this week and those who supported President Morsy,” spokeswoman Jennifer Psaki said. “The Egyptian people must come together to resolve their differences peacefully, without recourse to violence or the use of force.”

Sen. John McCain, R-Arizona, called Friday for the suspension of U.S. aid to Egypt’s military, which exceeds $1 billion per year.

“We cannot repeat the same mistakes that we made at other times in our history by supporting the removal of freely elected governments,” the ranking member of the Senate Committee on Armed Services told CNN affiliate KNXV. Once the military sets a timetable for elections and a new constitution, “then we should evaluate whether to continue the aid,” he said.

Egypt is the most populous Arab country in the world and has long been a close ally of the United States, which supported it with military aid during Mubarak’s 30-year dictatorship.

It controls the Suez Canal, a crucial sea route used by more than 4% of the world’s oil traffic and 8% of its seaborne trade.

With Jordan, it is one of two Arab countries that have signed peace treaties with Israel.