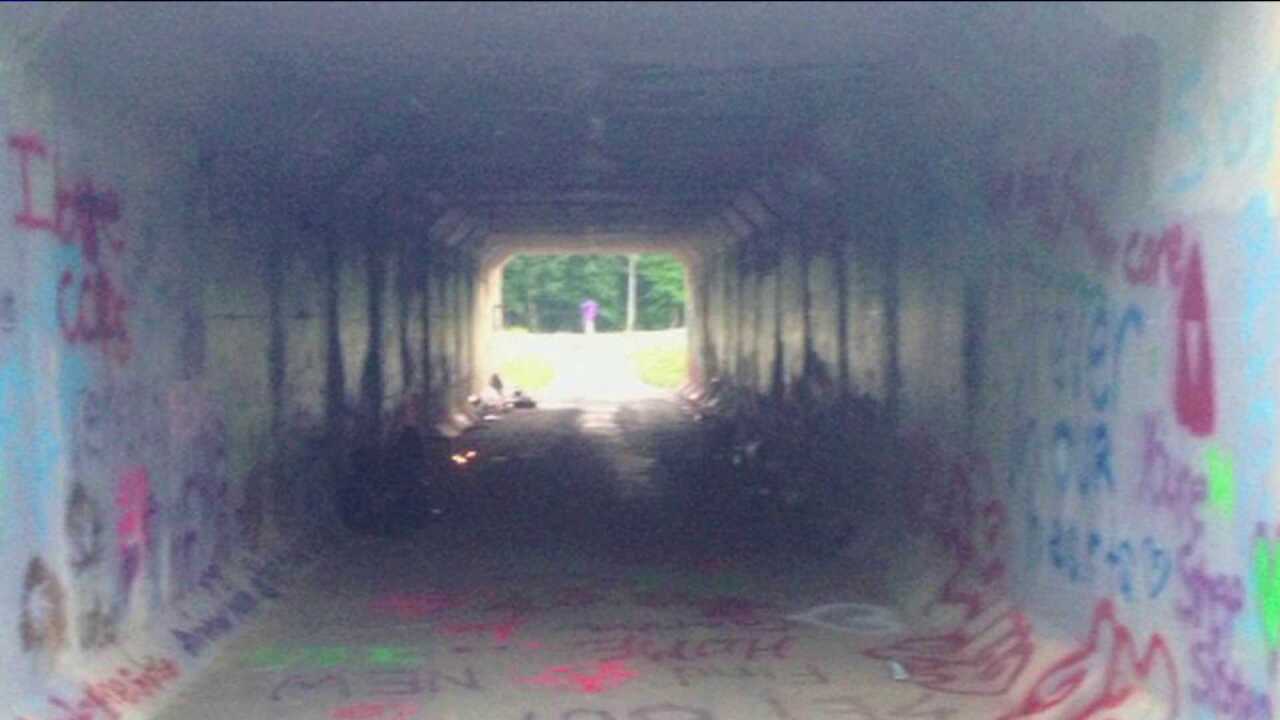 CHESTERFIELD COUNTY, Va. (WTVR) - Two recent Cosby High School graduates, both 18, are due in Chesterfield County Court Tuesday to face felony property destruction charges exactly a month after their friend hung himself in a community tunnel they are accused of defacing.

“Cal’s dead,” 16-year-old Allie said while recalling how she felt when she heard of her friend’s suicide. “I just lost it. I couldn’t stand up.”

“I didn’t believe it,” said Devin, another friend. “I thought it was a rumor.” Even when he learned it was true, he said, it didn’t seem real.

Christine, who said she was Cal’s best friend, said her reaction cut even deeper. “I kind of thought I would’ve noticed that he was that sad,” she said. “But I didn’t. And of course I felt guilt. I kind of blamed myself for a while.”

One thing grief counselors and other mental health experts  worry about with young suicides among close-knit groups is it catching – that another friend might get the wrong idea while mourning.

Devin said the unanswered questions were disorienting. “If it was a car crash, it would be different,” he said. “There’d be someone to blame. We’d know why he was  dead.”

For days, 30 or more of Cal’s friends added spray-painted messages to an impromptu memorial in and around the tunnel.

“Yes,” Devin said. “Just getting out our last words. It was like saying something to him.”

“He was my best friend,” Christine said. “I didn’t want to say good-bye quite yet.”

It was an important release, Allie said. “Actually having a place to come together and not be alone.”

Over the days, the brightly colored memories and messages grew until it became “Cal’s Tunnel.”

The spray painting controversy was discussed during the Hampton Park Homeowner’s Association board meeting in June. Board members listened to concerns from homeowners and parents of distraught teens.

Some of those parents and the teens thought they had till July 29 to paint over the memorial to Cal.

“We had a sign-up list on the wall of people who were going to do it,” Christine explained. “Of course I signed up.”

It was going to be, she said, a symbolic end to the memorial. “We would say our final goodbyes, I guess.”

Michael Vallejo’s son was among those who visited the memorial tunnel every day. He saw how important it was to them, and even for some of the parents.

“So there’s a group of parents, kids, everybody,” Vallejo said. “We were all collectively looking forward to kind of closing out this chapter of the tragedy.”

But last week, the Hampton Park Homeowner’s Association hired painting contractors do to the job professionally. One board member and an association manager contacted by CBS 6 declined to comment. Apparently the board chose to follow the community’s charter.

And police arrested two of Cal’s 18-year-old friends, charging them each with two felonies - property destruction and conspiracy - charges that could keep them out of college. Their first court hearing is July 2.

“It’s ridiculous,” Christine said. “I remember on the first day when the cops first came up. They put flares on the road to show people where to park. So none of us thought we were doing anything wrong.” Police were there regularly, other teens said.

There was a sense, Vallejo said, that the authorities seemed to realize there needed to be an outlet of some kind. He said he wishes the homeowner’s association had realized rules can be stretched to fit very difficult situations.

Devin said he figured there would’ve been an immediate crackdown on the spray painting if Cal had indeed died in a car crash. But death by suicide just seemed to shapeshift the rules.

He wishes he and his friends and their parents had been the ones to put a fresh coat of paint on the tunnel and the bright words to their unusual friend, a young man they said was a different kind of bright light, one that flickered and surprised.

“It would be a different situation” if the teens had covered over their own words, he said. “We wouldn’t be charged. There wouldn’t be hard feelings.”

And, he said, “there would be a sense of accomplishment. The final good-bye.”