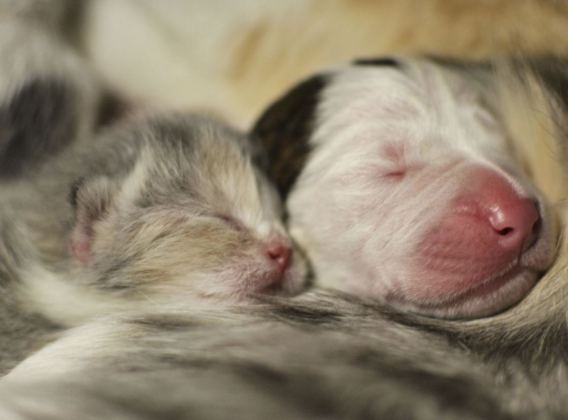 CLEVELAND – It’s not unusual to find an abandoned pet on their doorstep, but the Animal Protective League staff wasn’t quite sure what to do when they discovered a baby pit bull this past week.

“We knew this puppy, who was just one day old, needed some kind of immediate intervention if he was going to survive,” said Ayse Dunlap, director of operations at the Cleveland APL.

Dunlap was one of the team members who tried to devise a plan to help the black-and-white puppy, found just a day after birth.

They decided to try something new: get a cat, who gave birth a couple days before, to see if she’d take the puppy under her wing.

“We just held the puppy up to her,” Dunlap said. “She started sniffing and immediately nuzzling and licking and just accepted the puppy as one of her own immediately. It was remarkable to witness it.”

The cat, Lurlene, is a young mother of four kittens, who spend about eight hours a day with the pit bull puppy, Norland.

Click over to our affiliate WJW to read more about this precious story.