SUSSEX COUNTY, Va. (WTVR) -- Police in Sussex County renewed their search Wednesday morning for a suspect they say is armed and dangerous.

Thirty-three-year-old Dorel Pickett was last seen just off of Route 301 on Tuesday morning.

A storm that rolled through just after 7 p.m. Tuesday forced troopers and deputies to scale back their search for Pickett. Now more than 24 hours after fleeing police, he remains at large.

"What concerns us is public safety.  We want our community to remain vigilant and to call us with any possible sightings,” said  Sussex County Det. Derrick McKenzie.  “We don't know how desperate this guy is."

This all started when an officer pulled over a car for speeding on I-95 southbound in Stony Creek just before 6 a.m.

Jon Burkett reports that the officer suspected the two occupants may be in possession of heavy narcotics. When authorities began to detain one of the car’s occupants, and discovered the narcotics, police said Dorel Pickett took off running and jumped a fence.

Authorities are now hunting for Pickett, who is described as a black male around 6 feet tall and weighing around 240 pounds with a muscular build. He is believed to be wearing a camouflage jacket and blue jeans.

Investigators believe Pickett broke into a shed and stole a camouflage jacket. At first, they thought he had also stolen a shotgun, but that weapon was later located.

Police do not know if Pickett has a gun, so he is considered armed and dangerous. Police advised area residents to stay inside and not open their doors to anyone they do not know.

Police had surrounded about four square miles of woods just off Route 301 in Stony Creek around 4:30 p.m.

Multiple agencies are involved in manhunt, including officers and deputies from Sussex, Greensville, Prince George, along with state police and the DEA.

Police believe Pickett is hiding out in the woods off I-95 and Route 301.  Several officers continued to patrol the area late into the night.

Police kept their perimeter intact through the night, waiting for the suspect to make a move.

Tow truck driver Chester Carter witnessed Pickett taking off on foot.  "You could tell this guy was a pro," said Carter. “You gotta’ flush him out."

Not only did Carter tow the suspect’s vehicle --it was a rental car-- but he also sits on the town council of Stoney Creek and says Pickett’s behavior was bad for a community known for its southern hospitality and trust.

"We are a community of laid-back people. We don't have our guard up like we should," said Carter. 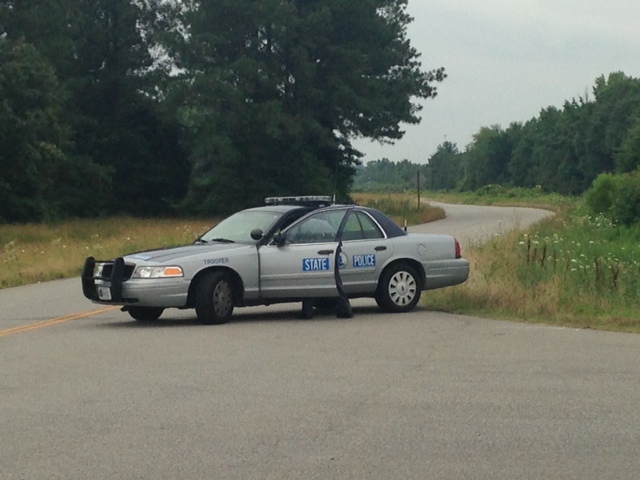