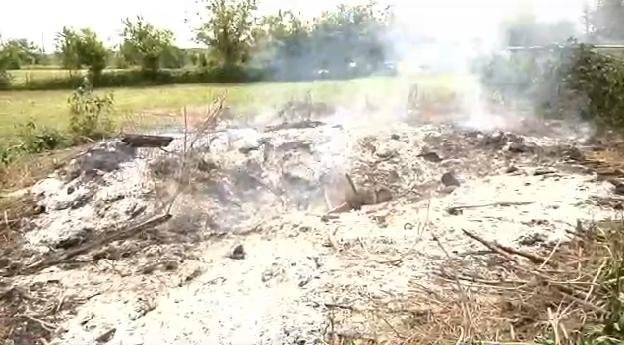 (CNN) — A Texas man died after a swarm of Africanized bees disturbed by his tractor attacked, stinging him more than 1,000 times Saturday.

The bees were living inside an old chicken coop that Larry Goodwin, 62, was pushing over to clear off his Moody, Texas, property, neighbor John Puckett told CNN affiliate KCEN-TV.

“He lifted the whole hive and disturbed them all and they just came swarming out of there and trapped him on his tractor,” Puckett said.

His daughter and neighbors rushed to help, but they said there was nothing they could do to save Goodwin.

“When we got to him, he was purple, he had thousands and thousands of bee stings on his face and arms,” Tanya Goodwin said.

Puckett said his wife and daughter were stung 100 times. “I came pretty close to losing my family,” Puckett said.

Allen Miller, whose company Bees Be Gone removed the hive after the attack, said he’s seen more Africanized bee hives in the past few weeks than he normally sees in a year.

Africanized honey bees, known colloquially as “killer bees,” are believed to have entered Texas in 1990 and have since spread to at least 10 other states, from California to Florida.

Africanized honey bees, which are hybrids of African and European bees, can be highly defensive around their nests and swarm more frequently than other honey bees, according to the U.S. Department of Agriculture. The venom carried by honey bees has similar potency.