At least 51 people, including 20 children, killed in severe ‘mile-wide’ tornado

Click here to watch LIVE coverage from KFOR in Oklahoma.

MOORE, Okla. (WTVR) -- The National Weather Service issued a rare tornado emergency for the Oklahoma City metropolitan area Monday afternoon as at least one twister touched down in the area.

A tornado emergency is enhanced wording in a tornado warning indicating a large tornado is moving into a heavily populated area.

Meteorologist at KFOR in Oklahoma City said the violent and large tornado had a debris ball up to two and a quarter miles wide around 4:15 EST.

“Debris is 500 or 600 feet up in the air – and it’s still going,” said one KFOR staffer in a helicopter about a mile from the tornado.  “It might have momentarily weakened, but is back down on the ground.”

It was on the ground for more than 20 miles. That tornado eventually dissipated, but the damage left behind was likened to a war zone after an atomic explosion. Concrete slabs marked the spots where houses once stood.

The massive twister leveled schools, damaged a hospital, a post office and a bowling alley. Two schools appear to be completely destroyed, according to KFOR. Plaza Tower elementary school was demolished.

Search and rescue were at the elementary school, removing some children. There are reports that kids are trapped inside. At 7:30 p.m. a KFOR reporter said that rescue crews believe more than two dozen children could be dead inside.

KFOR reports that one teacher managed to save three younger children by lying on top of them.

At 9:00 p.m.,fifty-one people were confirmed dead, the medical examiner confirmed. That number included 20 children. The death toll is only expected to climb. The Oklahoma Medical Examiner's Office has been told to expect about 40 additional bodies, according the office's Amy Elliott. The official death toll will not rise until the bodies are processed.

Meteorologists said this is not the first devastating tornado the town has experienced.  In fact, the storm's violent path is almost identical to what happened back on May 3, 1999.

Unlike Sunday night’s deadly storms, Monday’s tornado impacted miles of a densely populated area. There are initial reports that there were 150-200 mph winds.

News of the first confirmed fatalities came from a KFOR meteorologist at the scene when the bodies of a family of four was removed from a home.

KFOR meteorologist Mike Morgan said that Monday's tornado has caused what looks to be three times more extensive damage than the May 3 thru 6 1999 tornado outbreak, which caused $1.5 billion in damage, and 141 deaths.

"People are trapped. You are going to see the devastation for days to come," Betsy Randolph, spokeswoman for Oklahoma Highway Patrol, told CNN after a tornado hit the Oklahoma City area on Monday afternoon. She did not say how many people were trapped. "Send your prayers heavenward because there are people fighting for their lives."

Interstate 35 in Moore, Oklahoma, is closed as a result of debris from the tornado, Oklahoma Department of Transportation spokesman Cole Hackett said. Crews are heading to the north-south highway to start the cleanup process, Hackett said.

The Draper water treatment plant suffered damage and residents were warned not to drink the water.

KFOR and CNN contributed to this report. 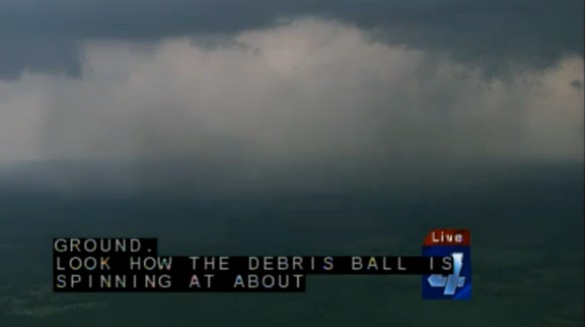