By Shelby Mertens and Sam Isaacs (Special to WTVR.com)

RICHMOND, Va. – Have you tried to decipher the handwriting on a doctor’s note before? While many doctors are notorious for their sloppy handwriting, trying to make sense of it might become a task of the past. More doctors are now using touchscreen tablet computers like the iPad to store patient medical records and fill out drug prescriptions.

iPads and other electronic tablet devices have evolved from being an electronic gadget used for fun and entertainment to a common part of everyone’s hospital experience today.

“The smartphone and tablet technology is still relatively new to healthcare,” said Dr. Colin Banas, chief medical information officer for the VCU Medical Center. “Everyone wants to get in on it, because it’s very attractive in how quickly it comes on, how long the battery lasts, and its ease of use.”

Banas said a tablet is better for retrieving data and offers a quick and efficient way to look up information. He also said tablets are attractive because of their multifunctional abilities

Meredith Brooks, assistant store manager at Capitol Mac, an Apple specialty store on West Main Street, said he has noticed an increase in tablet use in the medical field.

“They are starting to become the norm over laptops and PCs. I think the iPad simplified tablet use. Using an app on a touchscreen device is much easier to pick up than having to learn a program and use a mouse and keyboard to work it,” he said.

According to Banas, popular mobile apps among doctors include Patient Keeper, Epocrates and UpToDate, which allow users to store patient records and look up drug and medical information.

With Patient Keeper, a web and mobile-based retrieval solution, Banas said that he has full access to patient medical records from his smartphone and tablet.

“At VCU, we have a very robust electronic medical record, we use a product called Cerner, and we have it throughout all of our clinics and hospitals,” Banas said.

Banas believes many of the medical apps are very useful for doctors.

“I think the body of medical knowledge is just way too vast to even remotely believe that you can maintain it without some sort of technological aid,” Banas said. 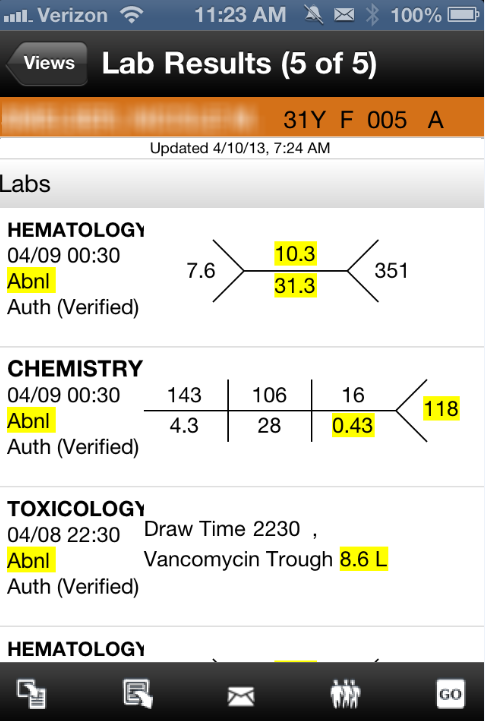 The VCU Medical Center has been using smartphones for about seven years and started using tablets when the first iPad was released three years ago, according to Banas.

“Back then we were way on the cutting edge of mobile technology. The idea that you could walk around at home and still keep tabs on your patients on a PalmPilot was pretty progressive at the time,” Banas said.

Brooks from Capitol Mac added that the affordability of tablets also plays into their increased use in the medical field.

“Tablets can do what the majority of people use laptops and computers for at half the price,” he said.

Doctors at VCU Medical Center are not supplied with tablets, but rather do what Banas calls “BYOD” (bring your own device). However, Banas said doctors have the option to purchase an iPad through the hospital at a reduced rate.

The rise of tablet devices over desktop and laptop computers raises important questions about the security of records in wireless transmissions. In 1996, Congress passed the Health Insurance Portability and Accountability Act (HIPAA) that set the standards for the privacy of patient information in electronic healthcare transactions.

Banas said that even though the tablets are personally owned, patient information is still kept private. “Everything we run is done so in a virtualized session outside of the device so nothing actually gets stored on the device itself,” he said.

Patrick Wettstone, president of Mr. Tech Support at Willow Lawn, also believes that tablets are safe to use for storing medical information. Wettstone said that when the tablet app’s software is in use, the information being sent and received is encrypted and stored on the server. Encryption means that the information is encoded so hackers cannot decipher it.

“Even if someone were to pick up the information due to wireless transmission, they probably wouldn’t be able to use it because it would be encrypted, so it would be useless to them,” said Wettstone, who thinks tablet devices have become safer than the conventional computer.

“Tablets in 2013 are much more secured than regular computers, because tablets don’t get viruses,” Wettstone said.

But Banas admits that having too much technology has its consequences.

“There are downsides to over-reliance to technology. If you think about it, a pen and paper never needs a plug,” Banas said. “A pen and paper always works and it doesn’t require a lot of user training and education.”

Banas said that right now, apps that allow users to write new orders, write brand new notes, and make referrals are still cumbersome, but said the industry is working to improve those apps.

“We just need it to be more functional,” he added. “The best apps are the apps you don’t have to think about.”

Banas said that while the apps that allow doctors to fill out and send drug prescriptions are clunky, he definitely sees doctors being able to send out prescriptions with just a touch of the screen in the future.

“I still think it’s in its infancy,” Banas said. “But obviously with the way the tablet market has exploded, the electronic medical record vendors have to catch up and provide with a really robust solution, because that is what the public is demanding.”