People’s Library recycles its own books

By Jessica Dahlberg and Caitlin Puffenberger (Special to WTVR.com)

RICHMOND, Va. – Richmond’s newest library is quite unconventional, as locals write their own books for it. The People’s Library is a collaborative art project to create 100 handmade books in which Richmonders can capture their personal histories. 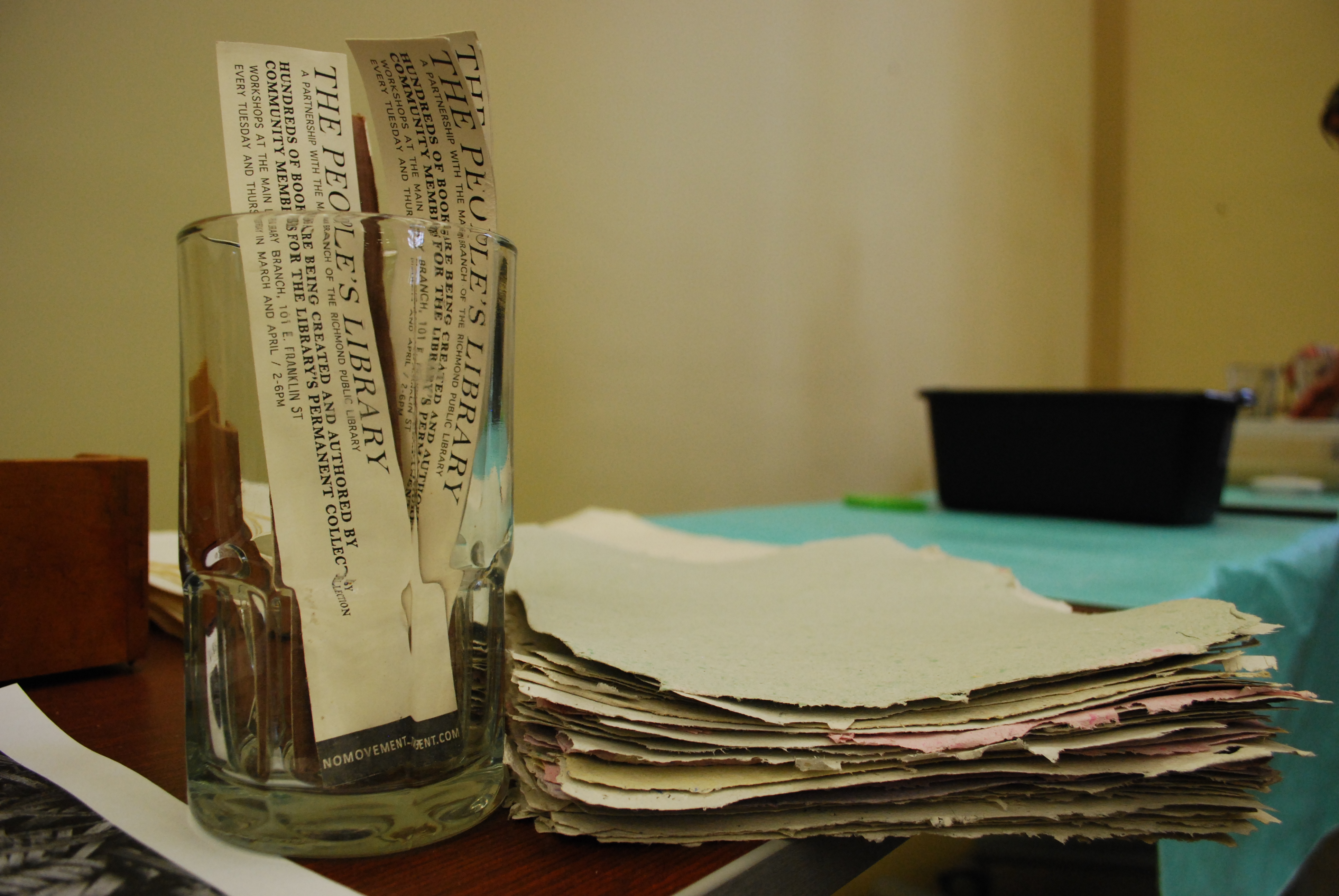 “A lot of times people’s voices aren’t represented in their history,” said Courtney Bowles, one of the project’s collaborators. “But we’re giving you the opportunity to tell your own story and have it exhibited.”

Mark Strandquist, the VCU fine arts student who initiated the project, said he developed the idea after working at the Art Museum of the Americas in Washington.

“I worked with close to 100 groups from all over the city, including folks in prisons and homeless shelters, senior citizen homes, universities, every spectrum of society,” Strandquist said. “I wanted to come up with a way to create a monument that’s built out of all of our stories, regardless of race or class or identity.”

But before Richmonders can write down their stories, they need books and many of them.

Strandquist decided to get the community involved in the whole process. The Richmond Public Library helped collect discarded books that Strandquist and his collaborators recycle into new paper. Since March, they have been holding bi-weekly paper-making workshops at the Main Branch of the library as well as at other places in the community to produce the pages.

“You’ve got this sheet of paper that’s got pieces of text from the pages that have been cut up, with either words or little letters in it,” said Patricia Parks, the community services manager at the Main Branch of the Richmond Public Library on East Franklin Street, who has partnered with Strandquist on the project. “You’ve got history right here on this sheet of paper and it’s beautiful.”

“[Print-making] is often cited as a really democratic medium, because you can make 10 or 1,000 prints,” said Ashley Hawkins, executive director of Studio Two Three. “It’s more affordable, it often occurs in a communal environment like this one.

“So the People’s Library, the idea follows from that, where it’s community, shared narrative and storytelling within these books,” Hawkins added.

Once the People’s Library has created 5,000 pages, the plan is to bind them into books and with the help of Studio Two Three print prompts inside them. Then the books will be cataloged as a part of the Main Branch’s permanent collection; any member of the Richmond Public Library can check one out and write responses to a prompt.

Strandquist said the prompts will try and tap into the idea of sustainable, collective, non-linear history: “What is the one memory you would never want forgotten? Draw a timeline of your life including the most important moments. Leave room on the timeline to come back and write more.”

“You can check them out from the library, so the idea is to give people the time to have a very unique and intimate experience with it,” Strandquist said. He isn’t sure yet what he’ll write, but he plans to spend a few weeks with the book and see what happens.

While the project is primarily a community effort, it will also get some national spotlight. In May, Strandquist and Bowles will be presenting the project at the Open Engagement Conference in Portland, Ore., which focuses on community and collaborative art forms. It will also travel to the MLK Memorial Library in Washington this spring.

The next workshops will be held at the Main Branch of the Richmond Public Library from 2 to 6 p.m. on Tuesday, April 9, and Thursday, April 11.