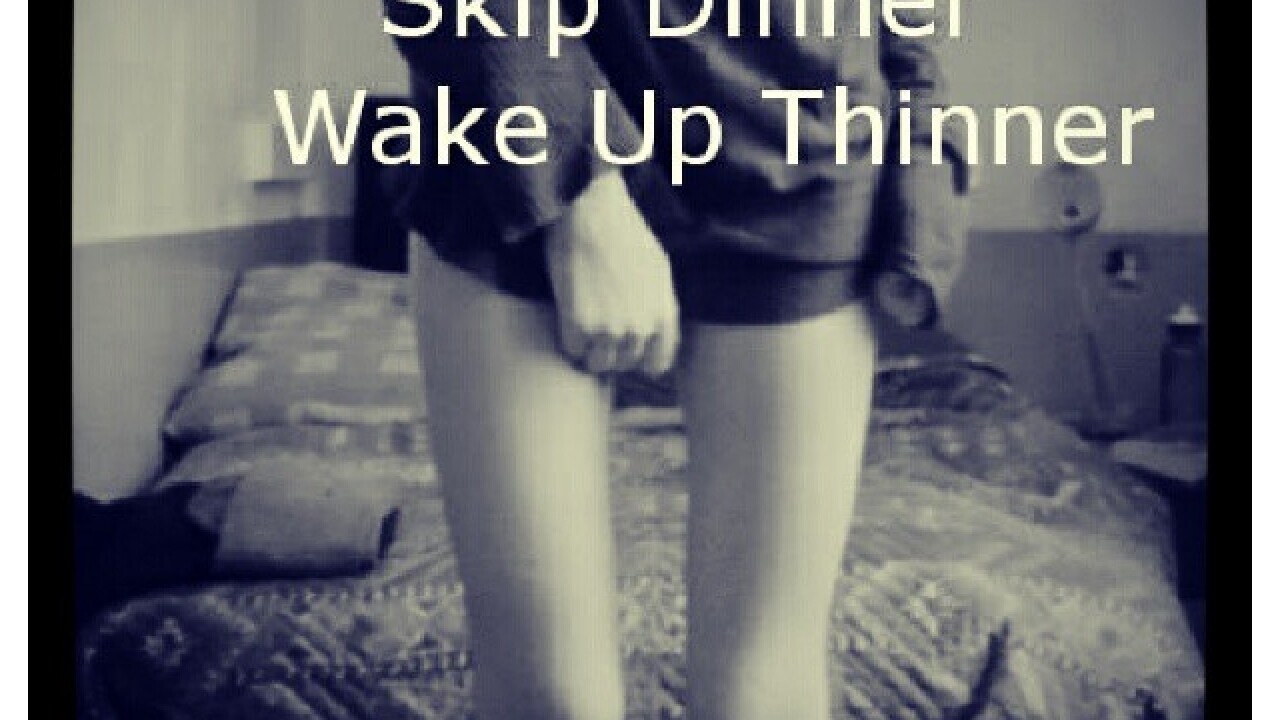 This woman tells other Instagram users that the only way to stay thin is to skip meals.

RICHMOND, Va. – Seeing extremely thin bodies on social media sites like Tumblr and Instagram pushed 20-year-old Amanda Campbell back into her eating disorder. The pictures of emaciated women and the digital encouragement from other users to refrain from eating contributed to her relapse, the VCU student from Waynesboro said.

“You could see every rib. My spine had bruises on it. You could see my hip bones jutted out everywhere,” Campbell said. Even after being hospitalized for her disordered eating, she said she saw “somebody that was still fat.”

While Campbell has been healthier since participating in an eating disorder rehabilitation program, women like her have a high chance to be drawn back into their disease. A study by the Harris Center for Education and Advocacy in Eating Disorders at Massachusetts General Hospital indicated that more than one-third of women who recover from eating disorders relapse within a few years.

The admiration of extreme thinness on social media sites is seen as a trigger for many women for revisiting their unhealthy eating habits. While Tumblr recently updated its guidelines to instruct users not to post content that promotes or glorifies self-harm, monitoring billions of posts is not something any social media site can handle, said Tess Shebaylo, director of support at the Tumblr office in Richmond. 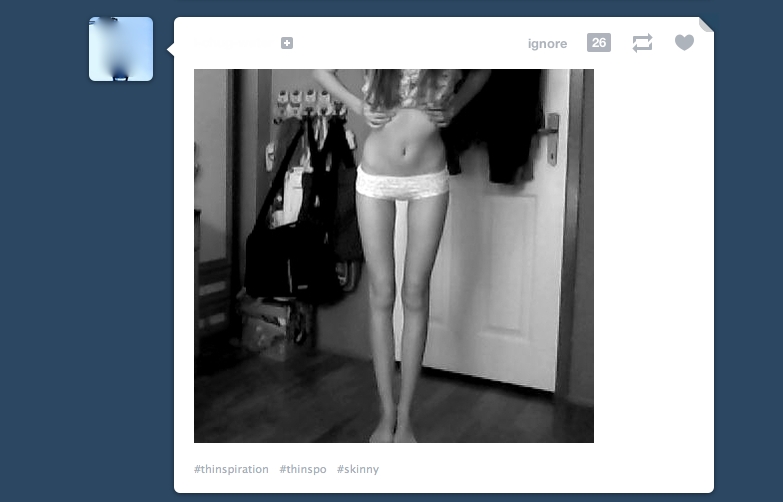 Tumblr reported a milestone this month with more than 100 million blogs, surpassing other blogging platforms such as WordPress. With such astronomical growth since its 2007 debut, policing the content of more than 70 million daily posts is close to impossible.

“In a perfect world, we would never allow people to post XYZ,” Shebaylo said of the harmful content. “But no one reads your post and then allows it to be published; everything is published automatically and we then investigate any claims that are brought to our attention.”

As the modified community guidelines explain, Tumblr aims to be a place that “facilitates awareness, support and recovery,” while asserting that dialogue about behaviors such as eating disorders can be helpful, rather than hurtful to people struggling with or recovering from them.

Even so, Campbell said that working through daily body confidence issues is made challenging by blogs and other social media that host information about severe weight loss through bingeing, purging or fasting.

“It was really, really hard to stop looking at those tags and get myself away from Tumblr or Twitter,” Campbell said. “I have gone online and looked up the ABC diet, which is anorexia boot camp. That’s 200 calories a day, and that’s all you’re allowed to have for 30 days.”

Campbell is among many affected by this eating disorder viral campaign. Close to one half of the young adult patients at Timberline Knolls, an eating disorder treatment facility in Chicago, use social media to support their disorders, said its director Dr. Kimberly Dennis in an interview with the clinical newsletter Eating Disorder Review.

Ann Sahli, a licensed clinical social worker and eating disorder therapist in Central Virginia, said one of the worst things about the “thinspiration” sites is that they give voice to eating disorders in a way that no other media ever has.

“Eating disorders, I’ve found, really thrive in secrecy and in hiding,” Sahli said. “So that’s why it’s so easy to get way out of control online, because you’re not out there with your name. You just find the information and get support for those ideas in your head.

“A lot of eating disorder treatment is giving power to your healthy self … and also taking power away from the eating disorder,” she added. “And to have these sites out there that so flagrantly embody and give voice to eating disorders makes that really tough.”

One blogger, who ran a pro-ana site, said that once she set sight on the pro-eating disorder blogs, her ideas about healthy weight loss rapidly changed into a downward spiral of obsession. While her blog was easily to be found among the pro-ana hashtags until recently, the blogger requested to remain anonymous in the interview for WTVR.com. She said that she is not proud of the content posted on her blog, and she doesn’t want to be identified by it.

“These blogs idolized visible collar bones and ribs, jutting hip bones and stick-thin arms,” the blogger said. “I soon became one of them, posting triggering images and encouraging others to think this way about their bodies and diets.”

The blog she managed was littered with images of emaciated women. Among the posts were lists of diets such as the “skinny girl diet,” which instructed people to eat as few as 200 calories a day. On the blog’s archive, graphics of pronounced rib cages and prominent clavicles were plastered with bold text reading “must not eat” and “nothing tastes as good as skinny feels.”

The blogger said her life will never be the same, since her healthy views towards food and body image changed through her interaction with “thinspiration” blogging. She said what’s worse is that she knows that her blog was encouraging others to indulge in the same unhealthy behaviors as she.

“That is the worst part about my past with this disease, the guilt of knowing that I helped another girl harm herself will always haunt me,” she said. She has since deleted her “thinspiration” blog and created one dedicated to healthy weight loss and eating disorder recovery.

Instagram, the photo platform bought by Facebook one year ago, also has its own “thinspiration” community. Although the company did not respond to requests for comment for this story, the photo-sharing network has taken action by blocking “pro-ana” and “pro-mia” hashtags from search inquiries.

Nonetheless, users have found ways around the blocked hashtags, using new ones like #anorexica, which yielded 412 images in a recent search. One particular post shows a slender figure with a text banner, reading, “1 like = 1 hour of fasting” across the top. The user who posted the image asked Instagram followers to “like this please … I’ll become perfect.”

Because the online epidemic of lifestyle-altering body image blogs is a problem that social media sites have been unable to control, the power to do so ultimately lies with those who are suffering, Campbell said.

“I decided to be healthy, because I finally realized that I was the only one who could control that now,” the VCU student said. “I took that control that I used to fuel my eating disorder and turned it into a positive thing.”