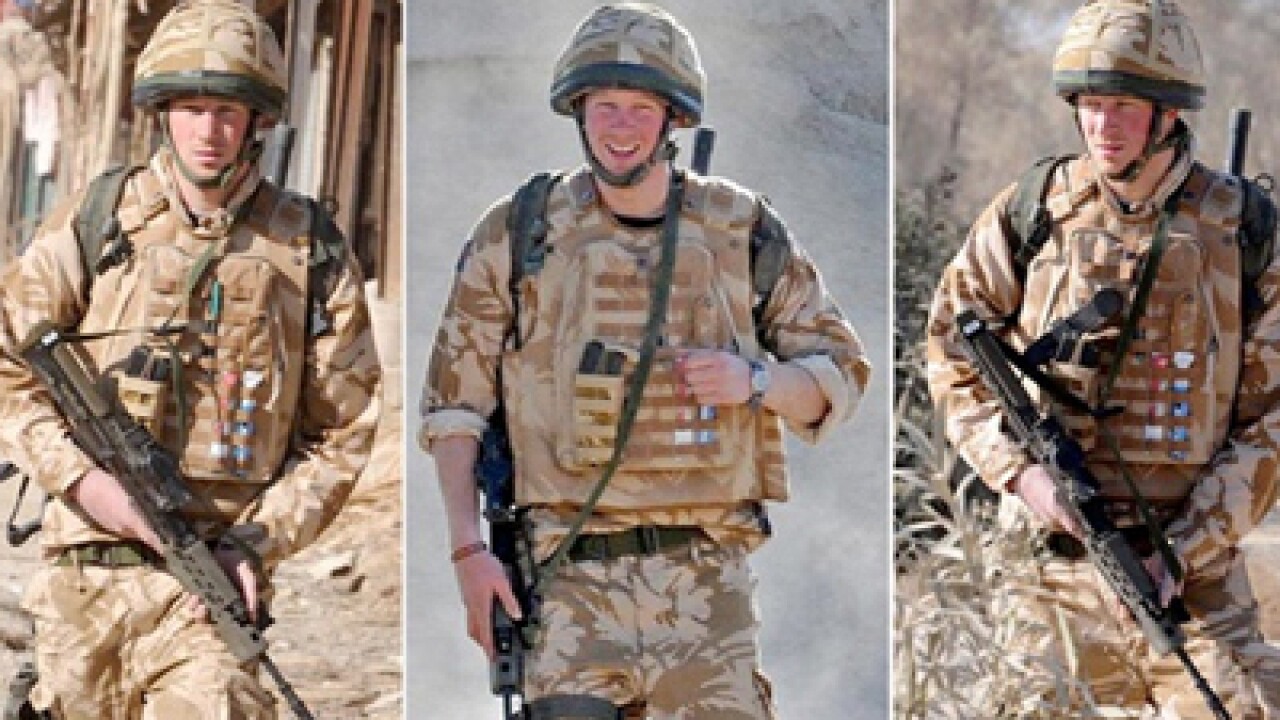 LONDON (CNN) — Before the Battle of Agincourt, King Henry V rallies his troops in Shakespeare’s play of the same name with these words: “Once more into the breach, dear friends, once more… When the blast of war blows in our ears then initiate the action of the tiger. Stiffen the sinews, summon up the blood.”

Henry’s call to action is cited as one of the most motivational speeches in history, and the British Army would no doubt have hoped for similarly inspiring words and good PR from his namesake descendent, Prince Harry, in interviews timed to coincide with his departure from Afghanistan.

But as the prince recalled the “taste of blood” in his mouth as he waited to attack Taliban insurgents from his helicopter gunship, his comments appear to have stirred up as much mockery and controversy as sympathy.

The third-in-line to the British throne, known in the military as Captain Wales, also compared having his finger on the trigger of rockets, missiles and a 30mm cannon to playing video games.

“It’s a joy for me. I am one of those people who loves playing Playstation and XBox and so I am good with my thumbs, I like to think that I am quite useful.”

In Afghanistan, the media-savvy Taliban seized on the remarks and called Harry a “coward” for only speaking when he was out of danger. “This prince comes and compares this war with his games, PlayStation or whatever he calls it,” Zabihullah Mujahid said, according to the Daily Telegraph.

“To describe the war in Afghanistan as a game demeans anyone — especially a prince, who is supposed to be made of better things.”

Even an Afghan parliamentarian admitted Harry’s comments could risk damaging relations. Sharifullah Kamawal told the newspaper: “This makes the withdrawal process much faster, because for now half of the people say the foreign forces must stay for longer, but if they say these kind of things then more people will want them to go home.”

Prince Harry also appeared to acknowledge that he killed insurgents on his four-month tour of duty in Helmand Province. He said it was sometimes justified to “take a life to save a life. That’s what we revolve around, I suppose.”

“Our job out here is to make sure the guys are safe on the ground and if that means shooting someone who is shooting at them, then we will do it.”

The comments set social media alight, with comments both in favour and critical of the prince. The British tabloids also splashed the story about him across their front pages: The Sun’s headline was: “Harry kills Taliban chief: Hero prince in missile strike on commander”

In Britain, the Stop the War Coalition criticized the 28-year-old’s comments as “crass” and questioned how he knew those he’d killed were actually members of the Taliban.

“In recent months many civilians have been killed by air strikes. This arrogant and insensitive attitude to killing Afghans, whoever they are, is hardly likely to win hearts and minds — a supposed aim of the war,” said the group’s convener Lindsey German.

Referring to the occasion when Harry was photographed naked in a Las Vegas hotel room, Freeman added: “During his deployment in 2007-08, Captain Wales spoke of his frustration at not being able to partake in actual action. No more! Now he drops gung-ho aphorisms like Dick Cheney (“Take a life to save a life”) and the young chap who only months before was photographed with his fingers in the most curious of places during a game of “strip billiards” in Las Vegas has since placed those same fingers “on the triggers of deadly rockets, missiles and a 30mm cannon.”

While many analysts in Britain praised Harry for risking his life to support ground troops in Helmand, one politician questioned the tone of his remarks. Opposition defense spokesman Jim Murphy said: “I’m not going to second guess whether he should or shouldn’t have said it.

“He’s obviously a young and brave man. He was candid. Perhaps he may have been more candid than the Palace may have wished.”

In the interviews, Harry said he relished the relative freedom — largely away from the scrutiny of the world’s media — that serving in the military offered him.

“It’s very easy to completely forget about who I am when I am in the army,” he told reporters. But he added that he would prefer to have been serving on the ground than as an airman based at Camp Bastion along with 4,000 other British service personnel. “My choice would have been back out on the ground with my regiment,” he said.

“For me it’s not that normal because I go into the cookhouse and everyone has a good old gawp, and that’s one thing that I dislike about being here. Which is probably another reason why I’d love to be out in the PBs [patrol bases], away from it all.”

In his interviews the prince makes little attempt at all to hide his antipathy towards the media and the tabloids in particular. “Everyone’s guilty for buying the papers…though hopefully no one believes what they read.” But after reading the criticism of his own comments, he may want to reflect on another famous line from Shakespeare’s “Henry V”: “Men of few words are the best men.