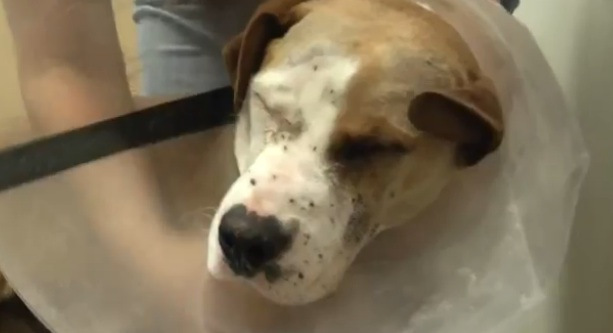 (WGHP) — The ‘dog who wouldn’t die,’ who was found with pellet wounds, stuffed in a bag and left to die earlier this month, was released from a veterinary clinic in Houston on Saturday following surgical procedure that was funded by a Facebook campaign.

“Buck,” a 3-year-old male pup, underwent a $3,000-$5,000 surgery at the North Houston Veterinary Clinic on Thursday to repair wounds on his eyes, according to Scott Engle, a reporter at the Montgomery County Police Reporter.

According to the Buck’s doctor, he still shows “some signs of pain,” but the pain has been reduced. His eyes are healing but “still have a long way to go.”

“Buck had two entry wounds in his left eye near the cornea and one in the right eye with part of the iris sticking out. Doctor Rainbow then went into the front part of the eye to clean out all of the blood that accumulated from the injury.” – Scott Engle – Montgomery County Police Reporter

The dog was found earlier this month inside a bag tied to a fence in Conroe, Texas.

Tami Augustyn, the woman who found the dog and first took him to the hospital, started aFacebook page and has since received “more than enough money” to help cover his surgery.

“The generosity of everyone and the outpouring of love and support has given me the opportunity to fulfill a life-long dream,” Augustyn wrote on Buck’sFacebook page.

She has created “The Buck Foundation” to help other animals like Buck and assist rescue organizations.

Read more on Buck’s Facebook page or at the Montgomery County Police Reporter.