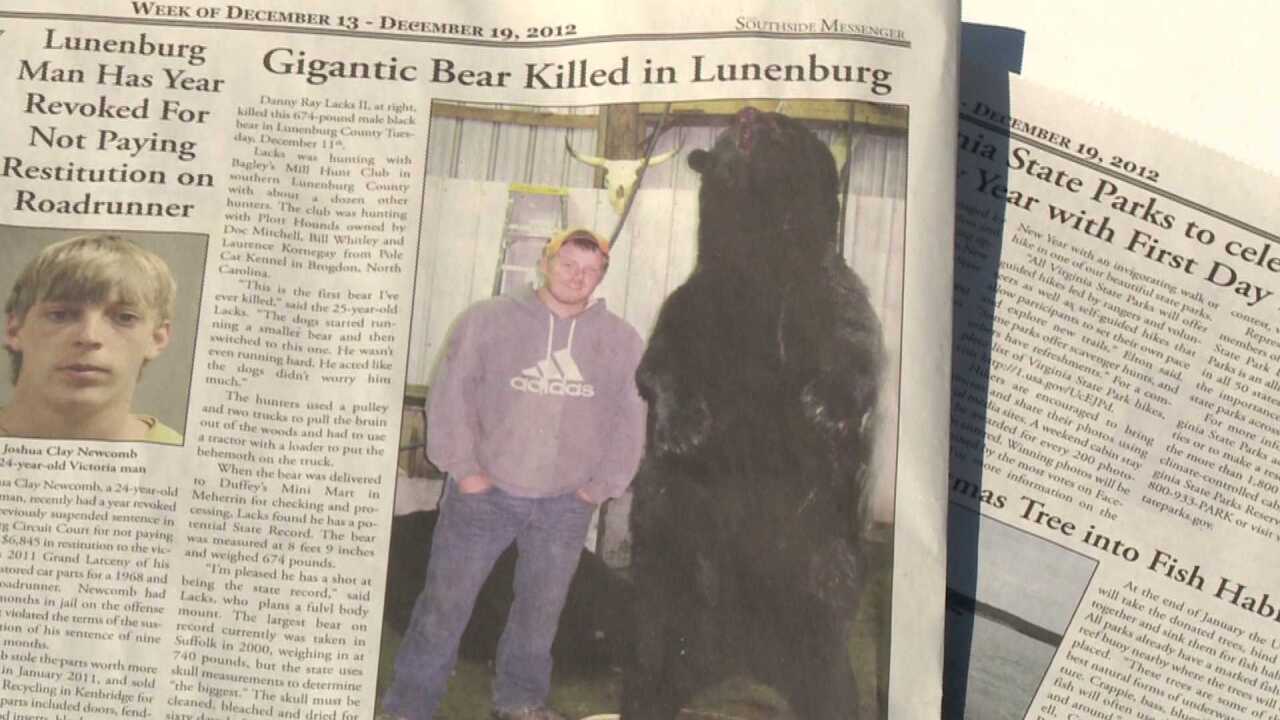 LUNENBURG COUNTY, Va. (WTVR)—There are plenty of small black bears spotted in the greater Richmond area, but a bear recently killed by a hunter could take the state record for its size.

A young hunter killed a big black bear in Lunenberg County on Tuesday. CBS 6 traveled to south west to the county to find out how common large bears like this are and why closer to the city bears are becoming a more common sight.

The massive black bear bagged by local DJ Lacks sits in the back of a pickup truck. The 25-year-old brought down the bear with his rifle, shooting it from 75 yards away in the woods of Lunenberg County.

It took all day to remove the bear from the woods.

"This is the first one ever,” said Lacks. “It's bringing more attention than I want, but it comes with the territory."

Duffey's Mini Mart has certainly been abuzz all this week like never before, with something furry and large along Route 360 causing a stir.

L.B. Duffey has owned the store for 24 years. He is amused by the crowds gathering at his store and meat processing plant.

"Everybody has pictures,” said Duffey. “It's on Facebook too.” 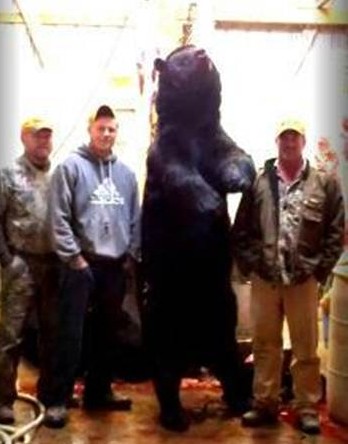 Lacks’ trophy has made hunting world headlines. His photograph with his bear has splashed on the pages of the local news.

Although this animal may have been shot in a rural area, wildlife specialists said more bears are turning up in the most unlikely of places.

"I’m pretty sure that is one for the record books,” Game Warden Lee Walker said. “As Virginia grows and more rural areas become more urbanized we're going to be having more interaction with wildlife."

"Remove the food and you'll remove the bear because the bear will move on looking for something to eat once the food is gone,” Walker added.

Virginia's Game and Inland Fisheries estimated that there are 17,000 bears living in Virginia. Experts said hunting is an essential tool to managing the population.

Certainly at Duffey’s the bagged animal is still the talk of the town.

Curtis Carlton dropped by to see the bear splayed out in the back of the truck. He was awestruck at the size.

"That is a big one,” Carlton said. That’s pretty much all he and others had to say.
“Look at that. Look at his paws,” said Carlton.

Lacks said his phone hasn’t stopped ringing and although he may be uncomfortable with all of the attention he’s had over his first-bagged bear, but he’s definitely relishes a shot at making hunting history.

"You don't see a bear that size,” he said. “A lot of people say even though it's not a state record it’s a mighty trophy."

Although a larger record has been set per weight, the size of the bear’s head will determine if it’s the largest black bear ever caught in Virginia.

Game and Inland Fisheries will soon determine if it is a record breaking bear.