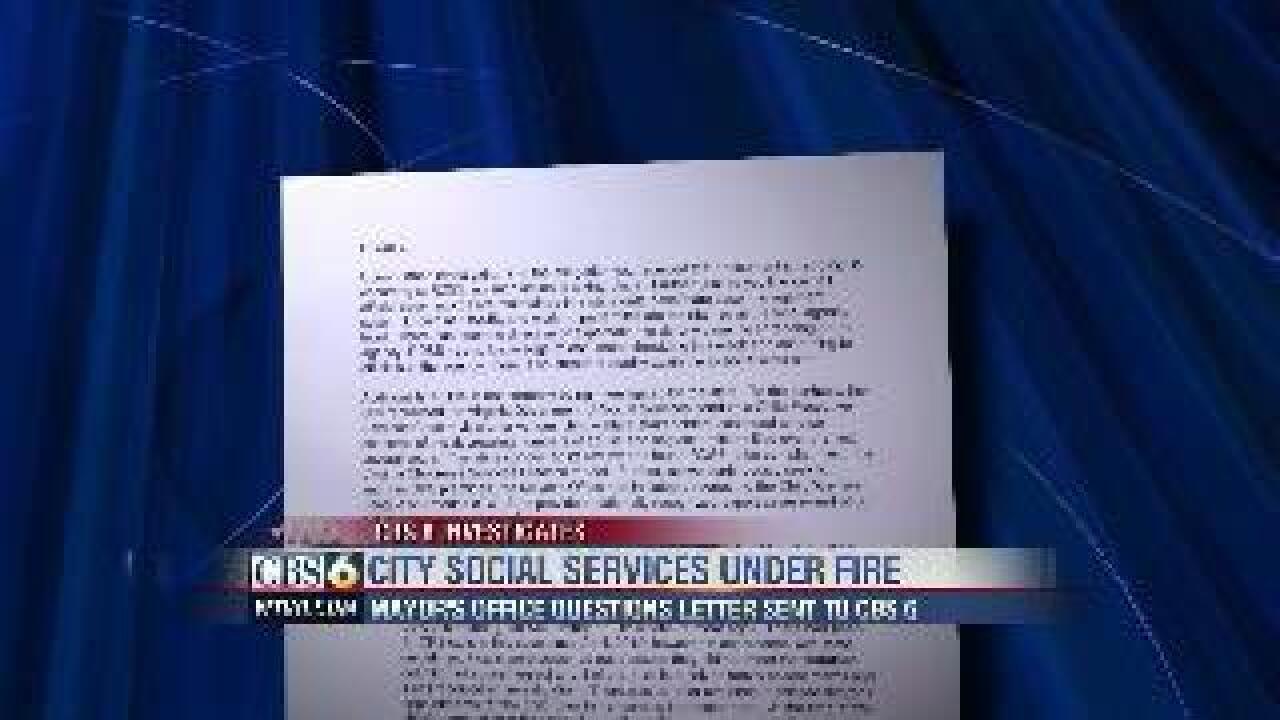 RICHMOND, Va. (WTVR) -- The Richmond Mayor’s Office is questioning the conduct of the city official who oversees Richmond’s Department of Social Services (RDSS), CBS 6 has learned.

That official is Dr. Carolyn N. Graham, the Deputy Chief Administrative Officer for Human Services, and her alleged misconduct involves a letter sent to CBS 6 in the wake of a series of investigative reports about accusations that RDSS has left some children in abusive homes for too long.

Those allegations prompted Mayor Dwight C. Jones to request a state investigation of that department. Richmond City Councilmen Charles Samuels and Chris Hilbert said that they had also been contacted, and were disturbed by the stories they had been told.

One such anecdote involved a toddler who was so malnourished, the two-year-old had been taken to the emergency room of a Richmond hospital more than 20 times, each time being returned to the same caregiver.

Late Tuesday afternoon, five days after we first reported the allegations, Graham reached out to an employee of CBS 6, expressing a desire to defend the agency against the accusations reported in our stories.

But rather than answering our questions in person, Graham said that a statement would be delivered to our station by a messenger prior to that day’s 5:00 p.m. newscast.

The messenger arrived at 4:52 p.m., and remained in a waiting area for several minutes before giving a folder to a newsroom manager.

Inside the folder was a two-page, single-spaced letter.

Beginning with "Hi Catie," the letter listed responses to several allegations against RDSS, including some that CBS 6 had never reported. The letter concluded by saying "The City is tremendously troubled about misinformation being provided to your station from anonymous sources.” At the very bottom, a typed signature: Tammy.

That led us to believe that the author of the letter was Tammy Hawley, press secretary for Mayor Jones. Within hours of receiving the letter, we e-mailed Hawley, asking for clarification. She responded, "Carolyn Graham wrote that. I do not know why she signed my name to it."

Hawley explained more specifically in voicemail messsage recieved later that night that she and the mayor had nothing to do with Graham's statement, and reiterated the mayor's deep concern over the allegations involving RDSS.

In an e-mail reportedly sent from Carolyn Graham to Tammy Hawley, Graham denied sending the letter to CBS 6, saying, in part, "I have too much integrity to do something like that."

But Hawley told us that in a follow-up conversation with Graham, Graham admitted to sending the letter, but said she did not intend to put Hawley's name on it.
When the Mayor's Office was asked for comment on the issue, Hawley responded that the situation involving Graham was a very serious breach of protocol, and said that it violates any code of ethical behavior.

High-ranking city officials have confirmed to CBS 6 that Mayor Jones has decided to ask for Carolyn Graham`s resignation, though no official statement has been made.

CBS 6 attempted to reach Graham Friday by both phone and e-mail. None of our messages have been returned.

Stay with CBS 6 News for the latest on this developing story. Depend on CBS 6 News for exclusive, in-depth investigations you won't find anywhere else.