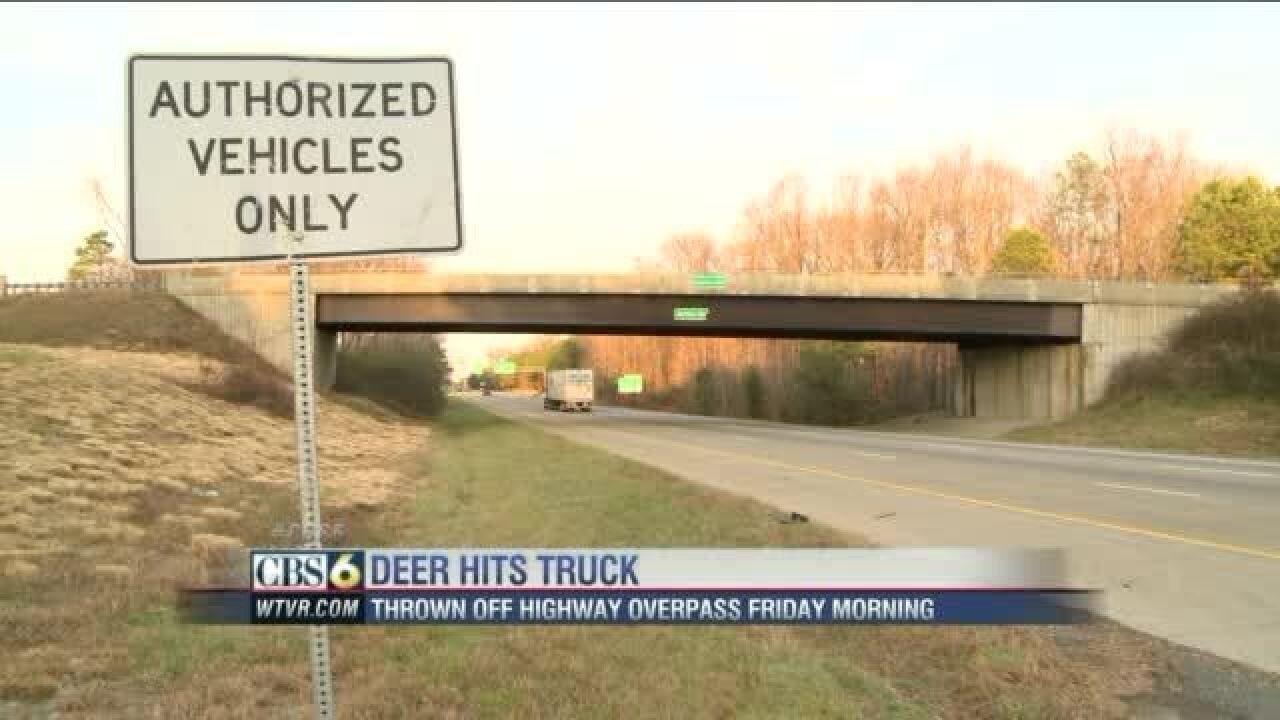 UPDATE: Neighbors on edge as state police investigate deer tossed from I-295 bridge

VARINA, Va. (WTVR) – A truck driver is lucky to be alive after he said a deer was tossed from an overpass along I-295 in Varina and slammed into his big rig.

It happened around 12:30 a.m. early Friday just before exit 22A on I-295 north near Route 5, according to a Miami-based trucking company. [Scroll down for photos of the semi and deer.]

A representative from that company told CBS 6 News that one of their truck drivers saw someone on top of the Buffin Road overpass toss a deer, with a rope tied around its neck, off the bridge.

"All I know is that when I came up on the bridge it wasn't hanging there," the driver told CBS 6 News reporter Jake Burns. "And then I looked up and a deer come over the bridge on a rope swinging at me."

The driver said his truck slammed into the deer carcass, which crashed through the semi’s windshield. The animal narrowly missed the driver, he said.

The rope hanging from the bridge and tied around the deer's neck was severed during the crash. It ended up

slapping the truck driver in the face. The driver also said he ended up with glass fragments in his eyes from the shattered windshield.

The driver was able to call authorities and pull into a gas station, where he stayed the night.

"That's something I would never dream that someone would do: throw a deer over a bridge," the driver said. "What if that had been a bus with people up on it?"

A woman on her way to work in Virginia Beach stopped at the gas station where the trucker sought refuge around 8:30 a.m. Friday.

That’s where she spotted the damaged semi. She said the truck’s windshield was popped inward, but that she saw no other damage on truck's front end.

She snapped photos of the truck and talked to the driver, who told her about the ordeal.

"It was just unbelievable to see something so traumatic like that, or the things that could have happened to this guy," she told Jake Burns. "I just want to make sure that it doesn't happen again and I'm really happy that [the driver ] didn't get hurt."

Flo Moxley, who works at the gas station where the driver pulled in, also wants to know why someone would toss a deer towards speeding cars and trucks.

"I don't see how in the foggiest notion that you even think that's funny,” Moxley said.

Police are investigating the incident.

"Throwing any type of object at a vehicle is very dangerous and is considered a felony," Virginia State Police Sgt. Thomas Molnar wrote in an email to CBS 6.

The trucker said state police were still on the overpass bridge around noon Friday as he continued on his run to New Jersey. On Saturday afternoon, there was a rope still tied to the overpass where the driver said the deer came flying off.

WARNING: Some of the photos of the deer are graphic. 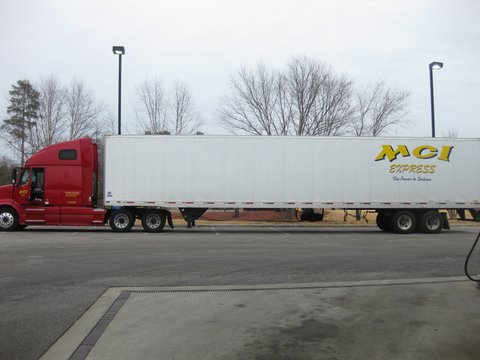