Charlottesville Police said that Smith had phone contact with Erik T. McFadden that Tuesday and then told friends he was going to meet someone on West Main Street.

Smith has not been seen or heard from since.  McFadden, who at the time was living on 14th Street NW, confirmed to Investigators that he did have phone contact with Smith and planned to meet Smith near the Amtrak Station on West Main Street.

Police  and family report that Smith occasionally wears women’s clothes and goes by the name Sage.

Smith’s mother, Latasha Grooms, said she went to pick up her son in Charlottesville for Thanksgiving and was unable to find him.

Flyers have been distributed around Charlottesville and a candlelight vigil will be held Wednesday night, Nov. 28, at Lee Park.

A facebook page has been created for Dashad and can be found here: https://www.facebook.com/FindSageSmith 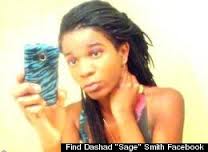