PRINCE GEORGE, Va. (WTVR) - One man's decision to clean house caused a bit of a scare for some neighbors in Prince George Friday morning.

Bob Cleveland, a former area Civil War relic hunter, called in the Bomb Squad as a precaution to help remove several items from his property.

Cleveland said he he started collecting the items decades ago and said that as time passed, he forgot about some of the items.

When Cleveland decided it was time to part with a Civil War-era cannonball and a mortar shell, he figured the safest and most effective way was to call police.

"The one's they're taking away came from around Petersburg," said Cleveland. "If you haven't done anything to it, it's dry powder -- and it's highly explosive. I'd rather have somebody handle it that knows what they're doing."

As the Bomb Squad went to work, many curious onlookers gathered, wondering what was gong on.

"When a third one pulled up over there, I got nosey, so of course I watched," Mary Williams admitted. "And then of course the bomb squad came over there and I was really nosey."

Experts say Cleveland did the right thing by calling police. While the Civil War may have ended in April of 1865, the cannonballs and mortar shells can still be deadly.

Prince George Co. Police Sgt. Jodie Warren said if people have these type of items, they should call authorities versus leaving the relics, for example, somewhere in the woods where someone might come across them and potentially get hurt.

And the crowd that gathered to watch the excitement also thinks Cleveland did the right thing in calling in the pokey.

"I had already heard that there was maybe some type of cannonball found over there -- and they were going to dispose of it properly," Jerry Shinault said.

"I think that was the smartest thing he could do," Williams said. 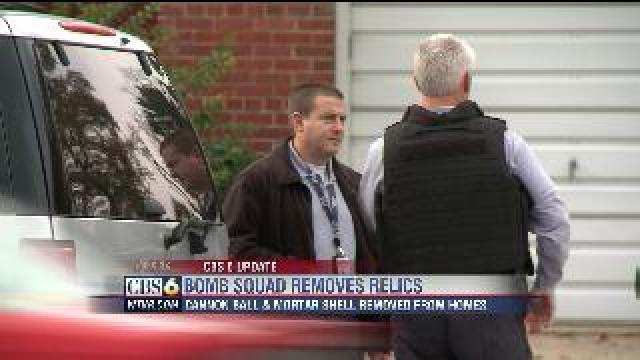