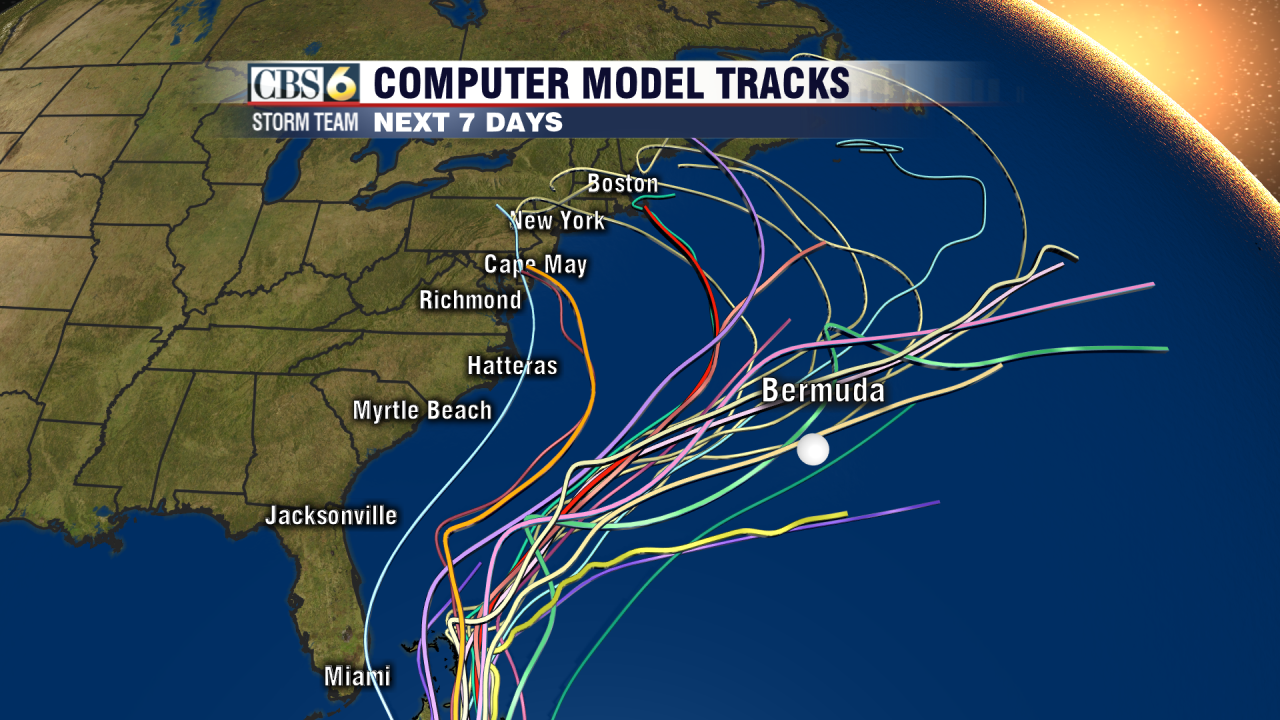 Tropical Storm Sandy became a hurricane at 11 a.m. Wednesday with the center located just offshore southern Jamaica.  The current forecast moves Sandy over Jamaica Wednesday afternoon, across Cuba Wednesday night into Thursday, and through the Bahamas Thursday afternoon and night.  The forecast track for Sandy proves to be difficult for the period of Friday through Tuesday.

There are many environmental factors that could pull or push Sandy in a different direction.  All three scenarios will produce high surf along the coastline.

After passing the Bahamas, the majority of the computer models pull Sandy away from the southeastern coast and move it more towards Bermuda.  The impact to Virginia would be some rainfall and gusty winds Sunday into Monday, with the potential for over 1″ of rain and gusts exceeding 30 mph at the coast.  Rainfall and wind speeds would be less in the metro.

One interesting thing to note is that a bunch of the models, after pulling Sandy towards Bermuda, push the track back towards New England.  There will be a strong dip in the jet stream moving through the eastern third of the United States.  The exact position of this jet stream Sunday into Monday has the slight potential of “drawing” Sandy closer to the northeast coast.  In this scenario, Sandy will lose the characteristics of a tropical storm.

A tropical system is surrounded on all sides by warm air.  In this instance, Sandy would wrap cooler air around its north and western sides, making it more similar to a huge storm we see in fall and winter.  It will still have the potential to produce heavy rain, wind and surf.

The impact to Virginia would be rain and gusty winds Sunday into early Monday (similar to scenario 1), then a continuation of gusty winds into Tuesday.  The highest impact of the storm would be felt more towards New Jersey, New York & New England.

A few computer models are the outlying exception in that once past the Bahamas, they bring Sandy closer to the Mid Atlantic coast without any turn towards Bermuda.  The impact from this would be the greatest of the three scenarios.  Heavy rain and strong wind gusts would develop Sunday into Monday.  Over 1″ of rain would fall in central Virginia, with multiple inches of rain at the coast.  Winds would gusts over 30 mph in the metro, and could exceed 50 or 60 mph at the coast.  Wave heights could surpass 8-10 feet, causing erosion and coastal flooding.  The likelihood of this scenario winning out is very low, probably about 10-15%.

However, the storm is still many days and thousands of miles away.  So, although scenario # 1 is the most likely to win out, there is enough uncertainty that any of the three could materialize.

Stay With CBS 6, We’ll Keep You Ahead of the Storm