(CNN) — The Israeli navy boarded a ship and halted an attempt to break the sea blockade of Gaza on Saturday.

Forces stormed the ship and took the passengers into custody.

“The boarding was carried out only after numerous calls to the passengers onboard,” an Israeli military statement said. “As a result of their unwillingness to cooperate and after ignoring calls to change course, the decision was made to board the vessel and lead it to the Port of Ashdod.”

“Their entire objective was to create a provocation and blacken Israel’s name. If human rights were really important to these activists, they would sail to Syria,” Netanyahu said.

The boat, named Estelle, was about 30 nautical miles off the coast of Gaza when it was stopped, said Reut Mor, an Israeli activist.

Passengers were hoping to call attention to human rights in the Palestinian territory, which has been under an Israeli blockade since 2007. 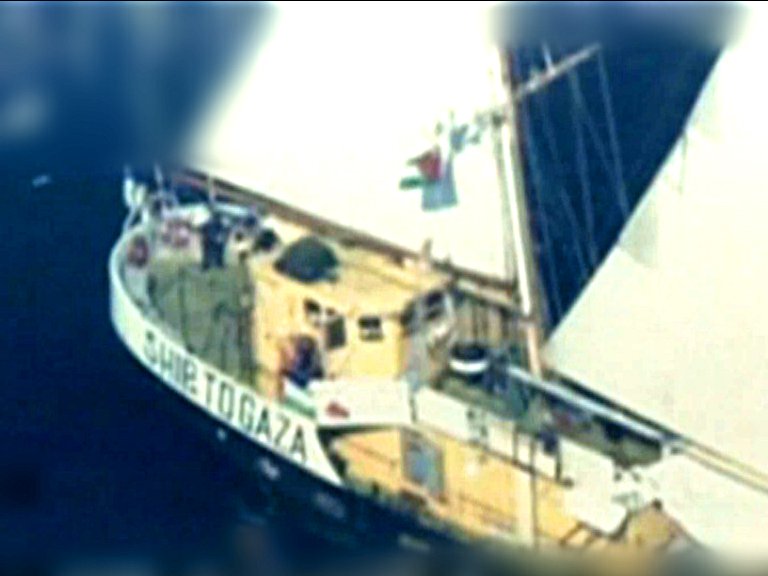 In addition to Mor, among those sailing are a priest and a lawmaker.

The ship Estelle sails under a Finnish flag.

“We are following the situation very closely.,” said Helena Tuuri, director of the Middle East and Northern Africa at the Finnish foreign ministry. “Our clear political view, which is the same one that is held by the entire European Union, is that the blockade should end as soon as possible. It hinders the peace process and it is not helpful for the people, the blockade is very hard on the population.”

The legality of boarding the ship depends on whether one believes the blockade itself is legal, she said.

“There is no clear official opinion about the international law in this case. Different experts have different opinions,” she said.

Vessels attempting to break Israel’s blockade of Gaza have sparked controversy — and violence — in the past.

In 2010, an Israeli raid on one flotilla ship, the Mavi Marmara, resulted in the deaths of nine Turkish activists, deteriorating relations between Israel and Turkey, once close allies. Israel was roundly criticized by many over the deaths.

A U.N. report criticized Israel for its use of excessive force in the incident.

Israel says it is concerned about the smuggling of arms to Gaza militants intent on attacking the Jewish state. Gaza is controlled by the anti-Israel Hamas militant group, regarded as a terrorist group by the United States and Israel.

But activists say Israeli’s embargo of goods into Gaza from land and sea punishes civilians in the tiny and densely populated strip of land along the Mediterranean coast.

Israel has said any organization or state that wants to give humanitarian aid to Gaza can do so in coordination with Israeli authorities via existing land crossings into the Palestinian territory.