(CNN) – Skydiver Felix Baumgartner landed safely on the ground Sunday after a record-shattering jump from the edge of space.

“He made it — tears of joy from Mission Control,” the team said in a live feed.

Baumgartner left the capsule attached to a huge helium balloon at 128,000 feet — 24 miles up — higher than anyone before him. [AD: Enter now for your chance to win a 2012 Prius from McGeorge Toyota!]

After an initial free fall, he opened his parachute and glided down to the ground, where he fell to his knees with his fists raised, then stood up, smiling and hugging members of his team.

It may not have been the longest-lasting free fall. Mission Control said during the jump that Baumgartner did not “break the record for time elapsed” before pulling the parachute.

His highest estimated speed on the way down was 729 mph.

“Guardian angels will take care of you,” said Mission Control just before he jumped.

“The whole world is watching now,” Baumgartner said, before giving a salute and jumping.

Applause broke out in Mission Control when he touched down.

With nothing but a space suit, helmet and parachute, Baumgartner hoped to be the first person to break the sound barrier without the protection of a vehicle. 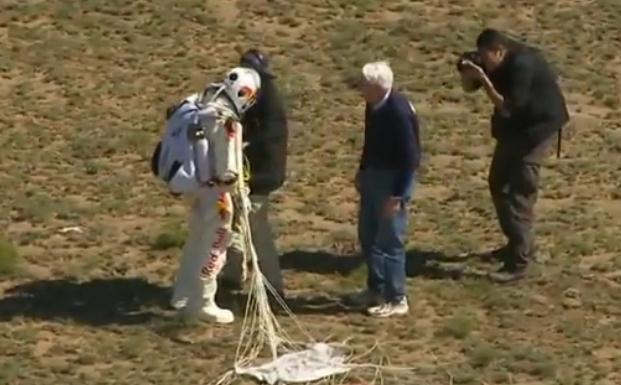 Even before jumping, he set a record for floating higher in a balloon — about 24 miles — than anyone else before.

At that height, more than three times the cruising altitude of an average airliner, the thin air provides so little resistance that after just 40 seconds, he was expected to be free-falling faster than 690 miles per hour.

Baumgartner ascended steadily in a capsule hanging from a helium balloon. Then he opened the hatch, climbed out, jumped off the step with a bunny hop, and formed a crouched “delta” position to maximize his acceleration.

The plan: to fall most of the way in less than five minutes, then deploy a parachute for the final 5,000 feet to earth.

The attempt has serious risks. He and his team have practiced how he can avoid getting trapped in a dangerous “horizontal spin.” His life will also depend on the integrity of his pressure suit, since temperatures could hit 70 degrees below zero Fahrenheit or lower, and the atmosphere will be so thin that his blood would vaporize if he were unprotected.

If he loses consciousness during the five-minute plunge, he will survive only if his parachute deploys automatically.

Another unknown: the effects on the body of breaking the sound barrier. While reaching such speeds can cause stress on an aircraft, planners for this jump believe there will be little effect on Baumgartner because he will be at an altitude at which there is so little air that shock waves are barely transmitted.

After a weather delay of several hours on Sunday morning, the balloon rose from its launch site at 11:30 a.m. ET, with Baumgartner in a capsule hanging beneath it.

He almost made an attempt Tuesday from his launch site in Roswell, New Mexico. But as he was waiting in his capsule for the giant helium balloon to finish inflating, a gust of wind twisted the balloon like a spinnaker, and ruined it.

Baumgartner is an Austrian helicopter pilot and former soldier who has parachuted from such landmarks as the Petronas Towers in Malaysia and the Christ the Redeemer statue in Rio de Janeiro.

He has been preparing for his latest feat for five years — both physically and mentally.

“You have to remember all the procedures,” he said in an interview during testing for the jump. “You know you’re in a really hostile environment. And you cannot think about anything else. You have to be focused. Otherwise, you’re gonna die.”

The balloon being used is light and translucent. The material is only .0008 of an inch thick, one-tenth as thick as a sandwich bag, and it will change shape and size as it rises.

After Tuesday’s launch was scrubbed, Baumgartner tweeted, “We’ve made it so far, there’s no way turning back.”

The 43-year-old former military parachutist is backed up by the Red Bull Stratos team, which includes a former NASA crew surgeon, record-breaking aviators, and designers of innovative aircraft.

The pressurized helmet and suit, which restrict Baumgartner’s mobility and together weigh 100 pounds, have been equipped with sensors and recorders to measure everything from his speed to his heart rate. Cameras on the ground and on the capsule are transmitting live images of his attempt at http://www.youtube.com/user/redbull.

The record for such a jump is currently held by Col. Joe Kittinger, who in 1960 jumped from 102,800 feet as part of a U.S. Air Force mission. More than 50 years later, Kittinger is a consultant on Baumgartner’s effort, and will be the one from mission control who speaks to Baumgartner over the headset throughout the attempt.

After a test jump earlier this year, when the two lost communication with each other, Baumgartner told CNN he realized how much he relies on Kittinger as a mentor.

“Immediately you can feel how lonely you feel,” Baumgartner said. “I wanted to hear the voice because I am so used to this. Every time we have been practicing on the ground, Joe was talking to me. So I am used to the voice, and [it] makes me feel safe.”

Kittinger has also been giving Baumgartner advice on what to expect during his attempt. For example, he said, when you’re at an altitude so high that you see the curvature of the earth, “there’s no way you can tell how fast you’re going, because there’s no visual cues.”

He also learned the importance of patience back when he was making jumps, Kittinger told reporters last week.

“On one occasion, I waited 30 days to launch a stratospheric balloon,” he said.