Space shuttle behind schedule as it inches to final resting place

By Josh Levs and Michael Martinez

LOS ANGELES (CNN) – The space shuttle Endeavour, accustomed to hurtling through space in its heyday, seemed to creep at a snail’s pace as it headed toward its final resting place Sunday.

The 22-year-old Endeavour, whose first takeoff for the International Space Station was “flawless” according to NASA, symbolically inched along the streets of Los Angeles in its journey to the California Science Center, where it will lie in retirement, showcasing the end of an era. The final U.S. space shuttle blasted through 123 million miles of space over 25 missions in its career.

The shuttle’s 12-mile trek was expected to end Saturday night, but obstacles and a mechanical issue slowed it down, said Sgt. Rudy Lopez of the Los Angeles Police Department. It is expected to arrive between 9 a.m. and noon (12 p.m. to 3 p.m. ET), Lopez said.

Seventy-eight feed wide and 122 feet long, the Endeavour was designed to slice through the open atmosphere — and faced a whole new kind of test riding a transporter platform along city roads to the cheers of onlookers.

While preparations had been taken — including dozens of trees cut down and traffic signs removed — in some places the shuttle had to navigate a very narrow path, threatening to knock down, or be damaged by, historic trees or poles, said Lopez.

“There were a lot of identified trees that we did not want to cut down because they were dedicated to Martin Luther King Jr., so we made all the effort to avoid them,” said Lopez.

That was an especially tough task at night, slowing the trip down, he said.

But in characteristic fashion, the Endeavour pulled through. Lopez said he had no reports of any damage to or by the ship.

Specialists were part of the convoy to make sure the Endeavour and its transporter platform, which together weigh more than 80 tons, didn’t stress underground water and sewer systems. Crews laid 2,700 steel plates on parts of the route.

While the big crowds that lined streets and gathered on rooftops Saturday were not out early Sunday, crowds may show up for the expected arrival at the museum, Lopez said.

Authorities called on spectators to make sure to bring plenty of water.

Gwendolyn Crews, owner of a preschool, told CNN she was bringing her entire preschool to watch the Endeavour’s arrival at the museum.

“I think this is a history-making moment here in Los Angeles, California, and I want to be able to share this with my kids, my grandkids, my great-grandkids … and the children of our school,” Crews said.

“This once-in-a-lifetime event is a cause for celebration,” Los Angeles Mayor Antonio Villaraigosa said of the shuttle’s trip through the city.

Latasha Covington and her children, 9-year-old Skilyn and 4-year-old Amarie, brought a chair out Saturday to stand on to get a better view.

“I’ve been here 32 years in L.A. and I’ve never seen anything like this, so it’s part of history. I wanted them to see that,” Covington said.

The respect was a fitting tribute to the shuttle, which was delivered to Kennedy Space Center in May 1991.

Named for the first ship commanded by British explorer James Cook, Endeavour cost of $1.7 billion when it rolled out as a replacement for Challenger, which exploded shortly after its 10th launch.

Over the next 20 years, Endeavour flew some of the highest-profile shuttle missions. It flew a Spacelab mission and numerous International Space Station assembly missions and rendezvoused with Russia’s Mir Space Station.

The science museum has been trumpeting the arrival of the shuttle, saying it is building a new addition to its facility and will begin displaying Endeavour on October 30. 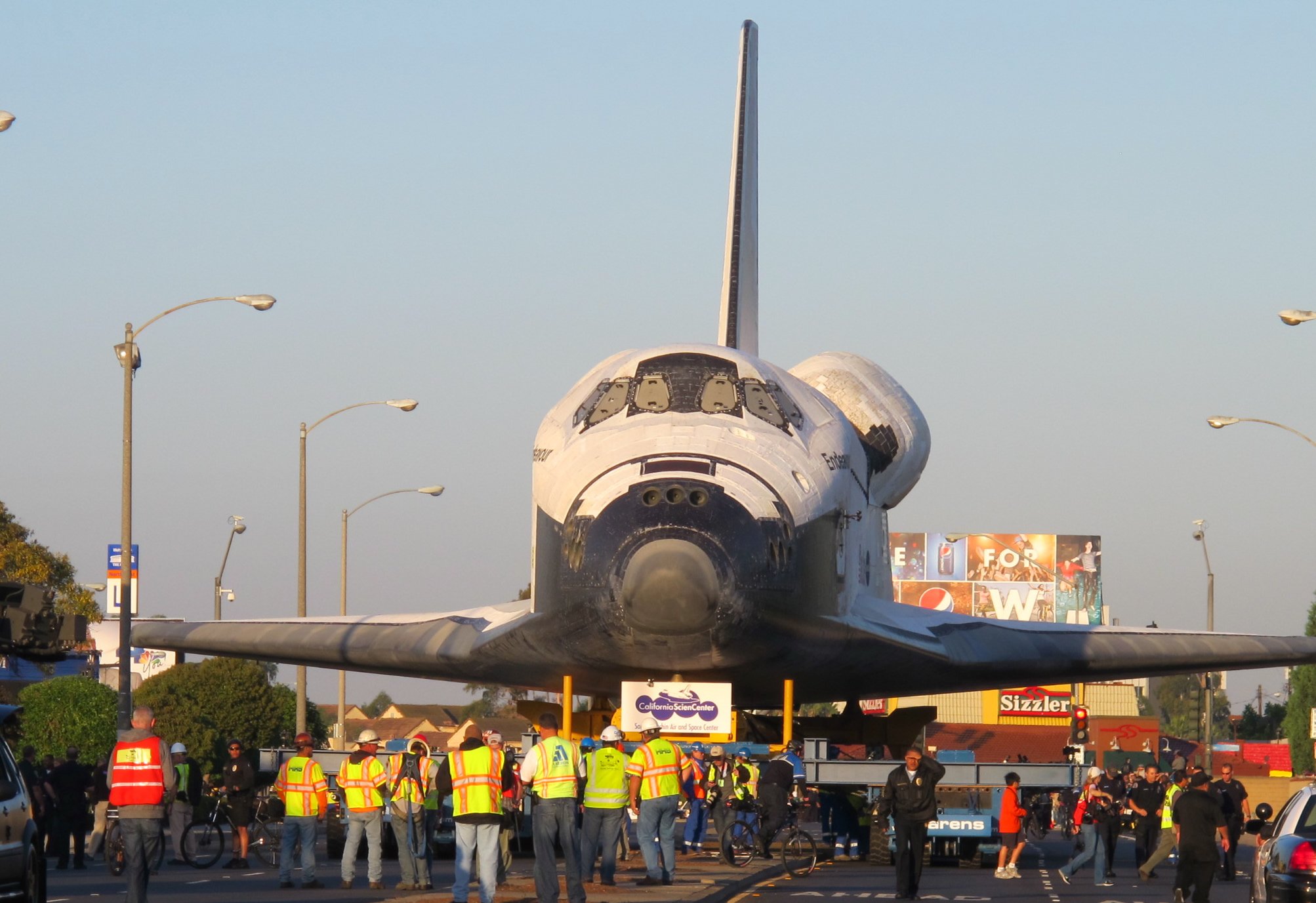