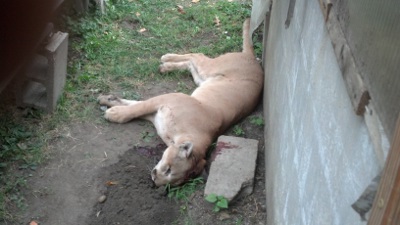 (WHOTV/13, by Kelly Maricle)– A mountain lion spotted in a Des Moines backyard Thursday morning has been killed by police.

Des Moines police say a call came in around 9:30 a.m. about a possible mountain lion sighting in the 3900 block of Columbia Street. When officers searched the area they found the mountain lion in the backyard of a home.

Officer said that they knew it would not be safe to let the cat continue to roam. So when the cat tried to dash away, officers shot it.

Officers said that the lion measured 6’3″ from nose to the tip of the tail,.

The Iowa Department of Natural Resources has removed the mountain lion’s body.

Police say there was a report of a mountain lion sighting around Madison Elementary a few hours before the cat was shot, but an ARL officer responding to the area did not locate it.

A mountain lion sighting was reported in Norwoodville in July but there is no confirmation that this was same cat.