CHESTERFIELD COUNTY, Va. (WTVR) - There were some tense moments Thursday after a plane with landing gear problems radioed it needed to make an emergency landing at the Chesterfield County Airport.

The twin-engine plane, which had two people on board, landed safely around 12:15 p.m.

Chesterfield County Fire Department's Jason Elmore said the plane, which was en route from Monroe, North Carolina, called in at 11:05 a.m. when it was about 45-minutes away from the airport.

Elmore said maintenance personnel talked the crew through emergency procedures so that they could hand crank the plane's landing gear, which was stuck in the up position.

He said the people on the plane were able to crank the landing gear down, get it locked in place -- and do a flyover before landing. [BONUS: Watch plane fly over runway before emergency landing]

Elmore said Chesterfield fire and EMS crews responded as soon as they received the call and were able to be on the scene moments after the call.

"We were very fortunate today that we did not have to use those resources, but we were prepared to do so if we needed to," Elmore said. "All of our prayers were answered."

“We definitely had a situation. The pilot had some landing gear issues. We were able to get here quickly because we have a fire station across from the airport,” Elmore said.

CBS 6 News' Greg McQuade described a scene of joy and jubilation at the airport after the plane landed safely.

The plane is registered in Hopewell.

The twin-engine prop plane with six seats will be checked out to make sure it is safe to fly again.

Refresh WTVR.com and watch CBS 6 News for continuing coverage of this developing story. 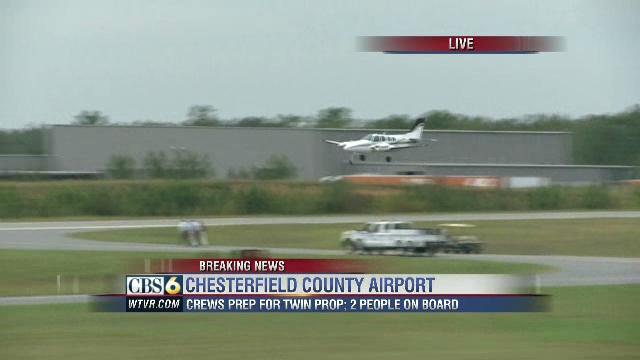