Sirens sound after orange cloud is spotted over Hopewell

HOPEWELL, Va. (WTVR) - Two sirens sounded in Hopewell Monday after an orange chemical cloud was spotted hovering over parts of the city.

Officials later said that nitrogen oxide was released from the Honeywell plant around 4 p.m.  The massive orange cloud was spotted coming from the plant and headed across town.

Officials said a few minutes after the cloud was released, that sirens were sounded to alert residents. Additionally, the fire department was dispatched to the plant's parking lot.

CBS 6 News senior reporter Wayne Covil said he talked to Bryan Shelton, who was driving on Route, when he saw the cloud. He described it as a thick fog that enveloped his white pickup truck.

There was an "orange cloud covering the whole sky – where I was at," said Shelton. He

also said he was going to call his job to make sure it was ok to come back because he "didn't  know what blew up over there."

Another alarm was later sounded in the city as firefighters gave the all-clear that the cloud had dispersed.

A Honeywell company spokesperson released a statement to Covil just before 5:30 p.m. that said no one was injured -- and that the plant normally emits the gas.

"This afternoon at approximately 4:00 p.m., Honeywell’s Hopewell facility experienced a release of nitrogen oxide (NOx), a gas that is generated from the plant’s manufacturing process and which the facility emits within permitted levels. There were no injuries, but as per our procedures, the plant activated its emergency response measures and notified local emergency responders. Emissions of NOx are back within permitted levels and Honeywell is investigating the incident," wrote  Honeywell's John McCarthy.

Several citizens called CBS 6 and posted messages on the station's social media sites about the gas cloud. Some people asked and wrote if they should stay indoors -- and wondered if the orange cloud was toxic.

Andrew Hernandez wrote: What is that ugly brownish smoke coming from the Hopewell power plant -- is it poisonous should we stay inside?

The cloud was seen headed toward the Appomattox River and in the direction of Chesterfield before it dissipated. 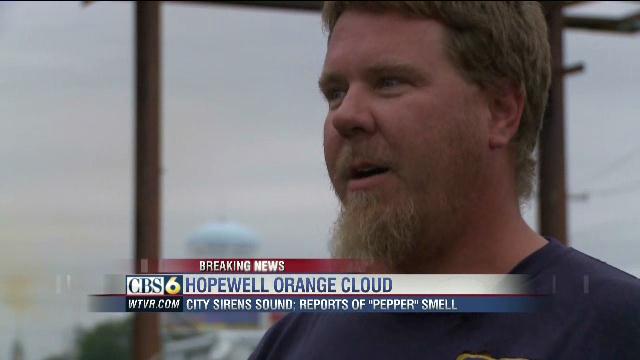