HOLMBERG: Pet wolfdog escapes and attacks, and will pay for it with his life 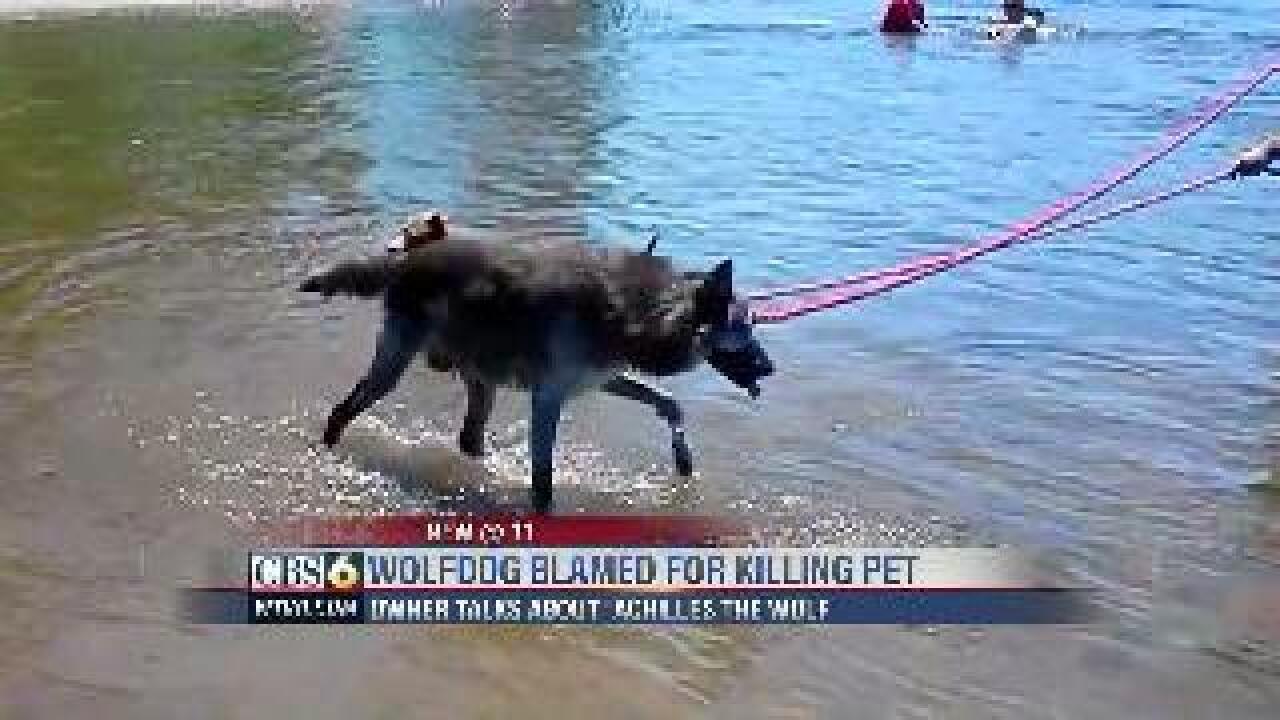 UPDATE: Dog sanctuary wants to save Henrico wolfdog from being euthanized

In the end, the wolf was identified as pet, a much-loved wolfdog that had his own Facebook site, a creature well-known to visitors to Belle Island.

Achilles the Wolf, as he’s known, will now pay with his life for the fatal attack on a distant neighbor’s dog. Achilles’ owner says it was his canine’s first and only act of violence.

It all started before 9 a.m. when the high-percentage wolf hybrid clawed out of his 10-foot-high fence ran down the road and attacked a much-smaller dog, about 7 pounds.

That led to the chase.

Antoinette “Boo” Robertson was inside her home when her son-in-law came rushing to tell her he had seen the wolf and all the police cars.

They jumped in her car and joined the search for the dog, filming cell phone video of the canine that aired on CBS-6.

Roberston said it sure looked like a wolf to her, taller than her hip with a wolf’s long snout and tail.

Neighbors down the road have regularly heard howling, like a wolf.

“A wonderful howling,” said Vicky Nicoletti. “Like a wolf in the wild.” (There’s a YouTube video showing Achilles howling in his enclosure.)

Nicoletti said she wasn’t concerned that there may be a wolf in the neighborhood.

Neither was Sharon Talley, who had seen Achilles being walked through the quiet streets by his owner.

“Nothing eerie about it,” Talley said. “He’s got a black hybrid. It’s pretty . . . never had any problems before.”

The owner, Guy (pronounced Gee), is a young man of French decent. He didn’t want to provide his last name.

He said he got a call at work at about 9 am that Achilles had somehow gotten out of his enclosure and 10-foot-high fence.

“I actually caught him in my back yard. After me and the police officers chased him for two-and-a-half hours, he came home.”

Guy said Achilles is a high-percentage hybrid. “Mostly wolf, yes,” he said. “He’s mixed with a malamute, but he looks exactly like a wolf. You can’t tell the difference. . . I’ve had him for five years. I’ve had him since he was five weeks old. He’s never been mean, aggressive . . . I’ve taken him to Belle Island all the time. He’s pretty much famous up there. I mean, everybody comes up and knows his name, doesn’t even know my name.”

He said Achilles somehow clawed a tiny hole in his reinforced enclosure. He believe his wolfdog was powerfully motivated, perhaps by a nearby dog in heat.

As soon as he learned his dog had injured the distant neighbor’s dog, “I went to their house and offered restitution, pay for the vet bills.”

He said it was decided to euthanize the injured dog.

That broke his heart, he said.

Lt. Toney with Henrico Police said that they captured a large grey dog that weighed about 100 to 125 pounds. The animal is now in the custody of Henrico Animal Control. He said the owner surrendered the animal and no charges will be pressed against the owner.

“I willingly, I did not have to, but I willingly signed him over to the Henrico Police Department for euthanization,” Guy said. “You know, that’s the hardest thing I’ve ever done, to have to put my dog in a truck for the last time I’m ever going to see him. That’s my best friend. It’s the first dog I ever had, raised him from a pup.”