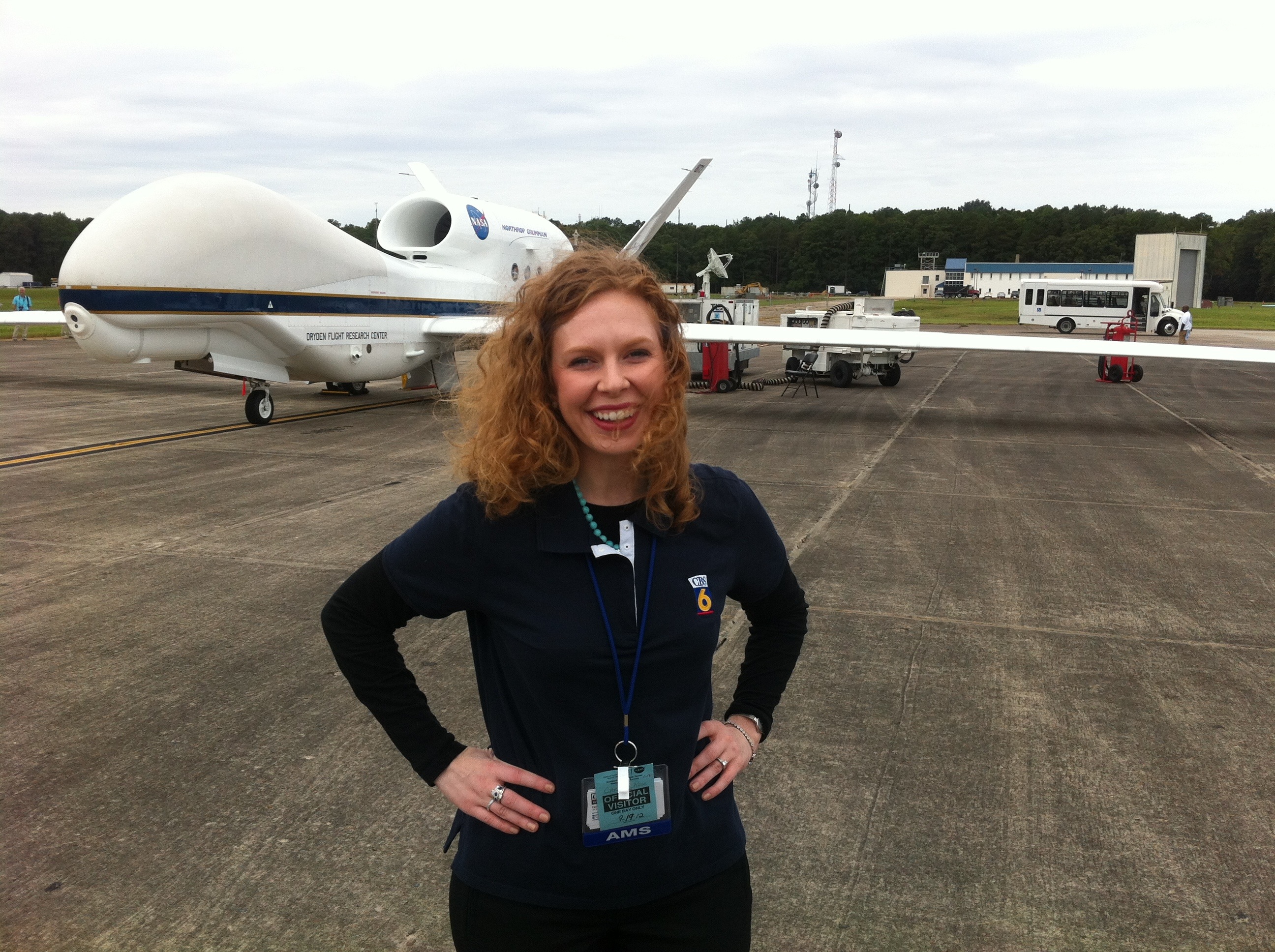 WALLOPS ISLAND, Va. (WTVR) – Meteorologist Carrie Rose is on assignment today at NASA’s Wallops Flight Facility on Virginia’s Eastern Shore. There she got up close with an unmanned aircraft called a “Global Hawk” that can fly up to 65,000 feet above ground level.

This high-flier has a wingspan of a Boeing 747, but is piloted with computer mouse-clicks by a team of pilots at Wallops in Virginia and Dryden Flight Research Center at Edwards Air Force Base in California.

The goal of this aircraft is to fly high above tropical systems until approximately mid-October, looking down into storms with near-satellite quality instruments, learning about the environmental conditions of a cyclone from the top down.

Scientists are trying to figure out the processes that either help or hinder hurricane formation and intensity change. One factor of particular interest is the Saharan Air Layer (SAL) that comes from Africa into the east Atlantic as a hot, dry, dusty air-mass.

Scientists still don’t know for sure if the SAL encourages or hinders cyclone intensification. But the Hurricane and Severe Storm Sentinel (HS3) mission is already getting information about the SAL from its proximity to Nadine this month. This is the first year ever that Global Hawks have flown from the East Coast, and it’s happening from Virginia.

Right now, only one of the two Global Hawks on HS3 duty is in Virginia, but the second will be operational with the first by the 2013 and 2014 missions based from Wallops. In fact, NASA is so invested in Virginia being the launching point and home-base for this hurricane research that it is going to build a more permanent work-space for the staff on site at Wallops.

Right now, the pilots and other project specialists work out of two high-tech trailers next to the runway.

While Carrie was at Wallops today, the Global Hawk left for a 25 hour flight to investigate Tropical Storm Nadine in the eastern Atlantic. So far on this year’s HS3 mission, this aircraft has explored Hurricane Leslie on September 6-7 as it flew from California to Virginia (taking a detour to Leslie in the Atlantic along the way).

Then Nadine was the next system of interest this month, remaining over the Atlantic Ocean without threatening the U.S. Tropical Storm/Hurricane Nadine has been investigated three times now, including today’s flight, providing crucial information about a storm far from any landmass.

The Global Hawk is able to act almost like a satellite, taking dropsonde data with multiple passes over a cyclone, scanning for frequent atmospheric data we couldn’t dream of having on a tropical system over open waters even five years ago, when the HS3 mission was born.

So why was Virginia selected over other NASA sites, even Kennedy? Location, ease of access for missions, and storage space!

It’s big enough to house a Global Hawk with a wingspan as wide as a Boeing 747’s. A home for the Global Hawk was crucial. In addition, the site needed accessible runways whenever it was time to fly.

Finally, the site needed to be within the ease of flight range. For Atlantic, Gulf and Caribbean studies, Virginia is excellent for an aircraft that can fly as much as 30 hours over 10,000 nautical miles!

Click HERE to watch Carrie explain why Wallops is best-suited for this HS3 mission.

Here is that just-the-right-size hangar.

And you can see the Global Hawk in the hangar with room to spare here.

Click HERE to see the wingspan as Carrie saw it in the hangar.

But why did Wallops have such a huge hangar to begin with? NASA Wallops Project Manager Ron Walsh explains HERE.

When the Global Hawk takes off and lands, it has support not only from the crew on the ground, but also from a smaller plane guarding it from other planes or problems. This plane is called a "chaser plane."

Click HERE to learn more about this unique, vital aspect of the HS3 mission from Rebecca Powell with NASA Wallops.

Watch HERE as the environmental Global Hawk rolled out of the hangar today before its investigative flight to Tropical Storm Nadine.

And watch HERE as the unmanned, high-altitude plane took off from Virginia's Eastern Shore this afternoon to fly all the way to nearly the Azores to Tropical Storm Nadine, all as it was controlled by pilots on the ground using computers and mouse-clicks.

Carrie asked one of the mission pilots about flying an aircraft this way. The HS3 pilot explained that even though he can't feel the turbulence or pressure changes as if he were physically in the cockpit, he still sees what the Global Hawk sees through its camera and instrument reports.

Weather is the number one stress-factor on a pilot flying the Global Hawk remotely. As this pilot stated, "Wind shear is not good," so the flight path may be adjusted, literally, on-the-fly.

The NASA HS3 pilot stressed to Carrie that even though the trailer-cockpit may look like a video game arcade, it's not at all like that in reality. Rather, he said, "fly by mouse" is much like the hours of simulator-training these highly-skilled pilots must endure over time.

In addition to the pilots and support staff in the trailers, there are the mechanics and electrical engineers who keep the Global Hawk in tip-top shape. Gina Patrick is one of the electrical mechanics working in this mission.

Click HERE to hear her perspective on why having HS3 in Virginia is special.

Global Hawk research is the future, and you can see a map here of potential future research flights into the Arctic.

In case you're wondering if you can come see future Global Hawk flights at Wallops, they are not open to public viewing yet. But they may be in the future! Stay tuned.