Will Virgil Goode tip Virginia for Obama or Romney? 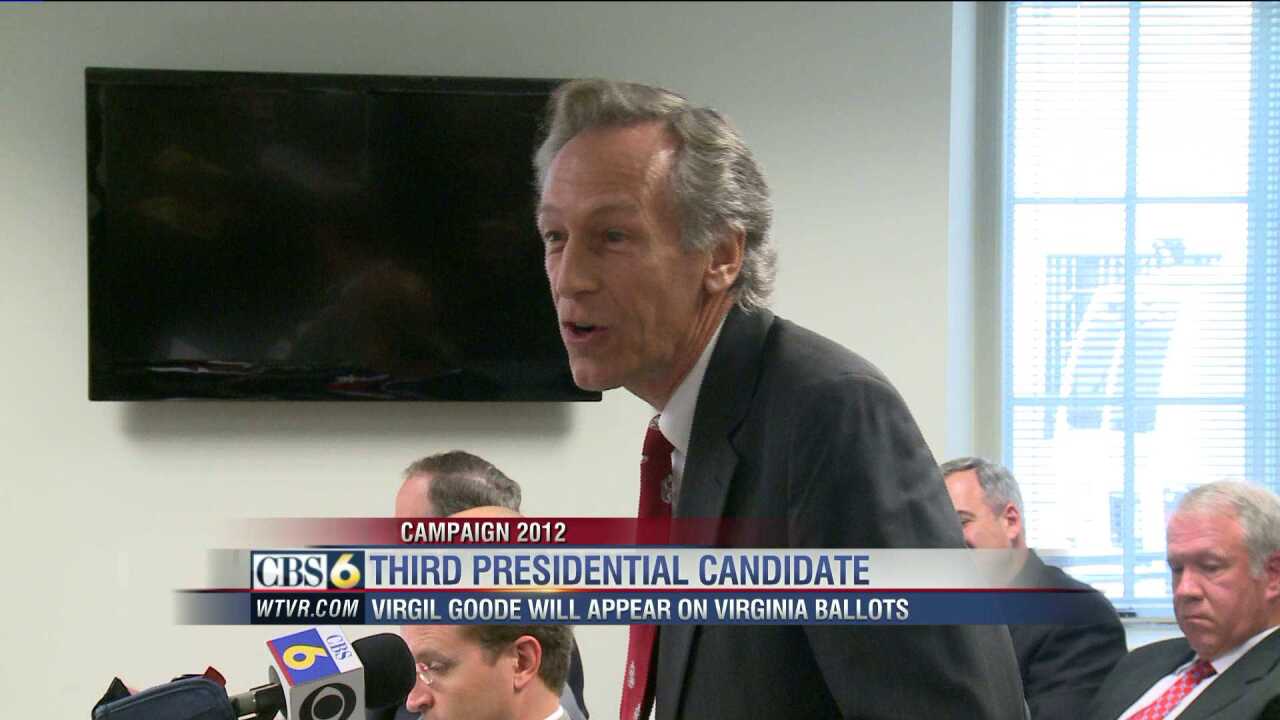 RICHMOND, Va (WTVR) - A former Virginia Congressman has secured a spot on the state's ballot as the Constitution Party's presidential nominee.

Now when Virginia voters head to the polls in November, they will not only have Democratic candidate President Barack Obama and Republican presidential hopeful Mitt Romney to choose from, but they now have a third candidate, Virgil Goode.

Tuesday morning the former U.S. Representative was allowed by the State Board of Elections to appear on Virginia's ballot as the Constitution Party's presidential nominee.  It was a decision not favored by Republicans.

"We're asking you to take a second look," said Chris Nolan with the Virginia Republican Party.

Some political experts believe Goode could take votes away from Romney.

"If they (the Republican Party) would listen to the people I think the Constitution Party is going to votes from dissatisfied Democrats," said Goode.

The GOP argued the required signatures from Virginia voters Goode collected may be invalid for several reasons.

"Had they known that their signature was on the Constitution Party's petition for president they wouldn't have signed it," said Nolan.

And it's the allegations of possible fraud that created a firestorm inside the State Board of Elections.

"It's really ludicrous for them to make that allegation," said Goode.

Goode even challenged Republicans to revisit some of the people now supporting him for president.

"You can call him at Main Street Amoco right now and he will tell you he signed it on July 23rd," said Goode.

"I stopped at the Dairy Queen and went to Mathews County," recalled Goode.  "I was at the Salem gun show on the next day."

The Constitution Party said it will continue on the road to the White House, despite any possible roadblocks from Republicans.

"If you are going to buck the establishment or if you want to get out there and make a difference you better watch out because the people that hold the power are going to try and stamp you down," said Virginia Constitution Chair Mitch Turner.

As it stands, Virgil Goode's name will appear on the ballot for the Constitution Party for president.  But the allegations of voter fraud are still being investigated by the Attorney General's office, who would later decide to remove any candidate from the ballot before the elections in November.