As a result of the accident, the dump truck spilled gravel onto the highway.  The left and center lanes of I-95 south were closed for several hours for clean-up.

"Not only do crews have to upright the dump truck, they have to remove the gravel and dump the gravel into another dump truck here on scene," said Molnar.

Traffic in that area was backed up three miles at one point.  Trucker Rick Hewitt found himself caught in the backup, during his trip from Pennsylvania to Florida.

"It doesn't do any good to get angry or to get in a hurry," said Hewitt.  "It's part of being a truck driver, you have to learn to be patient."

The driver of the dump truck, Alan Hankins, 28, has been charged with following too close.  The crash remains under investigation. 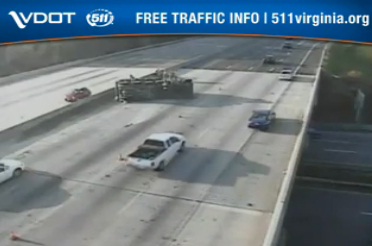