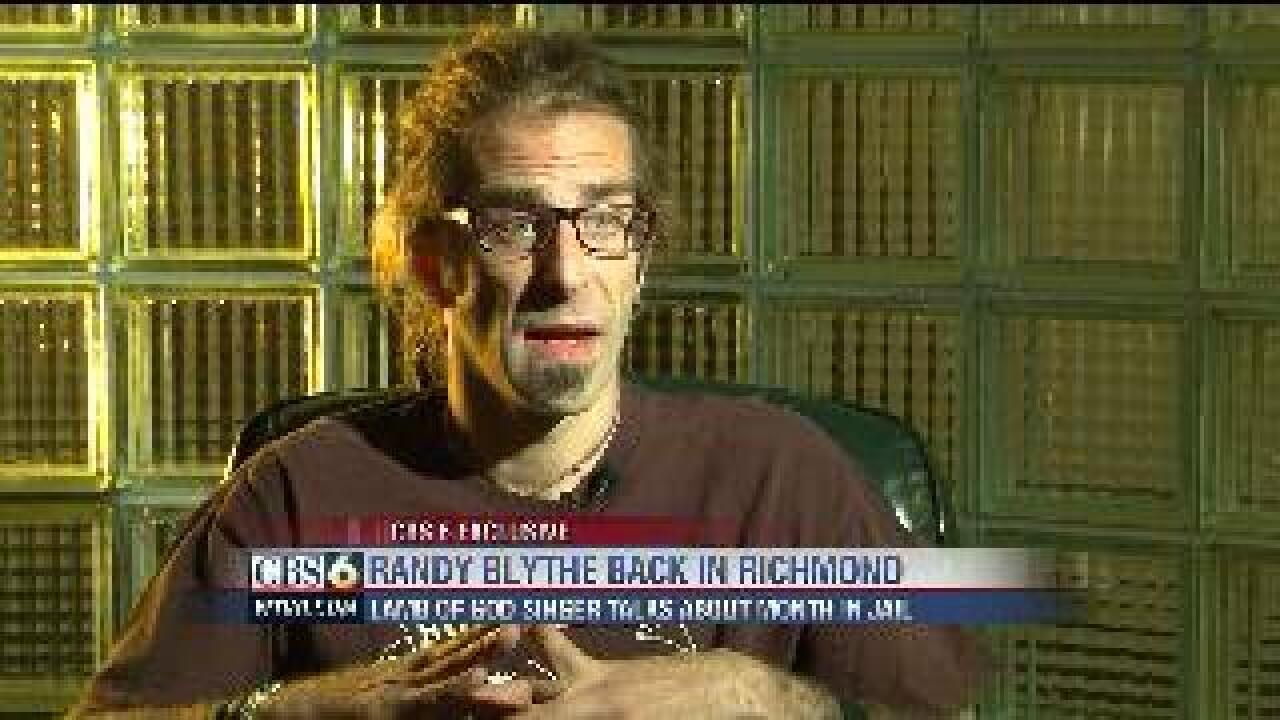 RICHMOND, Va. (WTVR) - Richmond heavy metal vocalist Randy Blythe learned a smattering of Czech and Mongolian and a whole lot about Pankratz prison during his 37-day stay at the notorious Czech Republic penitentiary on a manslaughter charge related to the death of a fan there two years ago.

Few at Pankratz spoke any English. His cellmates were Mongolians. They taught each other their languages, Blythe said during a wide-ranging interview with CBS 6 Monday. The singer of the internationally known band Lamb of God (LOG) flew back into Richmond late Friday night after being released.

He was detained by a heavily armed and masked SWAT-like team at the Prague airport on June 27, when the band arrived at Prague for a show there – at the same venue where the death occurred two years earlier.

Blythe said they had no idea a fan had died at the show. Prague investigators had contacted the U.S. Justice department about the case, Blythe said, but the U.S. authorities didn’t cooperate with the Czech investigation.

He recounted his arrest in the airport, and his incarceration in an aged prison famed for guillotine executions by the Nazis during World War II, along with a long list of political dissidents who have been locked up there.

He ate a lot of soup. He worked out in his cell. He read, wrote in his journal, plotted a novel and wrote numerous songs, including a country song for his friend, Hank Williams III, and a LOG song specifically about Pankratz.

He had no idea when he would get out after he had posted bail – twice. He feared it could be a year.

“The day that I was let out came as a complete surprise to me,” he said.

Blythe said it was crucial that he had given up alcohol two years ago - that he was able to face the heavy experience with a clear head and a calm spirit. “Thank God I am completely sober,” he said.

He said a lot of people in the prison and courts system knew who he was because the case got a lot of attention in the Prague media, but he was treated like any other prisoner.  No special treatment, no rough treatment.

He said one of the challenges is getting people – including those who may sit in judgment of him – to understand the heavy music scene, that stage diving, crowd surfing, slam dancing is all part of the release the music offers.

Despite his scary detention, Blythe said he’s definitely going back if there is a trial.

“I feel ethically responsible to go back there and face this charge,” he said. He added that he has carefully searched his memory and his heart for any hint that he’s responsible for the fan’s fatal injuries. He would tell the judge if he found anything, he said. He couldn’t live with himself otherwise, he said.

“This family right now is in a lot of pain, and they deserve some answers,” Blythe said. “To lose a child is the worst possible thing a human can go through, I think . . .”

Plus, he said, “I want my name cleared. I have to go around the world and tour, you know. That’s what I do. I’m not going to hide here. I’m an innocent man. I’m going to go to court and see what happens.”

Reflecting on his time in Pankratz, Blythe said he had three meals and a roof over his head. He recalls seeing slums while touring India and Venezuela and he thinks about all the turmoil around the world - our soldiers in Afghanistan.

His time of uncertainty in a Czech Republic prison, he said, is a comparatively small thing.