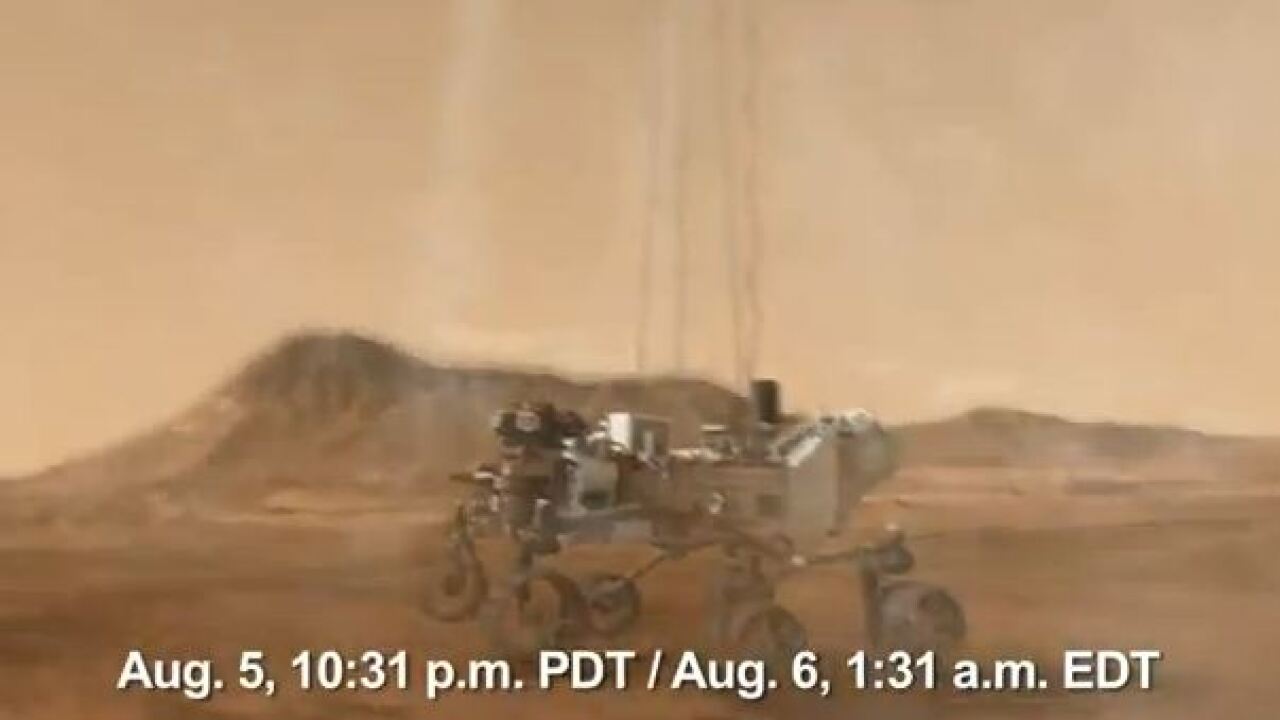 RICHMOND, Va. (WTVR) - NASA scientists will find out in a couple of days whether their years of effort will pay off. On Sunday night into early Monday morning, the biggest and most complex Mars Rover ever built, named "Curiosity," is scheduled to touch down on the Red Planet. It's two-year mission is to search for signs of whether there was ever life on Mars by studying the varied landscape provided by Gale Crater and the nearby mountainous outcrops.

Meteorologist Carrie Rose spoke with Dr. Tyler Nordgren of the University of Redlands about his role in the NASA Curiosity project. Nordgren designed the sundial on the rover that will be used to color-balance all the images Curiosity's main camera, nicknamed the "Pancam," takes while on its mission.

As you can see in Nordgren's picture above, there are four color tabs on each corner: red, green, blue, and yellow. The team of scientists know the exact shades of each of these colors when they're on Earth in the lab. As Nordgren explains, this is a simple concept with an important role.

"When you look around at the rocks (on Mars) to the naked eye, everything is going to have this pinkish-red glow to it. And that doesn’t mean the rocks are necessarily red, they’re just being illuminated by this red light. So that’s why we have this target, this sundial, with a tab on each corner, red, green, blue and yellow, and we know what color they look like in the laboratory under good Earthly light conditions. So as we go across the surface of Mars, every time you photograph the landscape, you first photograph the sundial, the target. That allows you to then color-balance your images. It allows you then to figure out the color the rocks would really look."

The rocks are red, hence why we call this the Red Planet, but Nordgren says these rocks have varying shades of red which indicate crucial information about the rock composition and history. Discerning these subtle clues to Mars' history is vital to Curiosity's mission.

Nordgren says about Mars, "Now we`re beginning to realize that this was a planet that was warm and wet and could have been inhabitable for life. And maybe we`re right. But I`m willing to bet 100 years from now, we`ll find out we were still wrong in some way...And so it`s those new discoveries, those things that we can`t even anticipate that make this exploration so exciting."

The sundial Nordgren's team designed even has a special statement on it, which you can see in the concept sketch here.

Nordgren says, "We put a special message on this sundial around the base, in which it really talks about our history of our understanding of Mars. And what’s crucial to how science works, is that we talk about all the things we used to get wrong on Mars. We used to think it was a god, and it’s not. We used to think when we first figured out it was a planet that it must be a planet like the Earth. But it wasn’t. And then we started sending spacecraft and thought it was a dead, cratered land like the Moon, but it’s not."

The landing site for Curiosity is unlike any other previously attempted by NASA rovers. CLICK HERE to learn about this daring landing on Gale Crater. Nordgren expressed his excitement about this new choice for a landing site during his conversation with Rose.

"I think it’s wonderful! I just returned from a trip up to Yosemite National Park in northern California, and the things that make Yosemite spectacular are these giant rock walls and the granite and the history of the rock and the history that wore it away from glaciers coming through. And so when you think about trying to learn about the exciting past of a planet or a location, it’s those places where things are happening, where you have mountains and cliffs and valleys and canyons. So up until now, we’ve been very, very conservative about places that spacecraft have gone on Mars. They have been places that have been very flat, and very flat is very safe. But in the end, you don’t learn anything new from it because you’ve seen a couple places like that. That’s why we’ve begun to choose these new places, and with the new landing system, we’re able to land in a very precise area. So that allows us to find locations with nearby very exciting geologic features.”

You can watch the NASA coverage of the landing late Sunday night into the wee hours of Monday morning on NASA TV here.