Huguely appears in court, as judge rules no cameras at sentencing 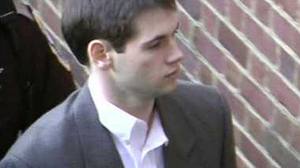 CHARLOTTESVILLE, Va. (WTVR)–George Huguely V appeared in court today, as the court ruled on whether cameras would be allowed at Huguely’s August sentencing.

In February 2012, the former University of Virginia lacrosse player was convicted of killing his ex-girlfriend Yeardley Love.

The Daily Progress and NBC29 filed motions to allow cameras in the courtroom, but Judge Hogshire declined media requests.

The attorney representing one media outlet said cameras should be allowed because the trial was over and there was no longer a fear of protecting the identity of jury members, reported Newsplex.com.

The Commonwealth’s attorney Dave Chapman was opposed to cameras, saying cameras could intimidate potential witnesses. The defense also opposed saying Huguely was appealing the verdict and cameras could impede his right to a fair trial in the future.

On June 5, Huguely’s lawyers Francis McQ. Lawrence and Rhonda Quagliana filed a motion to have the conviction thrown out in Charlottesville court. They claimed prosecutors withheld information from the defense.

Huguely is scheduled to appear in court Aug. 22 for a hearing to address his motion for a new trial. Should that motion be denied, he will be formally sentenced Aug. 30.

Huguely’s appearance has changed. He looked bigger and has long hair again; similar to the shaggy hair he had at the time of Love’s murder and his arrest in 2010. Throughout the trial he was very clean shaven and appeared quite gaunt.